Linus Torvalds has just announced the release of Linux 5.19. It should be the last 5.xx version, with Linux 6.0 coming for the next cycle:

The full shortlog (just from rc8, obviously not all of 5.19) is below, but I can happily report that there is nothing really interesting in there. A lot of random small stuff.

In the diffstat, the loongarch updates stand out, as does another batch of the networking sysctl READ_ONCE() annotations to make some of the data race checker code happy.

Other than that it’s really just a mixed bag of various odds and ends.

On a personal note, the most interesting part here is that I did the release (and am writing this) on an arm64 laptop. It’s something I’ve been waiting for for a _loong_ time, and it’s finally reality, thanks to the Asahi team. We’ve had arm64 hardware around running Linux for a long time, but none of it has really been usable as a development platform until now.

It’s the third time I’m using Apple hardware for Linux development – I did it many years ago for powerpc development on a ppc970 machine. And then a decade+ ago when the Macbook Air was the only real thin-and-lite around. And now as an arm64 platform.

Not that I’ve used it for any real work, I literally have only been doing test builds and boots and now the actual release tagging. But I’m trying to make sure that the next time I travel, I can travel with this as a laptop and finally dogfooding the arm64 side too.

Anyway, regardless of all that, this obviously means that the merge window (*) will open tomorrow. But please give this a good test run before you get all excited about a new development kernel.

(*) I’ll likely call it 6.0 since I’m starting to worry about getting confused by big numbers again.

Released a little over two months ago, Linux 5.18 implemented changes for faster compilation times, switched to the C11 standard (2011), improved process scheduling performance on AMD Zen, brought Btrfs updates, and many other improvements and new features. 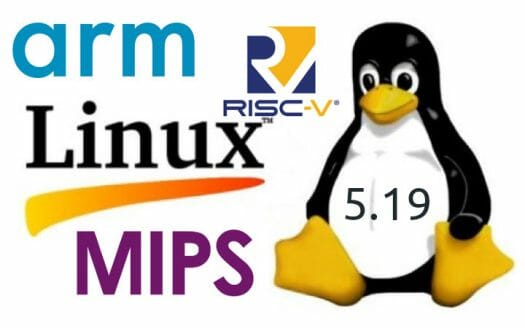 Some notable changes to Linux 5.19 include:

The MIPS changelog for Linux 5.19 could not be simpler:

There are more details in the list commits (38 in total) though, but I don’t normally need to mention it here:

Those look to be minor changes indeed. This was followed later with an update to build fix for Loongson-3 (fix compile mips cpu_hwmon as module build error).

The full Linux 5.19 changelog with commit messages only is available, and I generated it with the command git log v5.18..v5.19-rc8 --stat. Alternatively, you could check out a detailed summary on KernelNewbies website.

For anyone else who had a good laugh that Linux kernel development again happens on Apple Hardware (or thinks about trying it out), there are a few caveats: neither highest p-states for memory and performance cores nor efficient/real power management yet.

Interesting indeed. I wonder how the product managers at Intel and AMD feel about this.

As you’re in that github issue: are you running Linux on a M1 hardware? How is it? Usable for daily use?

> As you’re in that github issue: are you running Linux on a M1 hardware?

Nope, since then I could’ve generated MacBook Pro sbc-bench results on my own. BTW: Linus uses an M2 MacBook Air…

As for daily use better look somewhere else since my use cases are somewhat special anyway and I’ve no idea about status of graphics/video acceleration with Linux on Apple Silicon.

can someone explain what these changes will do for rk3588 machines?

If code gets into the latest Linux kernel, that means eventually people would be able to download the kernel from kernel.org and run it on hardware with Rockchip RK3588 processor.

This ensures systems run the latest code with security updates and new features but that will take a long time before it becomes usable. So basically, it does not change anything in the short term, but in the long term, people may be able to run the latest Linux kernel.

Ah I see, thx for your reply!

Does that mean, that currently available linux distro images from vendors(like for example debian 11 and ubuntu images from mekotroniks r58x) are build with old kernel versions which have been modified to run on rk3588? So rk3588 machines won’t run any other kernels but the modified ones?

One of my pet projects also landed in this release: you can finally build a single kernel for all Armv4T/v5 machines like we have been able to for all Armv6/v7 ones for a while: https://git.kernel.org/pub/scm/linux/kernel/git/soc/soc.git/tag/?h=arm-multiplatform-5.19-1 The practical application of this is of course not to run a kernel that includes all of them since that would be a waste of memory resources, but to remove all kinds of special cases that we had for some of the oldest platforms. It is also still common for distros to support two or three Armv5 targets, so those can now move to a… Read more »

[ maybe that’s a boring question, but what’s a strategy for data and storage energy (compatibility)(2030^), thx ? ]

[ considering Kernel development, storing (decompressed) header files like for AMD gpu’s on client side is a trade off between (open source) information and energy (storage), similarly for (increasing) firmware directory
this, it’s not only about servers energy (~2030 ~2.x% of global electricity consumption for data centers and network), btw
since growth is not fully compensated with efficiency gains, limits “of Moore’s law results in about [~]658 TWh for 2030” on “data center energy needs”
e.g. Kernel ‘make’ might benefit from a “clean arrange compress” flag with development on hold? ]