The Radxa Taco is a carrier board for Raspberry Pi CM4 and compatible system-on-modules that is designed for NAS applications with five SATA ports for 2.5-inch or 3.5-inch drives, 2.5GbE and GbE networking, M.2 sockets for expansion, and more.

The new board is the successor of the Rock Pi SATA HAT designed for the Raspberry Pi 4 SBC or Raxda Rock Pi 4 single board computers and supports more SATA drives, M.2 NVMe storage, optional WiFi 6, built-in RTC support, and so on. 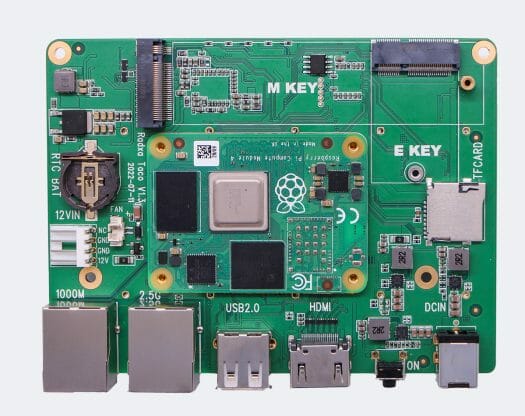 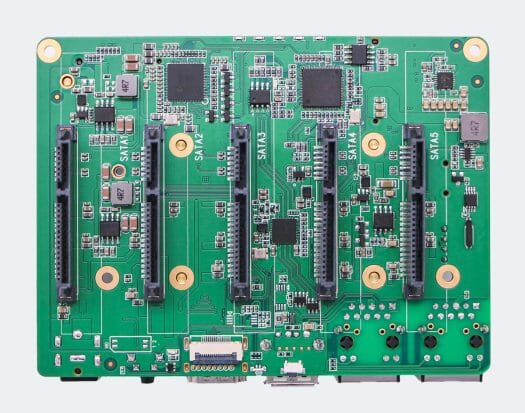 While in theory, both the Raspberry Pi CM4 and Radxa CM3 modules are supported, the wiki only provides instructions for the Raspberry Pi system-on-module. You’d basically have to flash the Raspberry Pi OS image to the module, and you’d be good to go, although there’s also a script to control the PWM fan:

One known issue is that booting from the M.2 NVMe SSD is not supported because there is no driver for the PCIe switch in the Raspberry Pi bootloader.

The carrier board is currently sold on Allnet China for $95. You’d need to add a Raspberry Pi CM4 (if you can’t source one), the power supply, and of course the drives.

So the m2 slots, sata, and 2.5 gbe are all sharing a single pcie 2 lane? What can you seriously do with this?

Yeah, I don’t think performance is the goal..
An old itx Intel J1900 would be cheaper and faster.. and about the same tdp
I guess the backplane design is cool, but not worth it..

> booting from the M.2 NVMe SSD is not supported because there is no driver for the PCIe switch in the Raspberry Pi bootloader.

Since when do PCIe switches require ‘drivers’?

PCI-E devices require an enumeration phase–basically the root port has to walk the tree and enable things (allocating BAR, etc.) as it goes. I’m assuming from what this article says that the code in the CM4 doesn’t know how to recurse into switches below the root hub to enumerate devices on them. I’m curious how Linux handles things in that half initialized state. It’s probably got code to recover such situations as I can’t imagine this is the first device with broken PCI-E enumeration.

> basically the root port has to walk the tree and enable things (allocating BAR, etc.) as it goes.

And that’s what the ThreadX routine to search for PCIe devices is obviously not doing. It’s not a ‘driver’ issue but an enumeration limitation of the primary OS every Raspberry has to run.

I’ve been told Allnet is working on an enclosure for it.

Every rpi up to the 4 had poor ethernet and I/O performance due to sharing *one* poor USB port for everything. Rpi4 comes out with more ports to make it better. Radxa: “Hold my beer.” Puts everything off of one port again.

While it’s true that everything relevant is again behind one port it’s a way to outperform a Gigabit Ethernet limited NAS on 2.5GbE since while the single PCIe Gen2 lane acts as a bottleneck it should be possible in real-world scenarios to get almost twice the NAS performance compared to GbE.

Jeff Geerling did some testing already a year ago with an older Taco variant though IMO the benchmarking/settings missed some details/optimisations.

Sorry I just add 10 HDD 3.5 on 1 slot of PCI e and it’s working perfect but I don’t know how to tell people or if people have question.

Anyone know if the Radxa compute module 3 is compatible with some of the waveshare boards (https://www.waveshare.com/cm4-eth-rs485-base-b.htm for example)?
Mainly interested in either ethernet port working (speed is not a problem); rs485 working; leds working; extra sd card working.