Details are limited since neither device is available yet, but both NAS are equipped with relatively powerful Arm and Intel processors and offer some innovative features. 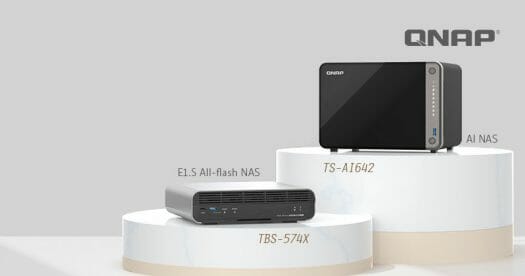 The main highlight is the 6 TOPS AI accelerator that boosts the performance of the QNAP AI Core engine notably in “QVR Face” facial recognition solution, “QVR Smart Search” surveillance event search, and “QuMagie” AI photo albums. This can be used to search your photos more easily, as well as for video surveillance applications that can benefit from the two HDMI output ports.

When I wrote about the QNAP TBS-464 NAS taking up to four M.2 NVMe SSDs in October 2021, I noted the ultra-thin design, but I did not realize it would remove one important feature of network attached storage devices: the ability to hot-swap drives. You’d need to turn off the device, insert the M.2 SSD, and tighten the screw whenever you wanted to add or replace a drive.

It turns out the industry has come up with the EDSFF form factor, mostly designed for data centers, that enables hot-swapping SSD drives among other things. There are three form factors: E1.L (EDSFF 1U Long) that’s  318.75mm long and designed for server racks, the more compact E1.S (EDSFF 1U Short) measuring 111.49 x 31.5mm and with a 5.9mm to 25mm thickness that depends of the use and type of enclosure, and the larger E3.L and E3.S for higher capacities and with a power envelope of up to 70W.

QNAP addresses the lack of support for host-swappable SSDs in the TBS-464 by taking up to five E1.S SSDs in the new TBS-574X NAS model.

The table above shows the various dimensions for E1.S SSDs, and that means most E1.S should work in the NAS, except for the thicker 25mm drive. The model with an asymmetric enclosure will probably be recommended for better cooling. QNAP says the TBS-574X is also suitable for 2K/4 video transcoding, real-time 4K video production, and business IT applications.

QNAP will officially launch the two NAS later this year, and we’ll know pricing at the time of launch. E1.S SSDs still appear to be hard to find, and for instance, nothing shows up on Amazon, except some PCIe to E1.S adapters. I also had a look at the Micron 7400 E1.S SSD, and searching for a particular model include looking in the product brief to come up with a part number such as MTFDKBZ1T9TDZ that is a 1,920 GB E1.S Pro bare SSD with 5.9mm thickness and sold on Newark for about $550, but out of stock.

More details may be found in QNAP’s announcement. Thanks to TLS for the tip.

Curious how networking on the TBS-574X is implemented. The CPU’s 20 PCIe lanes are obviously dedicated to the 5 NVMe slots…

Is the NBase-T network chip internally attached via Thunderbolt or USB?

QNAP tends to only use two PCIe lanes for the SSDs.

Well, I was thinking first “Why this rather beefy CPU?”, then checked count of PCIe lanes and compared with count of SSD slots. 2 lanes per SSD are perfectly fine when bottlenecked by network anyway. But why has this thing not more than 5 slots then?

Talking about their older TBS-464 mentioned by Jean-Luc: Jasper Lake SoCs with 8 Gen3 lanes max: so x2 per SSD ‘by design’. But how is networking implemented there w/o PCI lanes left? PCIe switch? USB3/RTL81256?

Intel CPUs has a native interface for Ethernet, unlike AMD that relies on PCIe.
As such, one port is always doable without losing PCIe lanes.

The TBS-464 has 2 x 2.5GbE and ARK and all Linuxium Jasper Lake reviews here on cnx-software agree, that there’s no internal MAC/PHY in these processors and the NICs found in those PCs are all PCIe attached 🙂

I only just now saw your edit, that’s an entirely different class of CPU/SoC that’s not in the device the news post is about.
QNAP has also been known to use a single lane of PCIe for NVMe in some devices.

Yeah, not sure what’s going on there, as they claim 4x PCIe 3.0 x2 for the SSDs. Had a look over at Nascompares, they don’t go into the specifics of the Ethernet controllers and the pictures aren’t clear enough to see a model name, but it’s Realtek chips.

Edit: Ok, it uses a pair of RTL8156B controllers. Some Japansese site had them listed.

Thanks for confirming. What a journey RealTek made… from the NICs every average user hated decades ago to NICs (even/especially USB3 attached) that simply work or even outperform the competition today 🙂

Well, I wouldn’t go that far. I’m having an Odroid-H3 with a pair of RTL8125 running th mainline 5.15 kernel and r8169 driver. I noticed the performance was barely average when serving NFS over TCP. Having a closer look I noticed that one performane-critical feature (scatter-gather) was disabled, causing TSO etc to be disabled. I re-enabled it, and found the machine wouldn’t talk to the network a few hours later. I tried to change the parameter, unload/reload the module, still no communication. After a reboot still nothing. Power cycling fixed the problem, so it was not just a driver issue.… Read more »

This industry has become a vast humbug.

What should the ‘industry’ deliver/advertise given TrueNAS/OpenMediaVault cover every basic NAS needs on every relevant platform?

Perhaps a network part consistent with the storage part at least one QSFP 28 10/25/40/100.
When a device has serial ports faster than network ports, should we still call it a NAS/Server ?

Sorry but you lost me. What are you talking about regarding these supposed fast serial ports ? Or maybe you’re speaking about SATA here ? If so, it’s irrelevant. Sure, you could probably expect much higher performance with a better chip, like AQC107, but then others will complain that there’s another bottleneck. In fact having high storage performance depends on the technology involved and can still be useful for soft RAID, when doing compressed backups or other situations.

Just 8L Gen4 + 12L Gen 3 and it uses Eth 2.5G and 10G USB adapters for the network part and boasts of the remaining two TB4s, each will draw different conclusions.
An I3 mobile and 5 E1 modules for a world first, don’t be surprised adding this thing to my list of CES 23 oddities.

Well, when thinking about the target audience 10GbE seems a good fit.

Who will buy this E1 thing? Mostly clueless consumer (or ‘prosumers’ spending an insane amount of money for the whole setup)…

Who ‘needs’ hot-swap? People who play RAID. Most probably RAID-5 and most probably with 5 SSDs all featuring same firmware and age (so they will fail all at the same time). Their (i)Mac Pros have 10 GbE.

If there were 8 additional Gen4 lines for the network part, I would have congratulated the thing.

It’s still a lightweight server with high read/write performance, it’s just that the network caps out at 20% of the capacity of a single E1 module, or 35% of a single standard Nvme module.

Finally, its use will be perfect for a nostalgic niche clientele of that not so distant time when it was the norm to use sas/sata with a 1G eth port.

BTW: I remember times where bunches of SCSI server disks were behind a 10 MBit/sec port while the average file size I worked with was 40 MB.

I’m quite interested in the intel version, only if it is possible to install a different OS thought.
Would there be a recommendation from your side about better alternatives? Important is low power consumption and small form factor (itx). Not interested in the hot-swap at all.

Nope, no idea about energy efficient small ‘all flash’ NAS boxes since our NAS needs now focus on ‘spinning rust’ based cold storage only and servers do virtualization + flash storage in a single unit.

So there’s not much else than Mini PCs, some ARM thingies and 1U servers like this.