Frore Systems Airjet Mini and Airjet Pro are active cooling chips that are just 2.8mm thick and quietly suck cool air in from the top of the chip before pushing it out the sides with the aim to replace traditional fan-based solutions in ultrabooks, or be integrated into VR headsets and smartphones for improved cooling.

Yesterday we saw that cameras could clean themselves with micro-vibrations, and it happens that processors can be cooled with vibrations too as the Airjet chips are comprised of tiny membranes that vibrate at ultrasonic frequencies to generate a flow of air that enters through inlet vents in the top and transformed into high-velocity pulsating jets exiting from one side of the chip. 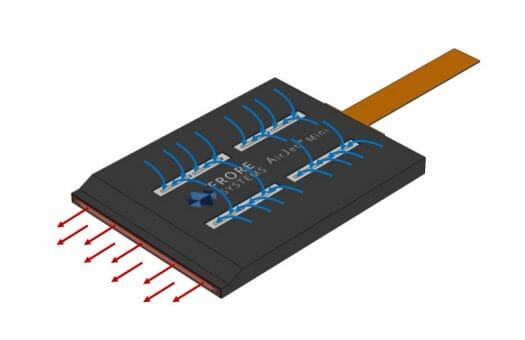 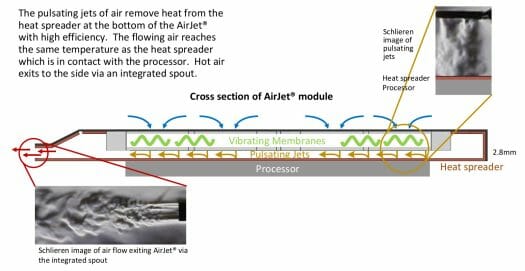 The AirJet module is actually not placed directly on the processor in ultrabooks but on copper pipes because it allows for thinner designs that way. The company says the AirJet Mini and Pro modules outperform cooling fans as they generate a much higher back pressure of up to 1750 Pa against just 195 Pa for a typical laptop fan, and operate silently at 21 dBA, while fans are noisier at around 42 dBA. The Mini can dissipate up to 5 Watts of heat, while the larger Pro models can dissipate up to 10 Watts.

The solution can lead to increased performance in space-constrained applications as modern processors have turbo or peak performance modes that can only last a short time due to thermal constraints. With a solid-state cooling solution is possible to extend that time or, in the case of Arm processors, operate at peak performance continuously, leading to significant performance improvements. Frore Systems claims to have practically doubled the performance of a passively-cooled 11.3mm thick Arm netbook with four AirJet Mini modules mounted to a vapor chamber since the processor could run at 3.5 GHz continuously, instead of falling back to 1.8 GHz with the fanless solution. 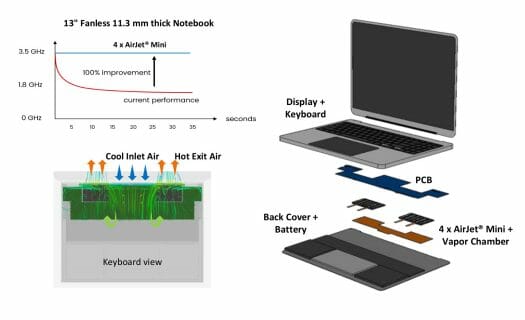 Doing the same with a fan-cooled Intel-based laptop and three AirJet Pro modules also improved the performance, but the system could not run at Turbo frequencies at all times.

The power consumption of the AirJet Mini is 1W, so roughly equivalent to a small 5V fan, and that converts into up to 4W of power consumption for the Arm laptop prototype above just for the cooling solution. It measures 27.5 x 41.5 x 2.8 mm and weighs 11 grams. The company has yet to announce pricing, but I would guess it’s only suitable for higher-end products at this time since they told PCMag that “we’re competitive relative to the value that we’re delivering”.

We’ll find out about pricing and how well it works soon enough since Frore Systems is currently collaborating with Intel and Intel laptop manufacturers with AirJet-cooled laptops expected later in 2023. Depending on the price, I could see it replacing many actively cooled solutions for systems with up to 28W processors, as well as being implemented into ultrathin designs for improved performance, but it might not be found in thicker fanless designs due to the additional power consumption and costs. Additional information may be found on the company’s website.

Mechanical components like HDDs and fans are main points of failure, apart from loose DIMM memory modules, so yes, get rid of fans. Noisy too, and power consuming. Not at any price though..

Il will start very expensive as it will only equip ultra-thin, ultra-expensive laptops, and will progressively reach mid-end devices and prices will drop. If it can work better than a fan, I wouldn’t be surprised if we eventually see it combined with peltier thermocoolers in some environments. Also peltier could be nice in laptops to recover a tiny part of the energy lost to heat (e.g. use it to power the airjet).

Some interesting discussion about this in the comments beneath the Liliputing article, along the lines of your comment.

I do not see how you’d use these in mid-range or more powerful devices, since these only scale horizontally, not vertically; the MEMS-membrane cannot be made thicker.Traditional solutions scale both horizontally and vertically.

I believe it might be possible to stack the modules, provided some air channels. Would that be efficient? Hard to tell, it might still overcome the fan approach. They have A LOT of ways to improve the design, staring with directing the flow inside the chamber to make it less turbulent (unless they already do it, but didn’t see that information). The biggest flaw in efficiency I can see is uneven pressure and flow across the chamber, also uneven heat distribution that would occur as an effect.

I was about to propose the same. Just enclose them in a thermally conductive copper block and you can double or triple the flow that cools it.

As the rep describes the tech, it relies on the airflow being perpendicular to the MEMS-membrane, which would seem to imply that you cannot efficiently stack them — as far as I understand, you’d need to leave quite a large gap between the elements for that small slit to be able to pull the air in in a perpendicular pattern and at that point a regular heatsink might well be a more efficient design.

I’m no physicist, though, so I won’t complain, if they prove me wrong.

Yes it should work if inserted inside a copper box. Think about sandwich layers of copper/airjet/copper/airjet etc with each copper layer tied to the base. All of them will evacuate some of the heat. Oh it reminds me about the Lasagna coolers (which used to rely on fans).

At 6:30 in the video, the rep implies that future generations of the product will benefit from better semiconductor manufacturing (I assume smaller process nodes).

It’s possible that this will scale to be able to cool workstation laptops, desktop CPUs, or even GPUs. But we should wait for the first laptops to feature this before getting too excited.

As someone that repairs laptops for a living I don’t see how these won’t become clogged with dust very easily. The amount of dust and debris in many laptops is amazing.

In the video, they say the laptop can be made IP68 with AirJet, so it would be possible to make a dustproof laptop.

One possibility could be to have a much smaller one connected in reverse to blow air back and expulse dust, or having a mechanism to increase internal pressure with the output corked and quickly releasing it to the input. Or combining that with the self-cleaning piezzo lens to shake the dust until it leaves.

“Because of the high back pressure, he said, the intake holes c﻿an be covered with an IP68 waterproof/dustproof material, allowing a laptop maker to prevent dust and other particles from coating the inside of a laptop.”

That 10x pressure actually makes it possible to dustproof these. Supposedly.

It certainly looks cool, but it remains to be seen how it will behave over time. The fans and turbines, although noisy, are quite resistant to dust and can run for years, even with a lot of wear and tear on the components. And what will happen to the dust here is not clear and so is the overall service life, both under ideal and extreme conditions.

Let’s see – 1 W to remove 5 W! For a 15 W processor that is ~4 W in cooling. That’s quite inefficient and will kill laptop battery (today’s fans are at <1 W). Also does it require a power supply? What is the size of that? What is the power consumption in that? Acoustics of 4 of mini will be about 30 dBA, same as a fan in a decent laptop today (they are being disingenuous in comparing the noise to a gaming laptop at 42 dBA. SurfacePro 8 is at below 27 dBA). What about the cost? If… Read more »

But was this piece paid for by Frore? For reporting disclosure purposes?

I saw the video on YouTube, read a couple of articles, and emailed them to Jean.

It looks like PCWorld just stumbled upon them at CES. But you aren’t the customer right now, OEMs are.

Don’t I remember a piezoelectric oscillating fan module being ubiquitous in surplus catalogs in the 80s? I wonder what took so long for that to evolve into this.

It’s a piezoelectric transducer with perforations within zones?