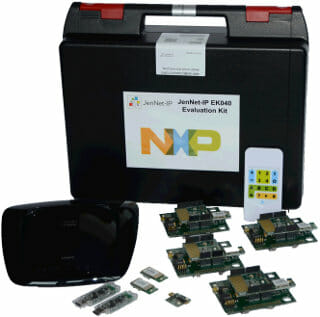 The JenNet-IP software stack is based on IEEE 802.15.4, and comprises the self-healing JenNet tree networking stack, the IETF 6LoWPAN IP layer, and JIP, an application layer enabling interoperability between devices. It can support up to 500 devices in your HAN (Home Area network) and each have their own unique IPv6 address in order to be accessed remotely. This kit allows development of home automation application that connects lights and home appliances to the network in order to monitor and control them over the Internet.

Watch the video below to see an overview of the kit, as well as a short demo showing the kit turn on/off individual boards and dim the lights via the remote control and a control software installed on a laptop.

If you want to know more about JenNet-IP software stack, read my earlier post “NXP to release “Internet of Things” source code“. By the way, it looks like NXP claim that it would “release the stack under an open source license by Q4 2011” did not materialize, or they really made it difficult to find…

The kit is available now, but apparently only in North America, and “selected distributors” sell it for $1,400. Further information may be available on NXP JenNet-IP EK040 page.