CoAction Hero is a tiny board based on an ARM Cortex-M3 micro-controller (NXP LPC1759), that makes use of  CoActionOS ecosystem that includes the hardware, but also an open source RTOS allowing multiple app to run concurrently, and a graphical interface to communicate with the board. 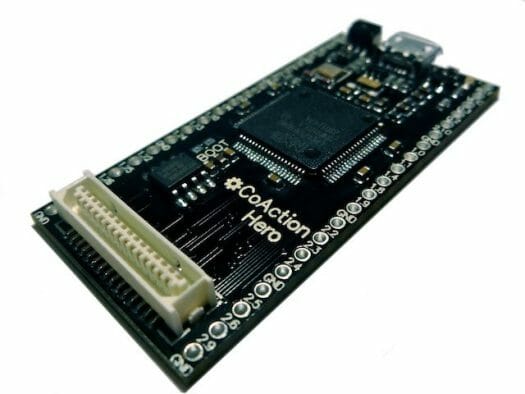 First, let’s have a look at the hardware specs: 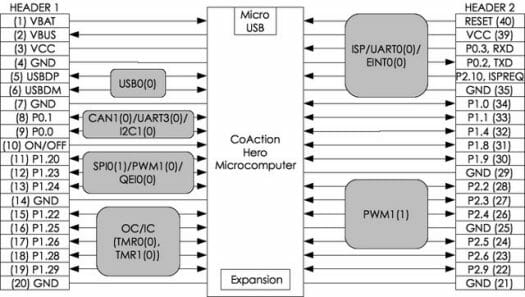 You can currently connect 2 modules to the board: Bluetooth and LCD device boards.

CoActionOS RTOS will come pre-loaded on the board, and if you don’t want to, you don’t even need to know it’s there, and it’s use will be transparent. But let’s have a quick look at this real-time OS, which allows multitasking on Cortex M3 MCU, supports an unnamed filesystem, and they also provide a C/C++ library to help with hardware peripherals (GPIO, ADC, SPI, UART,…) programming. 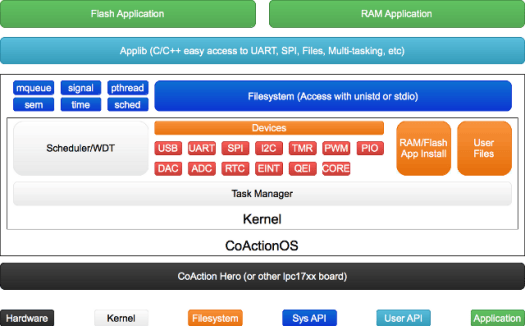 Documentation, source code, and tutorials are available on CoActionOS website.

The desktop development environment, based on Qt 4.8 and GCC, currently runs on Windows and MacOS, with Android and iOS support coming once Qt 5.x is available for those mobile OS. Linux may also be supported at a later stage. The board connects to your computer via its micro USB port, and CoActionOS Link software allows you to browse the board’s filesystem, provides terminal access, install programs, re-flash the kernel, and monitor running processes. They recommend using Eclipse for compiling programs. 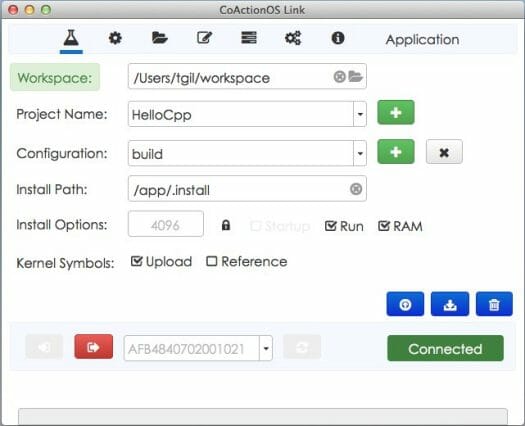 Several example projects are showcased on their kickstarter page such as driving a 1.8″ LCD, a DC Motor with PWM and PID, and an LED strip.

You can pledge as low as $29 to get the CoAction Hero board with a USB cable, and with a $99 pledge, you can add the Bluetooth and LCD expansion boards. Devkits should ship to backers in July 2013.

But I assume it depends on how we interpret words. Real concurrency does not exist in single core processors.

It appears to have only one core so I was a bit confused.

The post looks great! Please let me know if you have any questions. By the way, the OS uses pre-emptive context switching to run concurrent tasks and allows you to install/run multiple applications independently (which is very rare for MMU-free devices).

@Tyler Gilbert
pre-emptive multi-tasking goes back to AmigaOS and beyond, hardly ‘very rare’.

uclinux, rtems; pretty much any ‘operating system’ for mmu-less hardware will be expected to support it.

Right. Pre-emptive multi-tasking is not rare. But being able to build and install applications on a device without a memory management unit is rare. uCLinux can do it, but most MMU-less OS’s compile the application with the OS.