Geekbuying was kind enough to send me another RK3188 mini PCs for review. Tronsmart T428 is very similar to MK908 I reviewed earlier, with 2GB RAM and 8GB flash, but the latest device runs Android 4.2.2, its Wi-Fi module supports both 2.4GHz and 5GHz frequencies, and T428 can also be used as a Miracast Display. Geekbuying sells for the device for $96.99 including shipping, but before to buy the device I strongly recommend you read the review. I’ll post some unboxing pictures first, then carry on with my first impressions, video playback capabilities, Wi-Fi performance and some benchmarks.

I received the device is in the package below.

T428 comes with a short HDMI cable, a 5V/2A power supply, and a USB to microUSB cable for power. 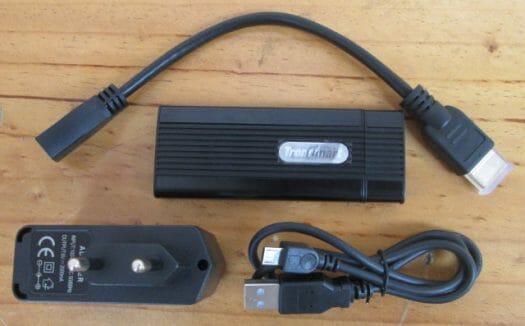 A close look at this mini PC shows the casing is made of plastic and metal (on the lengths), comes with an HDMI male port (my preference), a USB port, a microUSB port for power, an LED, a microSD slot, and a recovery button.

You can watch my unboxing video.

I’ve connected Mele F10 RF adapter to the USB host port, T428 to the HDMI port of my TV, and the power supply to the micro USB port of the device, and we’re ready to go. After a little while, we get a standard Android Home Screen (All apps added by me).

We’ve got Vol-/+ buttons, Power Button, and sometimes, but not always, the full screen icon… So mostly all good here. 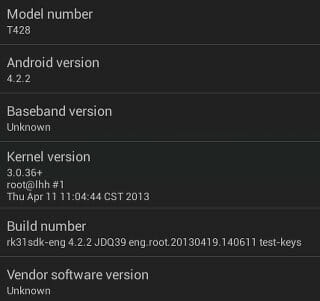 I’ve gone to the setup menu to configure Wi-Fi. The device also supports Wi-Fi direct, Bluetooth (built-in), and you can setup to device with VPN, as a hotspot, and add a 3G USB dongle, but there’s no Ethernet option.  The screen section lets you select 1080p or 720p modes at either 50 or 60 Hz, as well as 576p50 and 480p60. There’s also a slider to let you zoom in/out to adjust the UI to your screen. There’s no option for HDMI audio output, so HDMI audio pass-through is not available. There are plenty of options available in Developer options including USB debugging, CPU usage, GPU usage and many more.  In the “About device” section, the model number is T428, and the device is running Android 4.2.2 with Linux kernel 3.0.36+… The firmware version is 2013/04/19.

All applications could run smoothly, and the firmware is stable, [Update: I resolved Wi-Fi stability issue by updating my router firmware, see CS868 review for details] .  T428 does not overheat. I’ve also managed to pair a Sixaxis game controller (not possible with MK908 firmware), . [Update: I wrote instructions showing how to play Games with a PS3 Bluetooth controller]

I’ve just installed MX Player to test video playback, making sure H/W decoding is enabled for the video I tested.

I started testing with samplemedia.linaro.org videos from a CIFS/SAMBA share in Ubuntu:

I’ve also tried several full movies (AVI and MKV), and I did not notice buffering issues. [Update: A new router firmware mostly fixed the performance issue with this device, so I’ve also added audio codec and high-bitrate testing below]

Wifi Update: After updating the router firmware, I can transfer the same 278 MB file in 3m 02s (1.53MB/s), at regular speed, and the Wi-Fi signal does not drop any more. Since I’ve updated the router firmware, I can’t use my historical test results for comparison, and the only other device I’ve tested in this configuration is CS868 mini PC, which transfer tshe same file in 1m 30s (> 3MB/s). So even though Wi-Fi is snow table, and perfectly usable, the performance may not be optimal.

The device could achieve good results with both Antutu and Quadrant benchmarks.

Tronsmart T428 gets about the same score as HTC One X smartphone (Snapdragon S4 or Tegra 3).

Sorry nothing here today. I’ve tried to open the device, but failed, as some part of the casing seem glued, and as I pushed the metallic part of the casing, I could see I bended them a bit too much to my taste. I’ve also been told there’s no easy way to open it, so if you want an hackable device, this may not be the one for you.

[Update: Ian Morrison managed to open it (Click for pictures), but he mentions it’s not designed to be opened, an you’re likely to damage the case trying to do so]

Tronsmart T428 is fast, smooth and stable (as in no crashes or hung system) just like MK908, . [Update: Wi-Fi has become stable after a router (TP-Link WR940N) firmware upgrade]. This device seems promising: Full screen and power buttons, Miracast Display support, all video codecs I’ve tried seems to be supported fine, support for 5GHz can help if there are lots of 2.4Ghz Wi-Fi hotspots in your location …

After resolving T428 / TP-Link router interoperability issues by updating the router firmware, my assessment of T428 has completely changed, and the device is actually pretty good, with only minor issues, such as an internal flash partition for apps that I find too small (504MB), and fills up too quickly, the lack Ethenet  support (USB dongle),  no support for HDMI pass-through…

And what about T428’s alleged serial pins? Did you test them?

@Patola
I did not even manage to open the enclosure.

As a general remark: Why are you using MX Player instead of XBMC? XBMC using libstagefrigt promises to be a much better solution; especially if 5.1 sound can be passed thru ia HDMI to a proper receiver…..

@S
I believed it does not work yet with RK3188. I’ve read the only solution is to use XBMC custom XAF which uses external players such as MX Player. There’s no option to select HDMI pass-through (for now) in the 2 RK3188 devices I’ve tested.

I use BS Player (paid) and VPlayer (paid) because I like them better than MX. Both offer h/w or s/w decoding, also.

You must plug adapter to USB cable, not to USB port. When adapter is so close to WiFi module you will have network transfer issue.

What about the network performance with a usb to ethernet adapter ? Is it full speed (~10MB/s) ?

@Salah
I don’t have one, so I haven’t been able to try.

Interestingly, I’ve been told some people on freaktab think T428 has better Wi-Fi than MK908. (I can’t find the link, since the site if not part of Google index). So it could be hit or miss, or some issues with specific routers.

Kind of strange. I ordered the T428 at the end of April and it arrived yesterday. I did not do any pre-reading and loaded xbmc froyo 12.1 stable version and it runs great. I have read some have crashes and some don’t run at all. Also, some report antutu does not run, but mine (and yours) run great.

Hi – just got mine yesterday, very pleased with it but many minor issues. Here are my experiences so far, learn and be prepared 🙂 WIFI/ETHERNET: I had issues with wi-fi upon first connection – wouldn’t connect at all. Somehow it seemed to resolve itself and now no issues especially when I was closer to the router. I also used an ethernet/USB cable and that was fantastic but after an hour or so it kept cutting out, not sure what that issue is. I will test the cable with another device to see if it’s the device or the cable.… Read more »

I’ve updated the post since I solved the Wi-Fi issues with a router firmware upgrade.

@Nickyp
I often got microSD stuck into those device, and I had to open the cases to get those back. I did not find a safe way to open T428 either.

Update on ETHERNET: I found the following, and it works every time. After booting up, I have to unplug then reinsert the USB to Ethernet adaptor. It will then work fine for as long as you want. Streaming HD sweetly from Youtube for as long as I wanted. Here is the probelm. If you go to SETTINGS for any reason the Ethernet adaptor stops working and things start freezing up. You don’t have to do anything in settings, just merely going to the settings page causes this problem: solution is to get out of settings when you can then remove… Read more »

BTW if anyone figures out to get mic input into one of these and gets SKYPE etc. working without crashing on the T428 be sure and let us know how you did it!

How did you take the screenshots for the article? I assume the normal phone screenshot method wouldn’t work as well?

@Scott
I’ve installed one the screenshot utility available on Google Play. They’ll show an icon overlaid on top of the UI, you click on it, and it takes a screenshot.

Update on Stock 4.2 Rom (Link on Geekbuying Website): I installed this last night.This 4.2 Rom has worked very well for me. It has increased speed for sure, All my usb drives are now recognised and usable, including card reader, memory stick and even a seagate usb external drive. Wireless and Ethernet are working well. The only issue now for me is audio input which hopefully can be resolved with a usb audio device. Then, it is entirely feasible for me to dump the desktop.

@nickyp
Does that means the mic in your webcam does not work with this device? They must have tested audio with Skype, or that’s pretty useless…

Any advice on using the T428 with Google Play? I seem to download SD version of videos even though the device is HD capable. Fast forward or backward seems to cause the device to “sit there”. I noticed the device won’t make use of the 8GB SD card I installed.