UBM releases a study of the embedded market every year, by surveying over 1,000 embedded professional every year. They’ve just published their 2013 Embedded Market Study (85 pages report), after surveying over 2,000 engineers and managers, so let’s see whether anything has evolved in the software development and processor space compared to 2012.

C/C++ languages still rule the embedded world with 81% market share, although a little less than last year (85%), assembler is a distant third (5%). 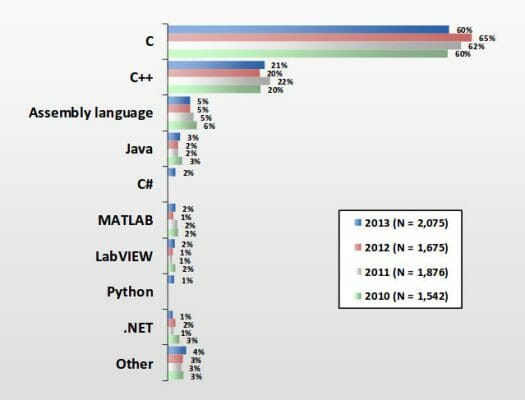 About a third of project last less than 6 months, another between 6-month and a year, and the last third over a year, with project lasting 12.5 months on average.

Projects life cycle breakdown shows much more time is spent detailed design stage, and a bit less on testing and debugging. Another interesting point is that only 1% of the time is now spent on documentation,  so either people gives even less of a damn about documentation than the previous years, or everybody has become highly efficient at writing docs.

AS with previous years, the operating system choice is mainly influenced by software engineering staff & managers (62%), but it’s still sometimes decided by corporate management (17%). The top three reasons for OS selection are a little different from last year, as real-time performance, although still important (29%),  has been kicked out:

54% of respondents are currently using or consider using embedded Linux in their next project because it is low cost (66%) and easily adaptable and extensible (52%), but 47%, a bit more than last year, would not consider embedded Linux mainly because they don’t need it (72%), but also because of software/app/driver incompatibility (18%)  and performance/real-time capabilities (15%). Legal reasons seem to have become less important, as only 6% consider it an issue with  embedded Linux, compared to 14% last year. 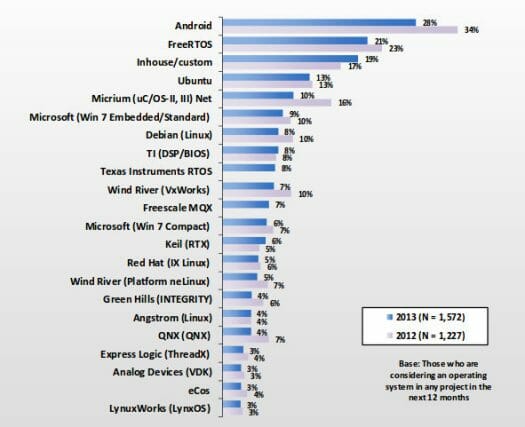 Overall there has been very little changes and Linux share, including Android, is still strong with about 60%, compared to last year 70%. I’m a bit confused with the chart above, as most OS seem to be stable, or have lost market share, but only In-house OS and Keil have gained slightly.

When asked to cite one and only one vendor with the best ecosystem for the needs of the respondent, Texas Instruments still gets the lead (19%), followed by Freescale (12%) and Microchip (10%) in just the same order as last year.

According to the points above in UBM survey, there hasn’t been drastic changes between 2012 and 2013, but there are still some long and slow trends over several years, such as the increased share of open source operating systems, and the predominance of 32-bit processors.

Perhaps you could explain why the os popularity is so different from distrowatch rating. First time i have ever heard of for example freertos

@Sum fool
Sure, it’s a completely different survey. It looks like distrowatch monitors desktop/server OS usage, but UBM survey is about embedded systems, including real-time operating systems running on microcontrollers. For example, FreeRTOS also runs on 8-bit and 16-bit MCU, with kilobytes of RAM and flash.