The DigiX, by Digistump, is hobbyist board with an Atmel SAM3 Cortex M3 MCU @ 84 MHz, embedded low power Wi-Fi (b/g/n) and mesh networking,audio output, USB on the go support, and the company claims it is 100% compatible with anything that works with the Arduino Due, with some extra I/Os for a total of 99 I/O pins. 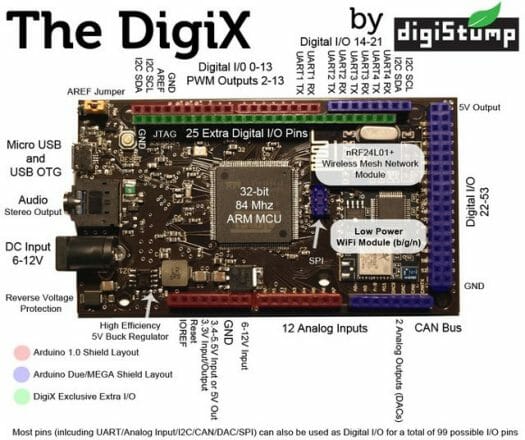 The hardware specifications go as follows:

They did not disclose the Wi-Fi module model, but it embeds all TCP/IP stack, consumes an average of 5ma in active mode, and less than 2uA in sleep mode, so the Wi-Fi processor in the module looks similar to TI SimpleLink CC3000 [Update: The Wi-Fi module is currently from USR, more details are available in the comments section]. You can just use Arduino 1.0.5 IDE for development, load one of the sketches for Arduino Due, and it should work out of the box. The board will be compatible with several IoT cloud services such as Xively (formerly Pachube), ThingsSpeak, and Temboo.

For an easy comparison, Digitstump setup a table between DigiX and products for similar applications. The UDOO is a bit in a different league, and its $109 version already includes Wi-Fi, but overall the comparison is very interesting.

The board is ready-production, but they launched a Kickstarter campaign to bring the cost down. There are now just 2 pledges possible for this project:

You can watch the video below for an overview of the board, and see some examples such as an audio player.

On a separate, yet somewhat related, note, if you’re interested in adding Wi-Fi + 2x Ethernet to your Arduino board, you may want to have a look at URUK Wi-Fi Router Module.

Didn’t even had time to transform my cubie in a squeezbox server.

@roel
Finding the time, and sometimes motivation, to play with all those boards is the main issue.

About Squeezebox, it seems Wandboard is the preferred platform now: http://www.communitysqueeze.org/quick_start_guide.jsp
Or maybe what you want to achieve is different.

@deets
Yes, there are cheaper options to add WiFi to an Arduino Due, like this $44 module, but still it’s more than DigiX when including Arduino Due price. If you already have an Arduino Due, it’s another story.

@Jean-Luc Aufranc (CNXSoft)
First of all – thanks for the write up!
We are actually using a module from USR – similar to the USR-WIFI232G – though we are taking a last minute look at a completely custom module depending on how the funding goes.

We did not use the CC3000 because of the rather high 92ma consumption in Active RX mode.

I’m reworking our layout right now to see if I can’t fit a microSD and EEPROM on the board as well!

What I meant to point out was that is the module used on the digix.

@deets
@Erik Kettenburg – Digistump LLC
Ah! Thanks for the update about the Wi-FI module.

@Erik Kettenburg – Digistump LLC
What chip are they using inside the USR-232G?

@deets
Yep probably the AR4100
We started with the USR-WIFI232-L as deets pointed out – which has the AR4100, we’re switching to the USR-WIFI232-G because they squeezed a few more features in. I’ll tear one down when the new ones get here in a few days.

Actually probably not AR4100. It has ATSAM4S inside. It would not need the RF shielding if it was using AR4100 and has additional matching circuitry as well. So probably something else, maybe marvell?

@deets
I found the FCC photos. It is SAM4S. I can’t read the markings on the wifi chip, probably some USB wifi.

What software is running on the 4S? Like LWIP but where do they get the 802.11 support. I’ve looked all over for open source support for 802.11 on something like a 4S without any luck finding it.

Most wifi soc are proprietary firmware & api under NDA but these modules are getting cheap enough that it isn’t a big deal.

@Jean-Luc Aufranc (CNXSoft)
I followed the link to the communitysqueeze but it is based on fedora. So I prefer to buid one on my own with cubian or alarm. Then I can build it completely to my taste.