Flappy Bird is a ridiculous fad, and I promised myself not to write about this silly game. I managed to resist when somebody showed off their Arduino powered real-life Flappy Bird, but then XDA developers mentioned one of their member posted instructions to customize Flappy Bird game. I thought it might be fun to personalize the game with pictures of friends or family members, and at the same time, learn how to hack apk files. Instead of real persons, I’ve replaced the original bird, by Tux, the official Linux mascot, flapping wings not included. 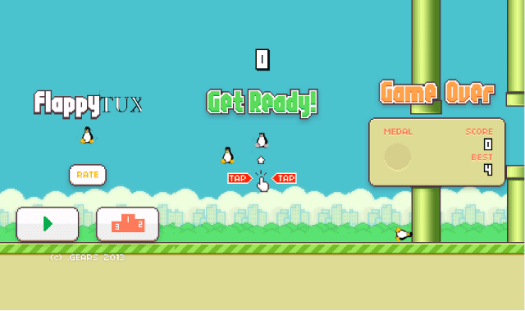 The instructions in XDA dev forums are mainly for Windows, but I’ve adapted them to Linux, and “created” “Flappy Tux” from Ubuntu 13.10. I’ll assume you’ve already installed OpenJDK and the Android SDK and have a working Android app development environment. I think we just need adb and aapt from android-sdk-linux/platform-tools/bin to be in the path.

as well as the original Flappy Bird apk.

You are now ready to install the framework file and create a workspace from the apk:

Time for a little work in gimp, or other graphics editing software, to modify the game graphics and strings:

After you’re happy with the modifications, you can recompile the app:

At first, this failed for me, as aapt was not in the path. I copied it to /usr/bin

You’ll also need to sign the apk, or Android will refuse to install it. First generate a keystore, e.g.:

Copy flappytux.apk to your device, install it and have fun.

You can also just download flappytux.apk if you just want to try it out.

Hi,
I made a “real” Flappy Tux with the artworks from SuperTux and with flapping wings 🙂 It’s running on Windows, Mac and Linux and can be found on my homepage.