I recently decided I had enough of my Nokia C6-01 phone, and decided to look for a Chinese smartphone with the following specifications: quad core processor, 5″ to 5.5″ display (720p resolution), at least 1 GB RAM, at least 8 GB flash, GPS, Wi-FI and 3G (UMTS) support, all that for about $200. It also had to run Android 4.2.x as I want to give Miracast a try. Ideally, I would also have liked a phone with Bluetooth 4.0 LE in case an Android 4.3 was in the work. But since Bluetooth versions are rather a game of luck in Chinese websites, I did not put too much importance to this last point. I finally went with ThL W200 as it matched my minimum specifications, the price was right, and it got a few people excited over at XDA Developers Forum. I bought the white version for $187.20 on DealExtreme, but there’s also a black version which was more expensive at the time, but now costs $185.50. 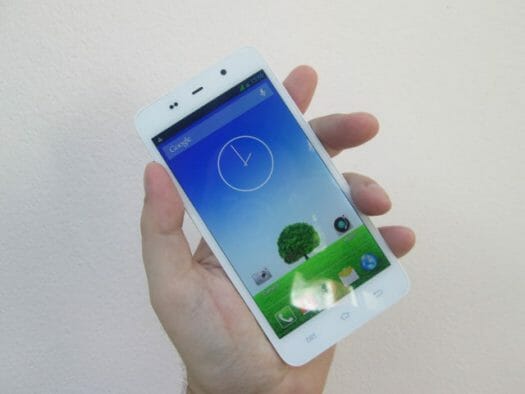 The phone comes with two 1800 mAh batteries, a pair of headphones (120 cm cable), a 5V/1.5A power adapter, a USB cable for charging and data, a screen protector, and a rather useless Quick Start Guide in English as it just shortly explains how to use Android. The headphones do not have a vol +/- button which can be somewhat annoying.

Let’s have a closer look at the device.

We’ve got three buttons under the display: menu, home, and return, and on top the 5MP front camera, status LEDs, and the light sensors. The 8MP camera and flash, as well as the microphone, can be seen at the back of the device. The headphone jack and micro USB port at located on the top side, volume +/- on the left, and the power button on the right.

To insert a micro SD card, and/or one or two SIM card(s) remove the back cover. Even with the battery in place, which came with about 60 % charge, the phone feels very light.

That’s all for today, I’ll give the phone a try for a few days before writing a review. I plan to write something similar to what I did for the Zopo ZP900S Leader review, but I’m obviously open to suggestions.

Hi!
Can you please confirm that the weight is really 118g with batteries?
Because other sites, like Gsmarena, says it is “Net Weight(Including battery) 152g”

The Chinnese name of THL is TangHuLu(Toffee hawthorns), nothing to do with The Happy Life…