Shenzhen Tomato has sent me a sample of HD18T, an Android TV box powered by Amlogic AML8726-MX dual core processor that features a DVB-T2 tuner with In and Out antenna connectors. This is quite timely as Digital TV in Thailand has just started on April 1st of this year. Today, I’ll go through the specs, unbox the device, and show some pictures of the box, the board and DVB-T2 tuner.

The device enclosure and specifications are very similar to EM6-S2 DVB-S2 Android TV box I covered previously, expect the DVB-S2 tuner is replaced by a DVB-T2 tuner:

I’ve received the device in the following package via Fedex with icon with DVB support, Skype, Youtube, Netflix, Facebook, Twitter, and Android Jelly Bean, which are all pre-installed. 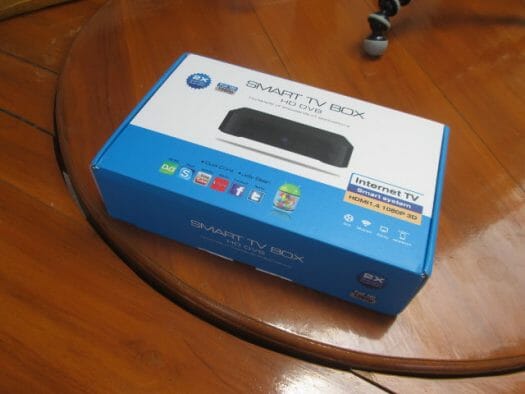 Inside the package, we;ll find an IR remote control (2x AAA batteries not included), the user’s manual in English, the device itself, an AV cable, a plug adapter, and a European-style 12V/1.5A power adapter.

Since Shenzhen Tomato caters to wholesale customers, options may vary for retail packages, and you may end up with an HDMI cable too for example. Let’s have a closer look at the media player’s connectors.

There’s a SD/MMC card slot, two USB host port, and an Ethernet port on one side, and a 12V power jack, optional S/PDIF output, AV output (composite + stereo audio), HDMI, and IN and OUT antenna connectors for digital TV. There’s also a LED and an IR receiver on the front panel which can’t be seen on the pictures.

You can also watch the unboxing video below.

HD18T Board and Tuner Pictures

Time to check out what’s inside the box. After removing 4 sticky rubber pads at the bottom, and untied four screws, we can see there are two boards: the mainb oard and the DVB-T2 tuner connected via a flat cable.

There’s not much else to see here, except the Wi-Fi & Bluetooth module is Broadcom AP6181.

After removing three more screws, we finally get to see to boards up close. There’s a heatsink on the RAM, flash, and Amlogic SoC, and you’ll also noticed a recovery button at the back of the AV jack. The main board is marked HD18T v1.1, and the DVB-T2 tuner board marked HD18T-T2 V1.1, both designed in October 2013. I assume they just change the latter for DVB-S2 tuner, or ASTC tuners and keep the main board identical between different products.

I’ve removed the shield from the tuner, and taken a picture of the board. There are two ICs. The smaller inside the shield is NM120AA (origin unknown, but found in other models) but I could not quite clearly read the markings on the larger one, but it might be Silicon Labs Si2168 DVB-T2/T/C digital demodulator.

If you are a reseller, you could consider purchasing the box in quantity via Shenzhen Tomato, who provided this sample for review. Individuals can buy the device from Geekbuying for $93 (called EM6-T2), on Aliexpress for $70 and up (mostly known as Vigica C6), or DealExtreme ($85.28) among others.

I plan to focus mainly on DVB-T2 features: scanning, live TV, and PVR functions using the provided DVB app in my review, but it may take a while, as the box only has auto-scan settings for France, Taiwan, Australia, the UK and Italy, so I may need to do a manual tuning after finding out what the right frequencies are… I’ll also need to buy an antenna… So you may have to be patient 🙂

do these devices have signal booster for t2 reception

You can not access the TV tuners from XBMC because the is no compatible PVR software for Android, like example a port of TVheadend

I highly doubt it has TrueHD or DTS-HD pass-through on an Amlogic 8726-MX part, probably just regular Dolby/DTS.

I would love to get my hands on this device, I ordered one from Mobase Aliexpress and received instead the Minix X7 (after freaking three months).

@Harley QUOTE XBMC needs a PVR backend and there are no compatible that run on Android QUOTE Yes XBMC needs a DVB backend and tvheadend is not available for Android. However MuMuDVB is available for Android https://github.com/braice/MuMuDVB QUOTE The [configure options] specific to MuMuDVB are: … –enable-android Support for Android (default disabled) … UNQUOTE and a quick web search reveals that MuMUDVB should work as replacement for tvheadend as a DVB backend for XBMC. Details at http://www.mumudvb.net/doc/mumudvb-1.7.2/README.html#_xbmc_for_xbox_originally under 20. Using MuMuDVB with “particular” clients — 20.1. XBMC (for XBOX originally) So it should be possible to use XBMC with MuMuDVB… Read more »

I have the same box DVB S2 version, and really like I said before, the DVB part is a total mess, very basic, slow and buggy, TVbackend work but it didni’t reconize the tuner, the drivers apparently are build with the kernel not like an external module, for the time being is totally not working
@cnx
please if you could do some deep investigations on the integration of a TVBACKEND, like MuMuDVB or TVHEADEND and make it work with XBMC, that will be much appreciated
thx

@natsu Shenzhen Tomato continuously delayed shipping for the box to make it better, so some of the issues may have been fixed. @Harley also talked to me about mentioning XBMC + TVbackend in a blog post, and that could make a project, but I don’t feel comfortable, 1. Because I don’t want to be too much involved, 2. Because I may not really what I’m talking about without spending some serious time studying all it all integrates. Now if somebody who fairly knows how everything works, and is ready to mentor people who may want to take on this project… Read more »

You can make double biquad antenna that works in Thailand like this one https://www.facebook.com/photo.php?fbid=10203313791628290 (unfortunately, now digital TV is controlled by …)

@Ohmohm
Thanks. Nice DIY antenna… I think I’ll try at my sister-in-law house, I’ve noticed they have a roof antenna. I’m not sure it’s still connected though.

Would you know where I can find the frequencies for the different channels. I’m not sure autoscan with work with that box since I can only select pre-set autoscan frqequencies for 5 countries.

@Jean-Luc Aufranc (CNXSoft)
Channels could be 42, 50, 54, 57 and 38 according to NBTC frequency plan http://broadcast.nbtc.go.th/tvwave/ (contains English PDF)

@Ohmohm
Thanks! Exactly what I was looking for.

I had purchase this box and use it at Singapore, android system work ok. But this device cannot receive any DVB-T2 signal from singapore free to air tv station. either i search auto or manually. So beware if you want to use it as ur DVB t2 receiver.

@JB lang
Thanks for that report. I’ve been unable to get any signals either, but I thought it was because I used an indoor VHF/UHF antenna, and it was not enough. So maybe there are other problems.

I’m waiting to get a working reference box to try it again.

Can this DVB-T2 be used as a DVB-C? Can someone test it, pls?

This box do not work with Singapore DVB-T2 for sure, however DVB-T works well. A simple indoor antenna should be enough to receive the signal. If you dun try adjust the position of ur antenna. My advice, do not buy this box if you want use this box as DVB-t2 receiver, the android system is very basic, it do not support the latest XBMC 13.1. It good to purchase a standalone quad-core android box and a dvb-t2 receiver.

Hi cxnsoft how was the HD18T at playing 1080p MKV files in XBMC? Was it smooth playback or was there a bit of stutter?

@Chris
Since I have not been able to make DVB-T2 work yet, I haven’t tested it at all. Still waiting for a free STB from the government to have a reference platform…

@Ohmohm
I’ve finally made an antenna by the result is not good. 0% signal strength.
http://www.cnx-software.com/wp-content/uploads/2014/12/UHF_Antenna_fail.jpg

Unless, my box has some issues.

I bought this device from DX.com a year ago and it is working fine, i am using it mainly for DVB-T reception and watching movies.

Hi,
I bought a ISDB-T version one from Ali Express 4 years ago and after some time it starts to freeze in the Android logo. I tried to make a firmware update but I think that something went wrong and now only the blue led is on but I have no signal in the TV.
Is there a way to unbrick this device?

@Mauricio BR
Try to do an update with USB burning too. You’ll need a IMG firmware, not ZIP.
https://www.cnx-software.com/2016/11/06/amlogic-usb-burning-tool-still-sucks-in-2016/