Geniatech has historically been the company which first delivered set-top box and media player solutions based on Amlogic processors. I’m not sure it’s still the case with Amlogic S802 and other S80x SoCs, as other companies appear to have released their products first such as Tronsmart Vega S89 and M8 Android TV boxes, but Geniatech ATV582 based on Amlogic S802 quad core processor has been available since April under the company’s retail brand Mygica.

The device runs Android 4.4, and comes with an HDMI cable, a user’s manual, a power adapter, and an IR remote control. You’ll notice does not quite have all the feature of most other S802 boxes, as BlueTooth and optical S/PDIF are missing, and there’s only 1GB RAM. Based on that video, the device also comes pre-installed with XBMC, and the same Metro-like user’s interface. 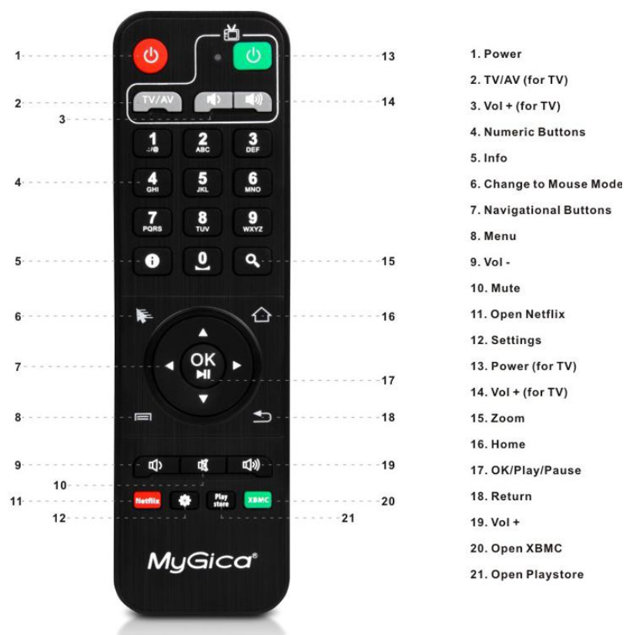 The infrared remote has a mouse function (probably frustrating to use), as well as Netflix, XBMC, Google Play buttons that I’ve never seen on remotes. It looks like it can be used as a universal remote for your TV as some buttons (Power, Vol +/-, AT/AV) are reserved for that.

MyGica ATV582 can be purchased on Mygica Aliexpress store for $139 including shipping. That’s about $40 more than other entry level media players based on Amlogic S802. More information may also be available on Mygica ATV582 page.