The fourth prize for this week is Matricom Gbox Midnight MX2, an Android TV box powered by Amlogic AML8726-MX dual core processor with 1GB RAM, 4GB flash, HDMI and AV output, optical S/PDIF, Wi-Fi and Ethernet, and 4 USB ports. The company had specifically worked on the XBMC port at the time, and I found it did a pretty good job. 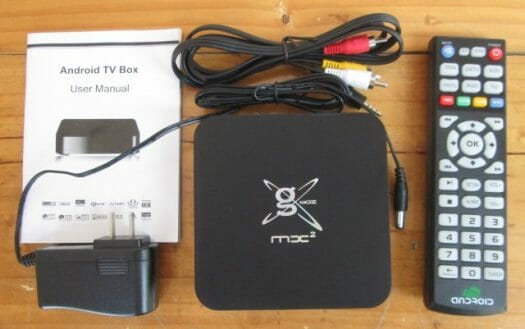 I tested the device in May of last, and I found the firmware to be very stable and responsive, and XBMC works as expected, supporting most video files without issues, except some MPEG-2 had aspect ratio issues,, RMVB files would make XBMC exit, and WebM 1080p could not be played smoothly due to software decode for this particular codec. It could decode all high-end audio codecs such as DTS and Dolby just fine. I did have problems with composite and component outputs but it must have been fixed now. It also had very good Wi-Fi performance until I upgraded my Wi-Fi router and Wi-Fi throughput took a hit, but was still usable. The other nice thing about this device is support for OTA updates, and albeit the device was released around May 2013, the firmware is still continuously improved, and the latest Beta 1.1.9 has been announced on June 14 in Matricom forums.

Matricom Gbox Midnight MX2 can be purchased on Amazon for $105.

All right, I am the first, count me in!

Greetings from Bangkok, I’m in too!

Let’s give it a try…

Count me in too 😉

Nice box. Count me in!

Sweet! Please count me in.

Wow, there is another one! Nice!

Count me in! Thanks for offering this!

That would be great to some TB of movies to work.

Wow would love to catch this one !

I am in too

It will be mine.

One of the best media players

Oooooh nicey. Count me in!

This one is really good!

One for me too!

Pick me, pick me

Count me in, please.

PLEASE count me in… 😉

Count me in too

Your getting more comments every time you do one of these

Great idea the giveaway!!! Thanks!

Sounds good to me

I got this as a gift for a friend, not a bad box, tho it does freezes sometimes, even on the latest beta firmware.

I so want this. Pick me!

Pick me! Pick me!

Glad I catched the chance, even if it’s late 🙂

I pray the old gods and the new gods that they favor me in this contest!!!! count me in!!!

Have desperately been wanting to play with one of these. Every time I get ready to kids, car, or Dr derail it. Probably the only chance I will have to get one anytime soon.

No answer from the first winner, so I have to do another draw…. Random.org says: 45, starsolaris is the winner!

I’ve contacted you by email.