Gearbest sent me MXQ S85 Android media player powered by Amlogic S805 quad core processor with 1GB RAM, 8GB internal storage, and Ethernet/Wi-Fi/Bluetooth connectivity. MXQ S85 looks very similar to EM6Q-MXQ, another Amlogic S805 based Android STB, which I reviewed last week, but these are two distinct hardware platforms. Today, I’ll take some pictures of the devices, and the board to see which components are used, and who made the board, and I’ll write a full review in a few days.

I’ve received the parcel via DHL in the nameless package below where they just indicate it’s and Android TV box with a quad core processor, quad core GPU, pre-loaded with XBMC, and supporting HEVC / H.265 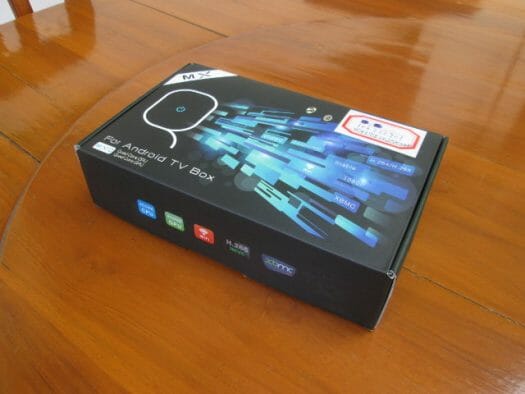 The package contains the box, HDMI and AV cables, an OTG adapter, a 5V/2A power supply, an IR remote requiring two AAA batteries, and a user’s manual in English. The company also included a US plug adapter outside the product package.

One quick way to differentiate between MXQ S85 and EM6Q-MXQ is the MX test on top of a red band that’s specific to MXQ Q85.

There’s a power button right on the center on the top of the enclosure. On one side, we’ll find a micro SD card slot, a micro USB OTG port, as well two USB 2.0 ports, and on the rear panel, we can see the DC power jack, the AV output (composite + stereo audio), an Ethernet port, and HDMI port, and optical S/PDIF.

If you prefer an unboxing video, here it is.

There aren’t any screws on the outside of the case, so you need to use a flat-head precision screwdriver to pop-up the bottom of the enclosure.

The sticker make it clear it’s yet another board made by Shenzhen Netxeon Technology, and that the board features on Amlogic S805 with 1GB RAM, 8GB storage, and AP6210 Wi-Fi module. There are also some though holes that could be interesting,. But let’s remote four screws to completely take the board out of the case.

Contrary to EM6Q-MXQ, there aren’t any metallic plate inside the enclosure so the box is much lighter, and we’ll have to see if it has any consequence with regards to power dissipation. There’s no heatsink either, but instead a gray sticker, which I peeled and put on the left side in the picture. The board is named S85_V2.0_20140716, and definitely made by Netxeon… Beside the S805 processor, two MIRA P3P4GF4BLF DDR3 chips, and a 8GB 29F64G08CBABA NAND flash are soldered on the board. We can also confirm AP6210 is indeed the Wi-Fi module (2.4GHz) chosen for this product. Some of my readers bought TV110 media player, also powered by Amlogic S805,  and they are now unable to flash an updated firmware since there is no recovery button, but luckily S85 does feature one just at the back of the AV output jack. There are also three unconnected header including one that looks like a JTAG header, and the one of the two 4-pin headers must be used to access the serial console.

Gearbest currently sells MXQ S85 for a little over $50. There are two versions: one without Bluetooth, and one with, which costs about $6 more. Other shopping options include Dealsmachines ($49 – allegedly with Bluetooth), DealExtreme, Amazon US, and Aliexpress.

Thank you for this new test on processors S805.

Yesterday I had my camera EM6Q-MXQ I did solders to connect in Serial and already a problem with the RX is not working, while my welds are well done, no short juice.
By removing the GND, I managed to stop the bootloader to read his version : m8b_hd18q_1G
Yet another obstacle, this version is not provided publicly, and I think even less Kernel.

To you the opportunity to know the bootloader of S85 MXQ ?

We are still far from having boxes ARM Linux can be complete and very stable.

I think S805 is meson8_baby or something like that (with baby).

I have not tried the serial console on the board yet. I’ve noticed that, for some reasons, there’s no real Linux community for Amlogic processors, like there is for Allwinner or Rockchip.

I’m getting the MXQ S85 (and 2GB S802 MXIII) to play with Linux, probably in Nov I have some time to start and work on the devices.

@Jean-Luc Aufranc (CNXSoft)
This is exactly what I use for several years (OpenLinux), I use it for years and it’s been several months since I build my version offers XBMC and OpenPLi. I’ll confirm that there is no support public for the S805.

I will send an email to a contact in Amlogic whether they will soon update their buildroot (Uboot, Kernel, AMLCustom) public.

Otherwise I’d have to order me a box S802 and I would resume later adaptation of my project on a S805, with hopefully the support of Amlogic.

@dhead666
Very interesting, I’ll come back to you if I have more item, I have to manage to recompile the Kernel to activate modules USB DVB and also operate the VPU H265 with gplay This to confirm correct operation of GStreamer (Sink) !

I’ve noticed that, for some reasons, there’s no real Linux community for Amlogic processors, like there is for Amlogic or Rockchip.

With the second Amlogic you meant Allwinner?
Would the Amlogic SDK help the Linux community growth?

@Gabe
Yes, I meant Allwinner…
Actually there’s a community, but mainly for XBMC, but not for desktop linux distributions like Ubuntu, Debian, ARM Arch Linux… I’m not sure if an Amlogic SDK would motivate people to create a community. Amlogic already releases source code, but as some mentioned it’s not complete.

It would be nice to have a license with the libamplayer sources, gpu kernel modules and the out of kernel tree modules, and of course distributing rights for libMali blob.

Also Amlogic libMali blobs were armel which is very silly (not sure about the recent), and I believe there’re some blobs within the libamplayer/amffmpeg.

Will you be able create a linux distro for S805 that accepts Em28XX USB tuners ?

No answer in sight, so I will direct me to the S802-H processor for decoding DTS! : http://forum.xda-developers.com/showthread.php?t=2764694 I think the S802-H is the best choice on an Amlogic ranges for use Linux. I checked the update Minix, and after checking in with HEX, I managed to extract the dts file (device tree source), and it looks exactly like this: https://github.com/Matricom/kernel_amlogic_meson-common/blob/kitkat/arch/arm/boot/dts/amlogic/meson8_k200b_2G.dtd Support linux is indeed confirmed, I hope it will be good! To be continued … @sam It’s not winning, I set aside my box S805 pending Amlogic, released a public update. @Jean-Luc Aufranc (CNXSoft) I recovered completely by chance… Read more »

How this device handles xbmc?
It works well ????

@Jean-Luc Aufranc (CNXSoft)
Ok.
I will wait for your review before buying one
Thanks

I received a response of Amlogic they will do what is necessary to bring me an answer in the coming days on the update buildroot integrating support the S805.

That’s why I love Amlogic !

Hi from Spain, a vendori lie me and send me this model when i bought a s8133, the i lost money if i resturn it to china, i need more power and memory but the most important it´s that my model not have bluetooth for more inri, please for me it´s very important, i try to use a three models of dongle thats run on my old mygica but it´s not detected on this, the option for activate bluetooth not it´s visible, one of adapter its a broadcom bcm92045b3, any one can help me? thanks for all

Hi, can you please help, I just got the MXQ S85in the post from China to Ireland. When I connect all the leads, and power it up nothing happens, just a solid blue light on the top of the box, and no signal from the HDMI Cable to the TV. I rang a local shop, and they said it sounds like a faulty boot loader. I emailed the place in China, have heard nothing back yet.
Kind regards.
Brian.

quick follow up to say that the serial port is the small one, closest to the memory chip (haven’t tested the large one).

you can interrupt the boot with “enter”, unfortunately the prompt is unresponsive and i was unable to execute any commands, i don’t know why.

you can still get the boot output.