There has been several Ubuntu images released for Rockchip RK3288 based devices, even dual boot Android / Ubuntu images, first thanks to Ian Morrison who published instructions to install Linux on RK3288 devices based on the work done by T-Firefly team, then Nagrace released a preliminary dual boot Android / Ubuntu for HPH NT-V6, Open Hour Chameleon can boot either Android or Lubuntu from an SD card, and more recently Ugoos released a dual boot Ubuntu 14.10 / Android 4.4 image for their Ugoos UT3 mini PC, as well as a demo video.

As a side note, I love mega.co.nz links as the download speed usually maxes out my Internet connection bandwidth.

There are two files and one folder in the dual boot rar file:

That means you’ll need a computer or virtual machine running Windows to install the firmware.

I understand the dual boot image boots to Android by default, and if you want to switch to Ubuntu, you need to press the power button, and the menu options “Switch System” will switch the device to Ubuntu. Once in Ubuntu, you can switch back to Android by clicking on the Android icon shown in the screenshot above. 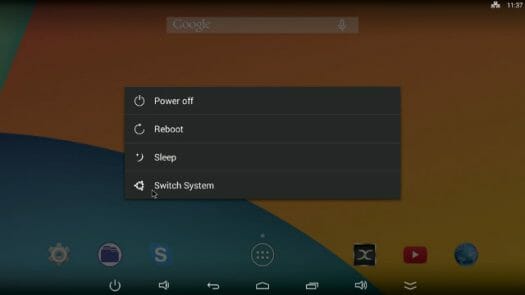 The Ubuntu distributions does not support 2D/3d graphics acceleration, not hardware video acceleration because the GPU / VPU drivers are not available for Linux, and nobody has done the work with libhybris to support Mali-T764 GPU, and whatever VPU is used in RK3288.

Nevertheless the system appears to run quite smoothly thanks to the quad core Cortex A17 (or A12?) processor, and the fast eMMC used in the board. 1080p video playback is possible using software decoding. In the video demo below, Ugoos demos their dual boot image, starting in Ubuntu by playing music, running LibreOffice, browsing the web with Mozilla Firefox, installing and running Gimp, playing two 720p videos fom a SAMBA share over Wi-Fi, laoding a board games, and it looks like a perfectly usable system. However, they did not try more challenging tasks like 1080p video playback, YouTube video playback, flash games, etc.. but it’s something I’ll probably try with Open Hour Chameleon. Finally, they show how to switch between Ubuntu and Android, and vice versa. It only takes 15 seconds to switch between Ubuntu and Android in the video, but I think that part must have been edited.

Very interesting to know about flash storage space, how much available in Android and Ubuntu.

VPU: rk3288 has still Hantro G1 or something really similar, with the addition of hevc which is a separate vpu or an expansion (Hantro G2 ???!? ).

GPU: Some mali drivers for midgaard/764 are surfacing, but with my CR12 I have still no mean to test them.

@max
I hope they share storage. The company may send me a unit with the dual boot firmware pre-loaded, so I may be able to answer soon.

@matt
Thanks for the info. The Hantro G2 would be nice as both HEVC and VP9 should be supported up to 4K60, but since VP9 is not advertized for RK3288, it must be something else.

@Jean-Luc Aufranc (CNXSoft)
@max
Now , in dual boot version in android 2GB, in Ubuntu 3GB (of which 1,5 Busy by system). And 2,5 GB Shared memory. It is true for 8Gb version of device. The image is actively improving and we are ready to listen users advices =)

SD Card Linux image released for UGOOS UM3, UT3, and UT3S: http://ugoos.net/blog/ugoos-ut3-um3-linux-boot-from-sd
So no need to flash the eMMC.