Vidon.me has sent me one of their Vidon Box (without asking). The box features an Allwinner A31s processor, 1GB RAM, 8GB storage, and more. You can check my previous post for Vidon Box specifications. The company is also providing a membership for extra services such as HDMI / SPDIF pass-through, and Blu-ray menu navigation, among others, as you can see from the table below. The item with ** are upcoming features.

The box includes one year subscription. Today I’ll simply post some pictures of the device and board, before writing a review in a couple of weeks.

The media player comes in the black box below with Vidon logo in golden, as well as a sticker with a summary of specs on the bottom. 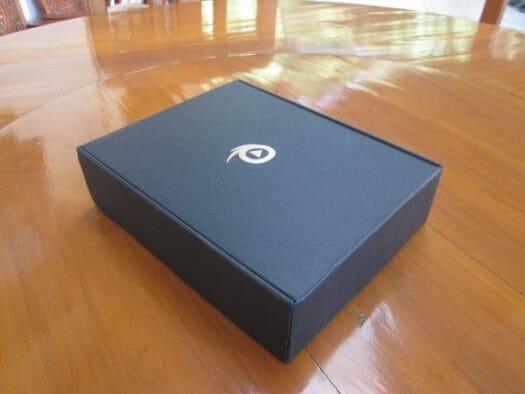 Vidon Box comes with an IR remote control including a CR2032 battery, a 5V/2A power supply, an instruction manual in English, and a VidOn Membership top up card to enable a free one-year membership. There’s no HDMI cable, so it’s something you’d have t purchase separately.

Most boxes come in rectangular or squared shape, a few with a hockey puck like shape that’s not my favorite, but Vidon Box features an elliptic aluminum case that looks pretty to me.

All ports are located on the rear panel: Wi-Fi antenna, a reset button, optical S/PDIF, two USB 2.0 host ports, HDMI output, 10/100M Ethernet, and the power jack. There’s no micro SD slot, so the only options for external storage are the two USB ports. The front panel is a semi-transparent black plastic hiding the power LED, and the IR receiver.

Provided you have the right tools, opening the box is straightforward, as you only need to untighten two screen on the left and right side of the rear panel, take out the rear panel, and slide the board. It took me a little while since my multi-bit screwdriver was too thick, and would not fit into the deep holes, so I had to run around to find another screwdriver.

There are many golden dots on the board, and normally these are test points, but since there are just too many, and based their position, they must have another purpose. They make the board look neat though. Allwinner A31s is a quad core Cortex A7 processor clocked at 1.0 GHz, which should explain why there’s no heatsink. Two Samsung K4B4G1646D-BCK0 DDR3 are used to get 1GB RAM, and a 8GB FORESEE NAND flash has been used for storage. The Wi-Fi module is based on Realtek RTL8188EUS. Other ICs include AXP221a PMIC, and IC Plus IP101A Fast Ethernet transceiver. The UART connector for debugging is soldered. You’ll also notice a solder pads for TF (micro SD card), but they probably left this out due to mechanical issues with the chosen enclosure.

More pretty golden dots are spread on the bottom of the board. The board is VBOX1-V1.30, and it was probably made specifically for Vidon.me. You’ll also notice the two golden bands on the left and right edges of the board. The picture below might explain why they’ve done these, although I’m not 100% sure of the exact reason for this design. 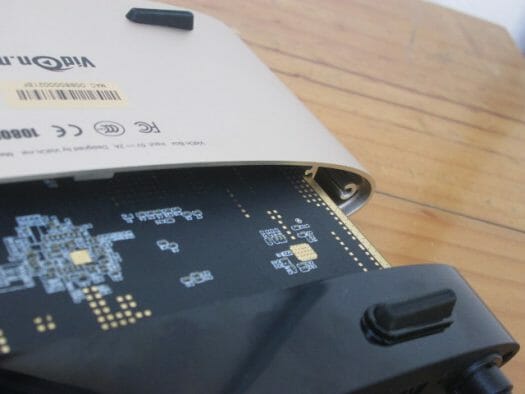 The MAC address shown on the bottom of the enclosure starts with 00:88:00, which does not lookup to any vendor.

Vidon Box can be purchased on Vidon.me for $69.99 including shipping and one year of membership. After one year, membership costs $15 yearly, and is only required if you need the subscriber features listed in the table on the top of this post. Other shopping options include GeekBuying and Aliexpress. Price remains the same wherever you buy.

This is the best one out there…

I thought this was the best one out there, so I bought one a month ago.

Turns out I had several freezes and force closes in XBMC 12 and the 13.2 beta they provide. I couldn’t play files over FTP (tested rmvb, avi and mkv) and some other problems. I hope they fix it, because I like the design and the new remote.

My conclusion right now: Very promising if they keep updating the software, but my Cubox-i2 will remain the main media player for now.

VidOn continue to violate GPL by not releasing code for their alpha and beta releases, with the excuse that they don’t know how the GPL works.

And now they are volating XBMC copyright too by calling their solution “XBMC Pro”.

They are simply using XBMC with a external player that have nothing to do with XBMC, and have no right calling their solution for “XBMC Pro”.

The dots in the PCB is a technic called ‘copper thieving’, which has the purpose of “… create a uniform distribution of copper across the surface [of the PCB]…”. Source: http://www.ee-training.dk/announcement/copper-thieving-confusion.htm

@JotaMG
I guess all 100+ people who ordered these will get a refund soon. I’m not even sure this price pays for Allwinner A80 SoC.

@Tired_
It’s optional, and you’d still be able to use your box normally once it’s expired. That is except If you use an AV receiver, and need HDMI pass-through… But maybe they’ve considered people with an AV receiver must have the cash to pay for $15 yearly subscription. I recently check the price for these, and the cheapest I could find is around $500, and some cost well over $1,500.

I’ve purchased a couple of such deals, you wake up two weeks later with an e-mail from aliexpress that they will refund you the money as it was a scam. Depending on which part of the world you are in you may loose money on the fluctuating fx rate. Just realized Tired_ said the same thing. 🙂

What I am wondering is why Aliexpress allows for that kind of scam… it is so evident, that they should have some way to filter this “merchants”.
Does this means that anyone can setup a store on Aliexpress and sell what they want without any control?
It could be even stolen merchandise?

AllWinner? Blaaah. Cedar need a lot of workarround to be able to support anything in HW decoding mode….

Once I bought ONDA A31s AllWinner based tablet and thanks Gog inwas able to return it after 3 weeks. Complete crap.