Half year ago, I reviewed Shenzhen Tomato M8 / TM8 Android TV Box. It was the first hardware I received based on Amlogic S802, and although I found overall performance and video playback in XBMC was very good, the firmware was not always stable, and Wi-Fi performance was poor. Shenzhen Tomato has now sent me another model based on Amlogic S802 called Rippl-TV (click for full specs), with an hardware very similar to M8 as we’ll see below, but a completely different firmware that relies on XBMC as the Android launcher. 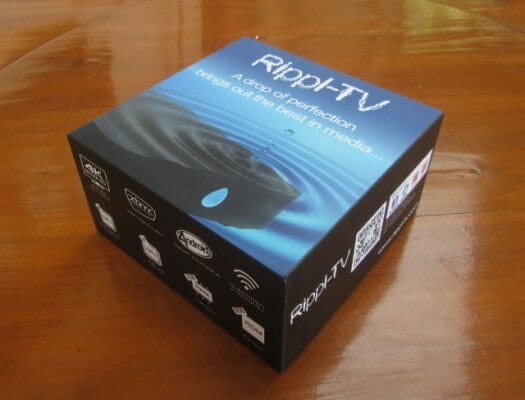 The package lists the key features of the TV with 4K UHD video playback, XBMC Rippl-TV Edition, Android 4.4 OS (called UtilOS), dual band Wi-Fi, a quad core Cortex A9 CPU coupled with an octa core Mali-450 GPU, 2GB RAM, and 8GB flash. There’s also a QR code linking to rippl-tv.com, but there’s nothing to download from the website, just some information about the box, and ODM/OEM services.

The device comes with an HDMI cable, a 5V/2A power adapter, an IR remote control, and a tiny and mostly useless user’s manual in English.

The top of the enclosure looks like ripples from a water drop, hence the name Rippl-TV. On the front panel, there’s a “drop” acting as a window for the IR receiver and blue power LED,  and one of the sides, an SD card slot can be found, while most connectors are located on the rear panel: 2x USB 2.0 host ports, an HDMI port, Ethernet RJ45 connector, 3.5 mm AV jack, optical S/PDIF,. and a power barrel. On the bottom of the enclosure, we can read “designed in Philadelphia, assembled in China”, which could give credence to rumours the device has been designed with the team that made Matricom G-Box Midnight MX2.

I’ve also shot a video for those who prefer a more visual unboxing.

Before getting the device, I assumed the hardware would be very similar to M8 / TM8 TV box, so let’s open it to find out. First remove four sticky rubber pads on the bottom of the case, and untighten four screws in order to open  the device.

There’s a metallic plate screwed on the enclosure’s bottom for cooling, and a largish heatsink on top of the CPU and RAM chips, and you’ll clearly notice a striking resemblance M8 TV box.  Four more screws need to be remove to completely take the board out of the case.

We’ll find AP6330 wireless module for dual band Wi-Fi and Bluetooth 4.0, and notice four pins for serial console on the top right of the picture.

I’d like to thanks Shenzhen Tomato for sending a sample, and if you buy in quantity, you can purchase from them. Individuals can purchase Rippl-TV for $139.90 on Amazon and Aliexpress plus shipping, which is over $40 more expensive than M8 TV box including shipping, so the firmware is better worth it, but it’s something we’ll find out in the full review.

there is many custom ROMs for s802 like devices on freaktab.com forum, stock ROM is usually outdated