Nvidia has done a great job porting Linux to their Tegra K1, and it’s one of the only ARM processor with a GPU supporting OpenGL, which helps a great deal with Unity for example. Nexus 9 supports Ubuntu (somewhat), and platforms like Jetson TK1 board are suitable to developers, but as I and others wondered why nobody ever made a Tegra K1 mini PC, I’ve been informed that such device existed already with PC Partner’s N258N1-F mini PC. 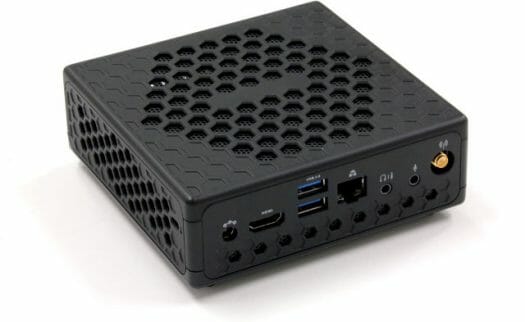 The system runs Linux for Tegra operating system based on Ubuntu 14.04 with Nvidia specific drivers. PC Partner computer is targeting the embedded market, and has been launched in December 2014. If you are interested, you can request a quote or more information on Ask Corp’s N258N1-F product page (Japanese).

Via Tech Report, and thanks to Peter for the tip.

Too bad that other manufacturers do not invest as much (eg Rockchip).

@CSylvain
I keep reading praise about K1 from developers, but for some reasons, there aren’t that many K1 products on the market, and no mini PCs that can be bought by individuals.

@ovidiu
It’s a TV chip. Interesting, but it’s probably not something most people will play around.
Bricking a $1,000 TV might not be such as fun experience…

Why no SATA?
And will it be cheaper than the Jetson TK1 board?

I sent an inquiry and got the following :))))

It looked pretty much like a “clone” of ZBOX CI321 nano and ZOTAC turned out to be under PC Partner Group as shown below:

They’re a local company here so I’ll ask them directly if N258N1-F were available in Hong Kong or otherwise:

Liliputing reports it may be sold as ZBOX N258N1-Q in the US.
http://liliputing.com/2015/01/pc-partner-launches-linux-mini-pc-tegra-k1.html