ECS LIVA was on of the first Bay Trail mini PC available on the market, and included both memory and storage. Elitegroup Computer System (ECS) has now officially announced an upgrade at CES 2015 with ECS LIVA X, another Bay Trail-M/I mini PC with up to 4GB, and 64GB storage. 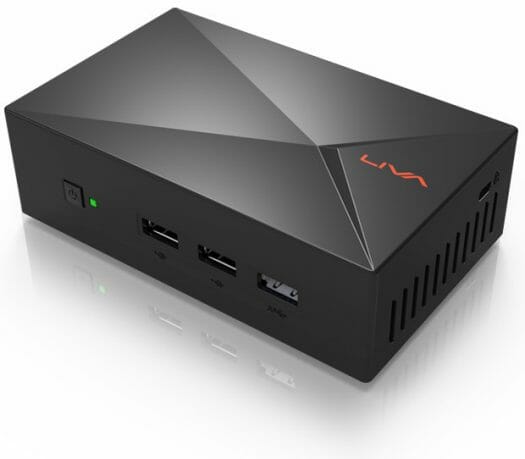 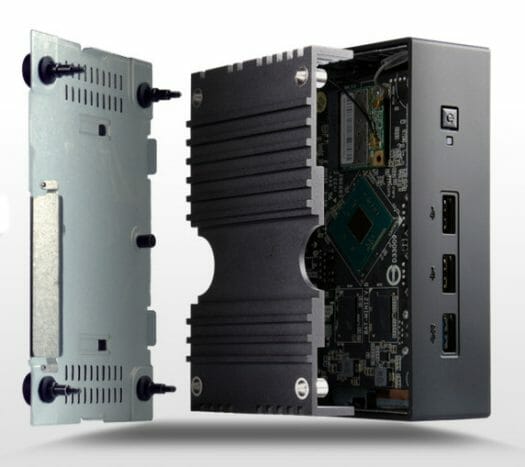 The new LIVA X is very similar to the old LIVA except with a different processor, more memory which is still soldered to the board, as is the eMMC, and one more USB 2.0 port. Dimensions have changed a bit too. The specs don’t list the exact processor, but after looking into the user’s manual, there are lots of reference to an Intel Celeron N2808 at 1.58 GHz (Burst 2.25 GHz), so that must be the one used in the product… The computer supports Windows 8/8.1 32 or 64-bit and Ubuntu from the eMMC, and Windows 7 from an mSATA SSD. A VESA mount is also available.

I could not find any pricing nor availabiliy information, but the original ECS Liva with 2GB RAM/64GB eMMC sells for $199.99 on Newegg, so the new version with 4G RAM/64GB storage, may sell around this price point, or a little higher.

P.S.: While I’m writing about Intel device, the company has announced new Broadwell processors (Core i3 to i7) at CES 2015 with a TDP between 15W and 28W. It still above mu unofficial 10W TDP for articles on CNX Software, but it’s still impressive to see the progress made by Intel when it comes to power consumption. They’ve also announced low power Cherry Trail Atom processors for tablets are now shipping to manufactures, but are waiting for product announcements before publishing more details about the SoC themselves.

Too bad that it seems that the Android ARM SoC mfgs did not listen about the need to support native Linux, now it starts to be too late to be able to stay on STB-sized mini PCs, now the x86 dinosaurs are entering that market, so as the history tends to repeat itself, soon the Intel and AMD will pretty much annihilate other players one by one. 🙁 Will Intel/RockChip keep the RK line going? Only they know. But the main body of ARM SoC mfgs will stay as stick producers, that are landfill in few years… Too bad they… Read more »

Nvidia is the only one that could actually play in all of the markets… Amazing how they managed to do that with their K1 and X1 lines.

@anon
The thing that I don’t understand is that we still can’t buy a Tegra K1 mini PC.
Maybe it’s hard for small Chinese manufacturers to work with Tegra (i.e. maybe Nvidia selects their partners carefully / based on volume), or/and it’s a cost issue.
Nvidia has a clear advantage over other ARM platforms because their GPU supports OpenGL.

@Jean-Luc Aufranc (CNXSoft) Yeah, I was expecting at least some of them jump for it, too bad it is likely the reasoning being about some sad geopolitical thing, as now after China has made it to become “self sufficient” on the tech mfg, that they might want only use components designed there, and not liking of using non-China based mfgs (like Nvidia that still is US-based)… 🙁 But at least Nvidia has luckily realized that they really need to do their own boards, and hopefully there will be X1 and future boards too, at reasonable prices (as K1 board with… Read more »

I was just wondering what will be the _real_ end game, PR of course is positive when it has money to talk about, but what will happen to the RockChip’s RK line, as generally in such “cooperation” situations one of the entities fail, and which one is more likely to get hurt, RockChip or Intel… History with Intel involved has pretty much always been negative to the other party (after the money honeymoon is gone).

Here is a Tegra K1 minipc:
http://techreport.com/news/27460/tegra-k1-soc-pops-up-in-pc-partner-mini-pc
I would like a model with 4 GByte RAM.
@Jean-Luc Aufranc (CNXSoft)

anon : Too bad that it seems that the Android ARM SoC mfgs did not listen about the need to support native Linux, now it starts to be too late to be able to stay on STB-sized mini PCs, now the x86 dinosaurs are entering that market, so as the history tends to repeat itself, soon the Intel and AMD will pretty much annihilate other players one by one. Will Intel/RockChip keep the RK line going? Only they know. But the main body of ARM SoC mfgs will stay as stick producers, that are landfill in few years… Too bad… Read more »

Anything less than 30watt is ok to mention imo

@Manny
This limit help me focus on the low power end of the market. Many other websites also feature laptops and computers with other AMD/Intel processors. So I cover MCU to CPU up to 10W, and related products, except for server chips, and maybe other speciality applications.

RockChip/Intel deal is a cover BRIBE securing Intel from prosecution by Chinese authorities. Intel is using monopolistic tactics in China, using dumping ($4 atoms) etc, this pribe makes them untouchable. Qualcomm wasnt so savvy and look at them now.

I agree that short sightedness of Chinese fabless companies (allwinter/rockchip/mediatek) will be the end of them, even the ones that joined Linaro simply dont get it and move to slow.

Too bad it seems to be designed badly (thermal issues, so it’s an designer thing, not just CPU arhitecture thing 😉 ), making it pretty useless piece of x86 dinosaur: http://www.legitreviews.com/ecs-liva-x-64gb-mini-pc-kit-review_157152

And the CompuLab fitlet-i might beat the Intel one too, especially the Radeon R3 on it should be pretty capable, compared to those crippled Bay Trail chips.

AMD is the underdog anyway, so always gets few bonus points for that. 😀