News about Texas Instruments Sitara AM437x processors first surfaced in 2012, before being officially announced last summer. Beside TI’s own development kits, I had not seen any hardware based on the company’s Cortex A9 industrial processor, but Variscite has now unveiled their VAR-SOM-AM43 systems-on-module (SoM) powered by AM4376 , AM4378, or AM4379 SoCs. 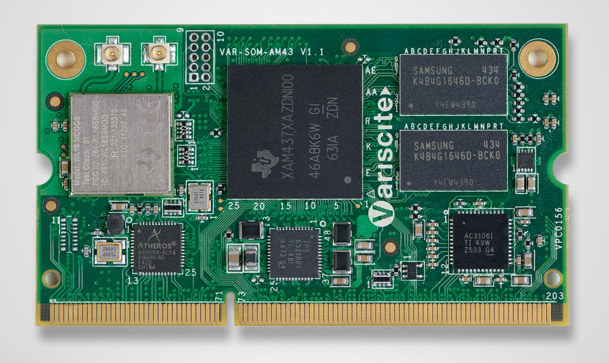 VAR-SOM-AM43 modules support Linux 3.14 and Yocto 1.6 (Daisy) with Qt 5, and Android 4.4 support is coming soon. Software documentation is available on the module’s Wiki, and support on Variscite’s forums. The company also provides mechanical and hardware documentation including a product brief, a datasheet, and mechanical design files (DXF) for the module, as well as schematics and a datasheet for VAR-AM43CustomBoard, the baseboard used for development and/or evaluation. TI AM437x TRM can also be downloaded directly from TI website.

The baseboard has the following key features:

A complete evaluation kit (VAR-DVK-AM43) is also available with VAR-SOM-AM43 SoM, VAR-AM43CustomBoard baseboard, a 7″ WVGA LCD with resistive/capacitive touch, a power supply, an Ethernet cable, an RS232 debug cable, boot/rescue SD cards, and a DVD with documentation and source code.

Variscite Sitara AM437x modules and development kits are available now, with pricing starting at $42 in 1K order. Further information, including hardware documentation, may be found on Variscite’s VAR-SOM-AM43, VAR-AM43CustomBoard, and VAR-DVK-AM43 product pages.