Freescale will soon announce i.MX6 SoloX dual core processor with ARM Cortex A9 and M4 cores, and dual-port gigabit Ethernet, but companies still design and manufacture new Freescale i.MX6 Solo/Dual/Quad based hardware for their mostly industrial customers. Variscite has recently launched a smaller version of their VAR-SOM-MX6 system-on-module called VAR-SOM-SOLO powerd by Freescale i.MX6 Solo processor with up to 1GB RAM, up to 512MB NAND flash for boot code, up to 64GB eMMC flash for storage, and TI WiLink8 module with Wi-Fi and Bluetooth Smart. 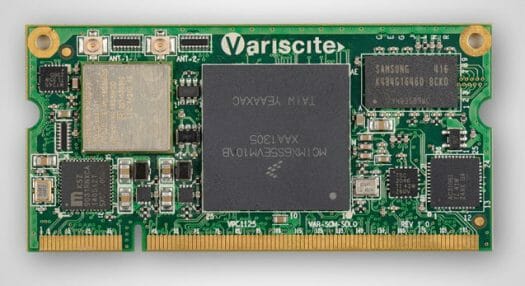 The module supports Android 4.4 with Linux 3.10, Yocto 1.5 (Dora), and Ubuntu 11.10, and the company also provide on-line hardware, mechanical, and software documentation including a Wiki for VAR-SOM-SOLO. Development can be performed on VAR-MX6CustomBoard carrier board that supports both VAR-SOM-MX6 v1 and v2, and VAR-SOM-SOLO.

VAR-SOM-SOLO module is available now for $42 and up, with price depending on options and volume. You may want to visit VAR-SOM-SOLO product page for more details.

@m][sko
I’ve read a Tegra K1 SoM was in the works a few months ago.. I’m not sure about the status.

Maybe Variscite can do a small SoM with the other Freescale i.MX6 processors.
Another solution would be to look into micro QSeven boards (70x40mm) with are just a little bigger than VAR-SOM-SOLO.
Seco has one, but no Wi-Fi/Bluetooth – http://www.seco.com/prods/other/uq7-i-mx6.html