When MeegoPad T01 was first unveiled, we were all promised an Intel PC in stick form factor that can dual boot Windows 8.1 and Android 4.4, but when the product and its competitors all ended up shipping with Windows 8.1 only. Since then people have managed to install Ubuntu (with caveats) and Android on Intel Atom Z3735F, but instructions may not be easy to follow for everybody. MINIX also launched NEO Z64A running Android 4.4, but so far, I had not seen any such devices actually shipping with a firmware that dual boots Windows 8.1 and Android 4.4. Aoluguya M1 TV Sticks claims to change that, as it ships with both operating systems. 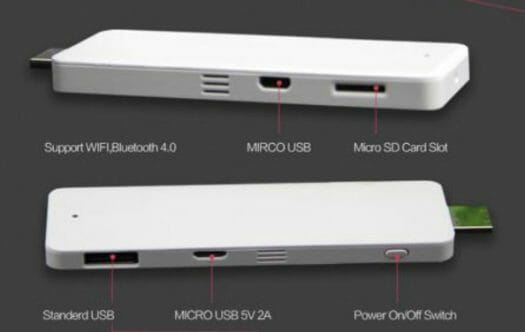 All features are exactly the same as MeegoPad T01, including dimensions and weight, and after looking at the ports placement, I can conclude that it should be the exact same hardware as MeegoPad T01. So the only difference should be that it comes with both Android 4.4 and Windows 8.1, and I’m not sure it can be trusted.

Aoluguya M1 sells on DealExtreme for $136.27, with lots of references and pictures about Windows and Android dual boot support. DealExtreme normally reimburses what you pay for return shipping (up less than 35% of the item value and less than $40) in case the product is not as described or defective. Aoluguya is apparently a new brand that sells mainly via DealExtreme, you can check out their website at aoluguyaelectronics.com.

Thanks to qwiqooq for the tip.

I have found dx.com to be far more reliable than those robbers at AliExpress! But yes it does look like the identical hardware.

Do you know how to reset the BIOS on these devices?
Sorry for out of topic.

Isn’t ConsoleOS also a dual windows/android solution that can be programmed on an hdmi stick?

@ben
Yes, but it’s not working yet on Intel TV sticks.