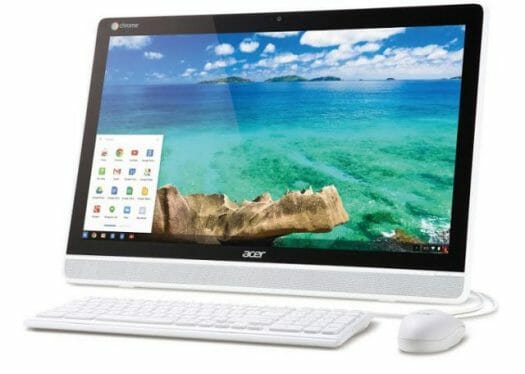 Acer all-in-one computer is apparently only the second Chromebase product, after LG Chromebase, and the first to include a touchscreen.

Acer Chromebase will  available in North America and Asia Pacific in Q2 2015 with pricing unknown so far.

Via Liliputing and Computer World

Yeah if this were the X1 I would have impressed but with the 32bit K1…. well not so much.

Sheesh, guys. The Tegra K1 is still a good chip!
I wonder how well this would run an ordinary Ubuntu desktop.

@Ian Tester
Yes and so is the RK3288 and it’s cheaper … I don’t want good or decent … 64 bit is here and it offers a significant performance advantage so I definitely want that …
The nVidia K1 is now more than a year old and this is isn’t even out yet so you’ll excuse me if I’m not at all impressed. Sure I’d be OK with a 1 year old Intel core based CPU but with these low power CPUs I do want the latest.