[Update on June 16 with comments from Inforce Computing:

Inforce IFC6410 board is one of the few low cost Qualcomm Snapdragon development boards / SBCs available on the market. Released in 2013, it features a Snapdragon 600 processor (APQ8064) coupled with 2GB RAM, 4GB eMMC, and various connectors. Inforce Computing has now introduced an upgraded version of the board, simply called Inforce 6410Plus, which adds GPS, one extra MIPI CSI interface, two MIPI DSI interfaces, and a few other changes, while keeping the same $143 price tag. 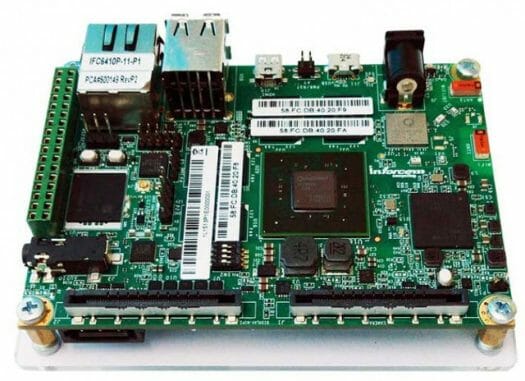 The company also claims to have improved heat dissipation, and implemented a fastboot switch for Android to enter into fastboot as recommended by Google. Android 4.4.2 and Ubuntu 14.04 board support packages (BSP) can be provided with the board. There’s no mention about Linaro support, although the older IFC6410 board gets images released monthly and published on the Download page. [Update from Inforce Computing: “The Ubuntu 14.04 BSP is in fact based on a Linaro Linux release, so we do support Linaro.”

You can find more details including software and hardware documentation on Inforce 6410Plus product page, with some links required credentials only available to customers. Inforce Computing will start taking orders on June 15.