Up to now, we’ve had mainly two development boards based on Rockchip RK3288 Cortex A17 processor: Firefly-RK3288 is a low cost development board powered by Rockchip RK3288 processor selling for as low as $140 shipped, and Radxa Rock 2, a more professional and expansive solution with dual Ethernet, 3G modem and so on. A third RK3288 board has now surfaced which offers a middle ground between Firefly and Radxa boards. PopMetal development board comes with 2GB RAM, 8GB eMMC, 5 video outputs / display interfaces namely HDMI, VGA, embedded DisplayPort (eDP), LVDS, and MIPI DSI, as well as the usual Gigabit Ethernet, Wi-Fi, and Bluetooth connectivity, complemented with GPS and NFC.

I’m not quite sure what the DTV connector is for, but I assume it could be MIPI DSI interface, with the other MIPI connector being reserved for the camera. 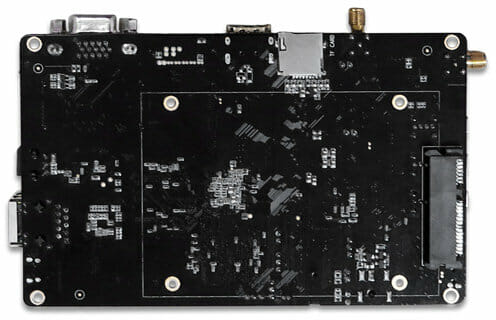 PopMetal is made by ChipSpark, the same company who designed and manufactures Rayeager PX2 board, and while there’s plenty of documentation the latter, nothing related to PopMetal has been published on the Wiki so far, but Android, Ubuntu, and Chrome OS operating systems will be supported.

You won’t find more much details on ChipSpark PopMetal product page, but the product is listed for $199 US. I could add it to the cart, but trying to sign-in with Facebook or Twitter failed. Shipping costs are not included, and they ship by FedEx.