Apart from the different processors, both mini-ITX motherboard mostly share the same specifications: 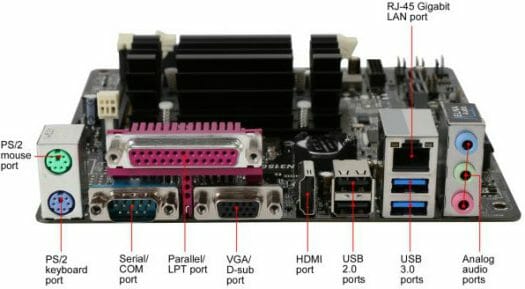 To get a complete system, you’ll also need memory, storage (HDD or SSD), a power supply unit (PSU), and an enclosure, but you should be able to get a complete system for $150 and up depending on your requirements. You could also buy Intel N3050 NUC on Amazon for about $145, but you’ll still need to add memory and storage.

ASRock explains the system supports Windows 10, 8 and 7 (64-bit), but Linux should be supported too, at least the Yocto Project has specific support for these low power Braswell processors, so hopeful that means a fully working kernnel (and drivers) will be available, but this needs to be tested/confirmed…

I could not find benchmarks comparing Celeron N3050 to the older Celeron N2807 (Bay Trail) yet. You may also want to visit ASRock’s N3050B-ITX and N3150B-ITX product pages.

@Gabe
Thanks! Extract from conclusion:

What we do know is that for general usage these new Braswell processors are slower than their Bay-Trail equivalents, at least 10% slower, which is very disappointing. While 3D performance has been greatly improved, Braswell is still rubbish for budget gaming.

Full ATX psu is kept this design could not fit in embedded solution.
19V laptop dc adapter jack would be great.

@iridiumsat
as Q1900DC-ITX ? write to ASRock your Xmas letter !!!
Otherwise use a 6-24V M2 Atx power supply board for an embedded solution (best solution) or the classic 12Vdc Pico-PSU.

I could use a board like that, but the graphics are pretty unimpressive and if it’s a step back in speed from the Bay-Trail processors… I can’t really get too excited over this one…

“these new Braswell processors are slower than their Bay-Trail equivalents”

A very good reason to wait until the Skylake equivalents arrive then, especially as initial findings appear favorable, at the top end at least.

The link got chopped off for some reason, trying again …

Ignore that broken link … this one …

@Jibril
Yep, as Q1900DC-ITX but in Brasswell 14nm platform and DC jack PSU.

I’m looking for this solution for adapting custom Linux kernel and file system in usb flash drive to get a rock-solid embedded platform.

Finally, only one graphical app running is Chromium no any desktop and building HTML5 on top.

you can allways use a pico-psu clone…

Mixed results running Linux on Intel NUC based on N3050:

Fedora 22 has some issues during installation
Ubuntu 15.04 appears to install and run OK

How can this board support 16 GB RAM if the CPU on it only supports 8 GB?

@herbikum at discard.email
Yes, that’s odd that Intel product page says 8GB maximum, but that’s the specs on Newegg, and other N3150 boards on Amazon, eBay and other shops are also listed as supporting up to 16GB RAM.

So either the mistake went through, and everybody is just copying and pasting the wrong information, or maybe it’s 8GB RAM max per memory channel, and N3150 has 2 memory channels.

Just install an Intel NUC with a N3050 in it as a media center. Works great. Hardware decoding of H264 and HECV/H265 at 4K/UHD resolutions!
Use MPC-HC as your media player.