Rockchip RK3368 started shipping last month, and thanks to GearBest, I’ve received my first 64-bit ARM TV Box with Beelink iONE i68. Today, I’ll take a few pictures of the device and the board, and will follow up with a full review in a few days.

The box was sent to me via DHL in a cartonboard package various information about the “Smart Android TV Box” such as Android 5.1 operating system, an eight core CPU with G6110 GPU, 4K2K and H.265 support, Wi-Fi and Bluetooth 4.0, and eMMC flash. 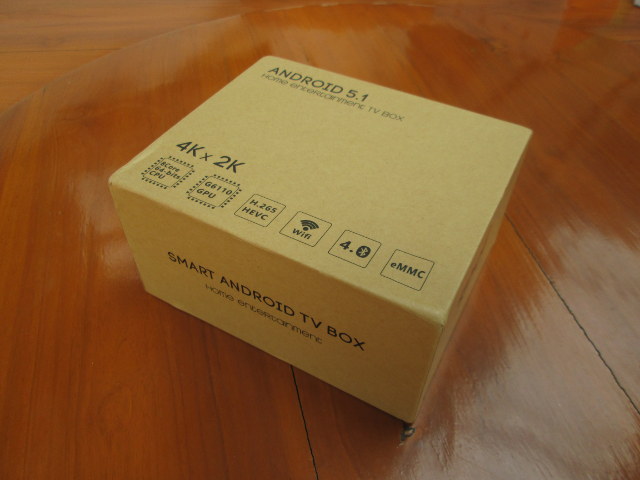 The package includes the box, a Quick Start Guide in English, and HDMI cable, an IR remote control that requires two AAA batteries, a USB OTG adapter, and a 5V/2A power adapter with US and EU plugs.

An SD card slot, two USB 2.0 host ports and a micro USB OTG port can be found on the side, with the rear panel comes with the following: a power button, the DC jack, another USB 2.0 host port, an HDMI 2.0 port, a Gigabit Ethernet port, and an optical S/PDIF audio output.

If you prefer watching the unboxing video, here it is…

Time to open the device. First remove the four sticky pads under the case, and untighten the four screws. The enclosure won’t come out yet, and I had to insert a sharp plastic object to pop the top cover out. 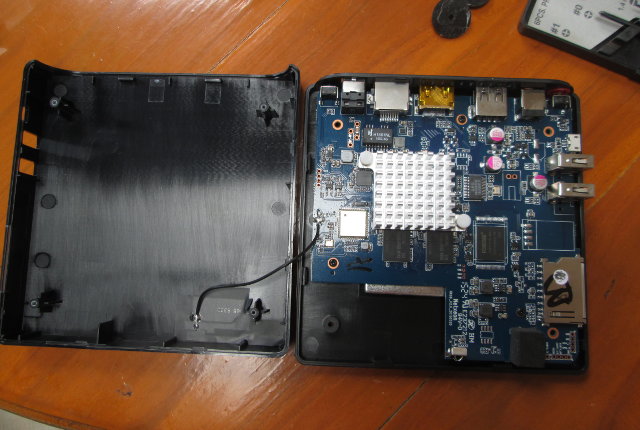 There’s just a heatsink for cooling the processor. I’ve removed the three screws that hold the board to the enclosure in order to take out the board, and removed the heatsink.

There’s not much to see on the back of the board, except a sticker confirming the specs with RK3368, AP6330 Wi-Fi module, 2GB RAM and 8GB flash. The cooling solution appears a little odd, as the thermal pad is placed half on a metallic plate and half on the ventilation holes, not sure how efficient that is…

Beelink i68 is available now, and you could consider purchasing it from GearBest for $78.99 with 2GB RAM as shown above, or $71.18 with 1GB RAM, but it can also be found on other retailers such as Amazon US, eBay,  GeekBuying, and Aliexpress among others.

Very interested in seeing what type of Linux support emerges for the 3368 eventually. Obviously that will take time, but 8 cores, 2gb RAM, and gigabit ethernet are not a bad starting point for an Ubuntu or other Linux machine.

Are you sure its gigabit internet as the one I received from gearbest is just standard speed? Also even though specs say sd card up to 64gb mine will only read up to 32gb. By the way kodi performs very well with this box on par with the NVidia shield android tv box

Dunno if Kodi 15 or newer boxes are the reason that Kodi has been running well in later android mini pc’s.

@Ben
Not sure yet. I just got it from the specs listed on GearBest.
Some RK3368 come with Fast Ethernet, while others use Fast Ethernet. Anyway, that’s something I’ll find out in the review.

@Jean-Luc Aufranc (CNXSoft)
I’m looking forward to see if you can get it play [email protected] video content. SPMC 15 Isengard pegs 100% CPU on VP9, showing that it’s using software decoding, and 20-30% CPU on Big Buck Bunny x264 4k (which implies hardware), but only gets 15fps.

@miniNodes.com
Kernel 4.3 will already contain basic support, where the rk3368 can boot from some sd-card/emmc or usb device into a rootfs. So far serial console only though.

@MMind – Thanks for that info! Great news, and I’m sure its only a matter of time until it is more robust.

@Ben
I can confirm It’s only Fast Ethernet now. It can deliver over 90 Mbps in full duplex (iperf), which is very good for a Fast Ethernet connection, but obviously not quite as fast as GbE.

Hi, has that mini PC wireless display function on display Android option menu aviable?
Can it mirror Its screen as trasmitter to a miracast dongle?

According to gearbest it should be gb internet. I’ve just ordered one, so I’m thrilled, what else isn’t what the site says?

@Claus Dittrich
Two models I have order from gearbest in the past 6 months had the wrong specs listed, A beelink pocket pc was supposed to have usb 3.0 and this model was to have gigabit internet and 64gb sd read capability.

@Ben I have never dealt with GearBest customer support, but with DX, I can normally get some refund, or more accurately a coupon for future, if one of the product I purchased does not match the specifications. For example, once I got $5 back when I ordered a fitness tracker, and the display was smaller than one the pictures, and it was not IP67, but IP65 as advertised. Some thing when the test leads of a multimeter did not work as expected. There’s always the option to return it if it is not as described. I don’t know how GearBest… Read more »

@Jean-Luc Aufranc (CNXSoft)
Gearbest delivered this to me in july with a european power supply in error, luckily I had one from my hph box to use to test and eventually bought a proper power supply after numerous promises to send me the correct power supply gearbest never did.