Yesterday, Rockchip had an event for their Atom x3-C3230RK SoCs (previously known as Sofia)  developed in collaboration with Intel, and upcoming Android 5.1 tablets and smartphones based on the new platform, as well as progress with their first 64-bit ARM SoC (RK3368) that is now integrated into Android TV boxes, albeit still in development. Padnews wrote a summary of the event, but in this post I’ll focus on Rockchip RK3368 hardware.

The device will run Android 5.0. 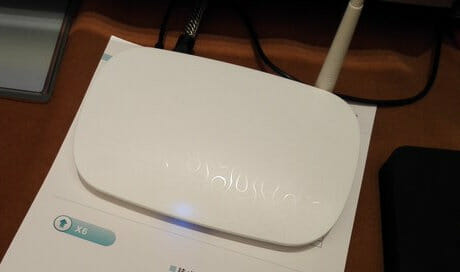 Traditionally, Rockchip has gone with Mali GPUs, except with RK3168, and now, RK3368 that features PowerVR G6110, the most powerful GPU of imagination’s entry-level PowerVR Series6XE family.

Don’t expect amazing performance, as RK3368 will not be quite as fast as RK3288, but it will be more cost effective. I’ve also been told X6 has been designed or the Chinese market only, and won’t be sold overseas, but that other RK3368 products are being developed for the rest of the world…

Is it only quad-core, not octa-core?

Gabe :
Is it only quad-core, not octa-core?

does is support TV tuners ??

@TC
but, I think Rockchip is a closed source :p

No its not anymore , used to be though

So its the next gen and 64bit but its not even as fast as the past gen and still doesnt support GB Ethernet or 802.11ac wifi? This has fail written all over it

Demetris :
No its not anymore , used to be though

It’s still closed source as they dont share anything for Android SDK and so on….

No information about a possible RK3388 ?

Demetris :
No its not anymore , used to be though

It’s still closed source as they dont share anything for Android SDK and so on….

A typo?
>and now, RK3288 that features PowerVR G6110
It should be 3368, right?
Also, why do you think 64 bit octa core A53 will be less fast than A17 quad core? You mean processor frequency rather than overall performance…?

Cortex A53 is the 64-bit successor of Cortex A7 core. (2.3 DMIPS/MHz vs 1.9 DMIPS/MHz)
So it’s a low power core. To get any performance improvement over current Cortex A15/A17 processor, we’ll need to see Cortex A57 or A72 processors.

Maybe I should write a post with a chart to explain this.

Eny Technology told me they made that box (maybe it’s one of their partners through).
One more picture: http://www.cnx-software.com/wp-content/uploads/2015/04/X6_TV_box.jpg

Be very careful of cheap products. They usually come with low quality RAM/EMMC, no heatsinks with no firmware updates afterwards and locked bootloaders. I think the RK3288 still has lots more firmware support and troubleshooting done and it will take several months before RK3368 is as stable, software wise.

Prima.king :
No information about a possible RK3388 ?

Confirmed by them just now

Here a picture of the ZERO Devices Z64, powered by RK3368:
http://www.zero-devices.com/images/ZERO_Devices_Z64_1.jpg