Punch Through launched a crowdfunding campaign back in 2013 for LightBlue Cortado an innovative Arduino compatible BLE board that can only be programmed wirelessly over Bluetooth Smart. The board has since then been renamed to LightBlue Bean, and the company allegedly delivered rewards to backers on time, a rarity in the crowdfunding world. LightBlue Bean+, the second version of the board, is larger with solderless headers, supports more Bluetooth LE capabilities such as MIDI, and includes a battery. The project launched on Kickstarter yesterday, and already raised over $40,000, surpassing the $30,000 funding target set by the team. 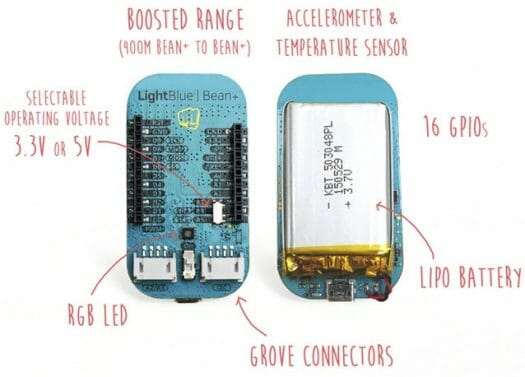 Please note that the smaller and cheaper Bean board will also be updated with the new BLE capabilities (MIDI, beacon…), so if your project requires a small module and/or is cost sensitive, you could still consider the first version of the board. Bean+ however should be easier to use for prototyping thanks to 2.54mm pitch headers and grove connectors.

The board is programmed with Sketches like another other Arduino compatible boards, but it can only be done wirelessly over Bluetooth LE. Supported operating systems include Mac OS X and Windows , [Nope: Their  schedule has no plan with Linux support]. Mobile devices supporting Bluetooth 4.0 can also be used for programming with Punch Through’s Bean Loader apps for Android and iOS.

If you want to develop your own app, software development kits for iOS/OS X and Android can be found on Punch Through github account. Finally, you can connect the board to the cloud, and program them visually using either Node-RED or OctoBlu interfaces.

Watch this entertaining video to find out some of the projects feasible with the board.

You’ll need to pledge $39 to get one Bean+ board, but you may also consider the popular $80 (early bird) / $84 “MEGA PACK” reward with two Bean+ boards and 5 Grove modules and corresponding cables. Delivery is scheduled for December 2015, and shipping costs $9 to $15 depending on your location.

Any idea if this (or any bt module) can be used for :

1) To transfer data from an Arudino (SPI) to a PC via bluetooth (1Mbps+)? Profile?
(I’ve used a spi to bluetooth module (serial-port-profile), but transfer rate is only 115.2kbps, I need much faster)

2) Sinking A2DP streaming data?
(Android bluetooth seems to only sink to headphones and not sd card)

@Jean-Luc Aufranc (CNXSoft)
Don’t think Linux is supported (yet). A separate Loader program for both OSX & Windows 8.1 is required and it communicates with the Bean/Bean+ over BLE, transferring code compiled using Arduino IDE. On the mobile side (iOS & Android), compilation is done over the cloud, then transferred to the device.

@sk
You are right. http://legacy.punchthrough.com/bean/development-schedule/
Linux is not in their plan. I’ve edited the post.