Soon after Google and various partners announced Rockchip RK3288-C based Chromebooks in March of this year, Asus teased us with a Chrome OS stick called Chromebit to sell for less than $100, and also based on Rockchip RK3288 processor. After a few months wait, the company has now launched Chromebit CS10 for just $85. 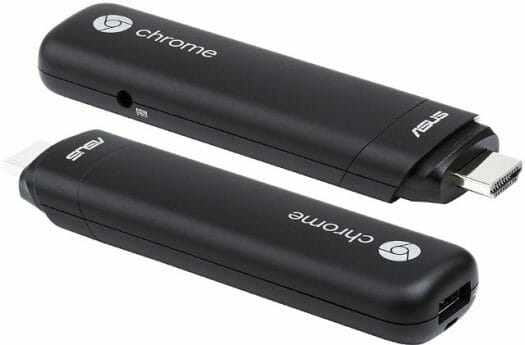 The Chrome OS stick is fanless, but the company warns to use it with “reasonable ambient airflow and temperatures under 35°C”, or “the Chromebit will shut down automatically to prevent overheating”.

It will ship ship with a power adapter, a short HDMI cable, four hook-and-loop stickers, as well as a quick start guide and a warranty card.

Chromebit will soon be available in the US, Australia, Canada, Denmark, Finland, Japan, New Zealand, Norway, Spain, Sweden, Taiwan and the UK. The company sent samples to several blogs that just posted reviews as the embargo was lifted. You can find some reviews on CNet, Android Central and PCMag, just to name a few.

Having an RK3288 in a box with a fan, heat was my first question about this device. No fan and being trapped in that tiny enclosure, would seem to limit the RK3288’s capability.
Nice post though, thanks.