After a few years of speculations and developments about i.MX7 and i.MX8 processors, Freescale announced Freescale i.MX7 family this summer. The new processors are based on one or two Cortex A7 cores coupled with a Cortex-M4 MCU for real-time tasks, and are a low power alternative to Freescale i.MX6 processors. But so far I had only seen a few announcements such Toradex i.MX7 SoM or Freescale 96Boards, without any product actually shipping, and Compulab claims to the first to market with a Freescale i.MX7 system-on-module, namely their CL-SOM-iMX7 SoM which will ship in quantities in early January 2016. 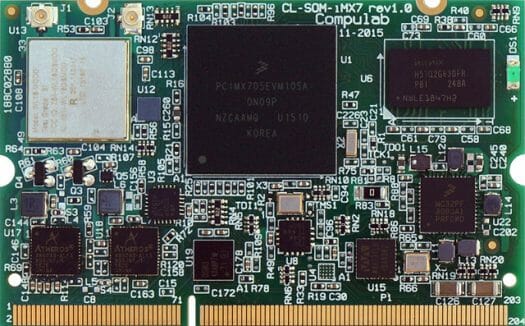 The module is said to support mainline Linux, Yocto Linux, and U-boot, with software and hardware documentation “coming soon”.

For development and evaluation purpose, or even inclusion in your own products, the company also introduced SBC-iMX7 single board computer comprised of SB-SOM-iMX7 carrier board and CL-SOM-iMX7 module targeting industrial and embedded applications.

SB-SOM-iMX7 baseboard brings out the following connectors and features:

Compulab CL-SOM-iMX7 sells for as low as $39 for 1k orders in its simplest configuration (SOM-iMX7-C800-D256-N128) with Freescale i.MX 7Solo, 256MB RAM, 128 MB NAND flash, no wired n0r wireless connectivity, etc…, while the carrier board goes for $81 in commercial temperature range, with $10 extra for extended, and $50 extra for industrial temperature range.

More details, including options details and pricing, can be found on Compulab’s CL-SOM-iMX7 and SBC-IMX7 product pages.

Very nice, I like the fact that the 3 i2s interfaces are accessible. AFAIK SolidRun’s i.MX6 MicroSoM don’t offer that (and I had to fraking look up each pin to figure this out).

Interesting looking board. I just wish these companies would be more supportive of the “I’d like to buy one or two of these to play with” purchasers.

Grumpy Old Coot :
Interesting looking board. I just wish these companies would be more supportive of the “I’d like to buy one or two of these to play with” purchasers.

it should be triple price if order only one or two, according to the website compulab.

We at Toradex offer all our products also in single quantities at reasonable prices. Furthermore, we have a free sample initiative if you have a project which could potentially make use of one of our products:
https://www.toradex.com/request-samples
The prices for our i.MX7 products aren’t set yet, but will be quite competitive for sure. We will give an update on availability, prices, and more details about the interfaces soon. We will also add it to our Pinout-Designer tool which lets you pick the interfaces you are interested and you can directly see if there are any conflicts:
http://developer.toradex.com/knowledge-base/pinout-designer

How about compatibility of these SOMs between different producers? Is it possible to use baseboard made by other company? And vice versa, if I buy both baseboard and the SOM will it be possible to replace the SOM in the future by some better specced SOM designed/produced by another company? Is there any common specification describing how these SOMs interface with the baseboard?

@olin
There are some system-on-module standards like Qseven, EDM, or COMExpress, but it seems most companies go with their own “standardized module”.

There are also some potential issues within one standard. I’ve been told a while ago that all Qseven modules may not compatible with each others. Compulab does not follow any specific standard, except mechanical with a SO-DIMM connector.

@olin
CompuLab uses a unified pin-out for all the recently introduced ARM SoMs (CM-T43 (TI AM437x), CL-SOM-AM57x, CL-SOM-iMX6UL and CL-SOM-iMX7). All standard signals and peripherals such as power, Ethernet, USB, PCIe, SATA, UARTs, display interfaces etc. are located on the same pins on all modules. CompuLab also provides a unified carrier-board reference design compatible with all its ARM modules.