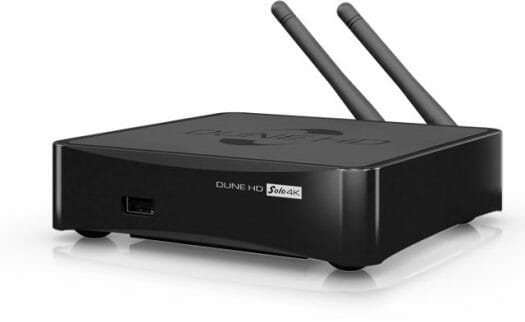 Supported file systems include FAT32, EXT-2/3/4, and NTFS, all with read and write support. The player also has some other media features that are often missing or poorly supported in cheaper devices with as Blu-ray playback and menus, true 24p output (23.976Hz), NAS function, MPEG-DASH and HLS streaming support, etc.. . Solo 4K can also be an home automation gateway thanks to Control4 software.

I’ve never used a product with Sigma Designs SMP8758 processor, but I reviewed Popcorn Hour VTEN with SMP8657, that’s basically the single core version of the processor, and video playback and HD audio pass-through all worked very well, yet with some bugs at the time of review.

Cloud Media also introduced Popcorn Hour A500-Pro media player with Sigma SMP8758 via a crowdfunding campaign where you could get it for $399 instead of $599 (MSRP) retail. Although both players as a different set of features, Dune HD Solo 4K should be a better deal once it becomes available in February of 2016 for 299 Euros (MSRP) [Update: price with VAT is 349 Euros]. You can find more details on the product page.

No Kodi / XBMC support like all Sigma Designs boxes which is really really bad for a media player company today.

Would not even consider one until Sigma Designs steps up and start supporting Kodi and the XBMC community.

There was an effort in the past between the Kodi and Sigma teams. VU even announced a satellite box with a new OS that would have Kodi integrated. Unfortunately both projects seemed to fizzle out and disappear. Dune have been building media players for many years, which have their own priorities, community and feature set which integrate with their own products and other systems. The Dune devices usually have a support life of years and their UI is built for their aims, not just as a Kodi clone. I expect Dune purchasers are less likely to be interested in the… Read more »

Everything’s been changed since Raspberry Pi was introduced. Leave all old hard disk media players behide with XBMC and then Kodi.

I am confused by this specification. “Video Output – HDMI 1.4b” I thought that UHD 4k TVs needed HDMI 2.0 or above in order to display 4k mode at an appropriate refresh rate. eg QUOTE HDMI 2.0 is an absolutely essential component of your TV if you want to enjoy content in true smooth motion as its intended to be viewed. This is because anything less than HDMI 2.0 will only offer you the ability to watch 4K movies and live events at refresh rates of just 24 to 30Hz, which simply isn’t good enough for decent viewing of fast… Read more »

@Alfred Braithewaite
It will only support 4K @ 30 fps, not 60 fps. But many movies (even 1080p ones) are shot at 24p.
So it all depends on the available content, and HDMI 2.0 would be preferable, but I don’t think Sigma Designs has an STB SoC that supports it yet. They do have HDMI 2.0 SoCs but for TVs only.

Not a good deal…end of story.
These products if they don’t start to compete in price/value for money they are doom to fail.
You can buy a no name china box that can do these and more(e.g. google market) for a fraction of the cost
And we should force them to get a 4k-ready vs 4K on all new boxes so they dont fool potential buyers

Updated price.. 299 Euros was without VAT, the actual price in Europe will be 349 Euros with VAT.