Three years ago, Canonical unveiled their plan to develop Ubuntu for Tablets with support for both tablet mode and full desktop convergence, but development took longer than expected, and in the meantimes some companies launched tablets without real mobile / desktop convergence, such as Cube i7-CM or Mastermind UT One, non of which were really successful. However, with the upcoming Ubuntu 16.04 “Xenial Xerus” LTS release, Canonical has worked it out, and the company cooperated with BQ to develop Aquaris M10 Ubuntu Edition tablet the feature both mobile and desktop modes. 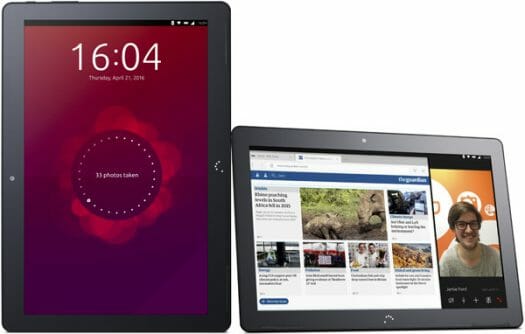 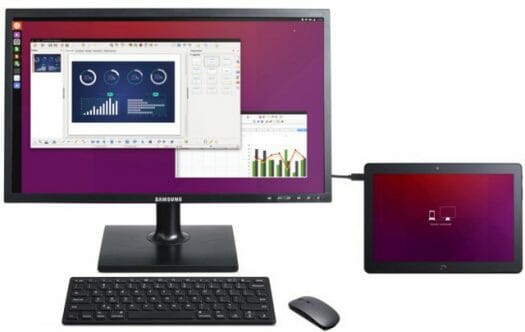 While you are on the go, the device will feature a mobile-based full touch interface, but if you connect a keyboard or/and mouse via Bluetooth or USB the same desktop mode as you use on your computer or laptop will automatically be enabled, and you can connect the tablet to a monitor or TV via the micro HDMI port for a full PC experience.

Canonical explains the Ubuntu will support “responsive applications developed for both touch and point/click input and which re-shape to whichever UI is being displayed”, and they will be accessible from a “ingle application store with a range of compatible third party services”. So I guess that means apps also need to be ported to fully support both mobile and desktop environments, and it’s not clear what’s the status of the ports so far. However, the company claims porting app is very easy:

Third party developers will be able to easily create new Ubuntu applications which only need to be developed once but which can be available and used across all Ubuntu interfaces.  The Ubuntu SDK provides the fundamental tools developers need to make their apps easy to adapt and run on any display. When you see your application on the phone and then use that application on the desktop, it is the exact same code running each application. Ubuntu does not need to know if the app is coded for a mobile or desktop display rather it is the application that surfaces the appropriate interface depending on which display is required.

BQ Aquaris M10 Ubuntu Edition will start selling on Q2 2016, likely after the official release of Ubuntu 16.04 scheduled for the end of April. The price is unknown, but for reference BQ Aquaris M10 Full HD tablet, running Android 5.1, is currently selling for 259.90 Euros on BQ’s website.

Many of those specs mildly impressive except the cpu. This seem more like a test the waters than convergence. I was hoping for the same cpu as the Meizu Pro 5 that they are working on creating an Ubuntu edition for. That Exynos 7420 is a 14nm A57/A53 Mali Octocore monster of a cpu/gpu, but if this is $200 or below I will probably buy it.

Another hands-on video @ MWC 2016 – https://www.youtube.com/watch?time_continue=123&v=GKd3CElsq-w
It helps if you can speak Spanish.