Canonical and Lime Micro have jointly announced SoDeRa low-cost software defined radio (SDR) which can be programmed to support any type of wireless standard including UMTS, LTE, LoRa, Bluetooth, Zigbee, RFID, Digital Broadcasting, and more, and aiming at helping operators reducing costs & complexity, while speeding up time to market and providing greater flexibility. 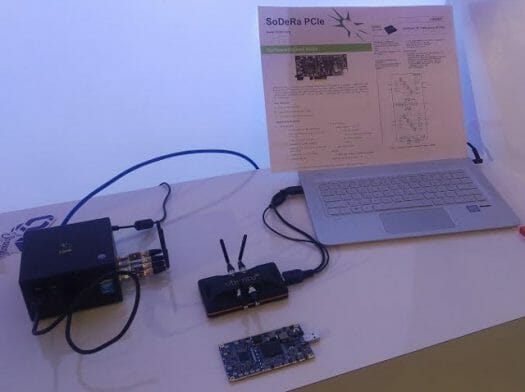 The kit will include a board with the following specifications:

Canonical (Ubuntu) will provide a framework for open source developers to develop apps supporting current and next generation wireless standards including 2G to 4G radio, TV broadcast, satellite communication, RFID, Bluetooth, WiFi, ZigBee, zwave, lorawan, ibeacon and radar. The Telecom operators will then have the flexibility to add additional standards to the base station or IoT gateway by simply uploading apps, removing the (over) reliance on Telecom hardware vendors.

SoDeRa is currently showcased at Mobile World Congress 2016 in Canonical and Lime Micro booth, and SoDeRa will soon be launched on Indiegogo. Interested telecom operators, or anybody who wants to received updated, are invited register their interest on SoDeRa.org website.

Nice, this is a good change to get something really nice that would work with either Laura or Halo or whatever you need out of these many new protocols.

Awesome! Hope that they add Z-Wave support out of the box.

Question how they will legally handle propriatary encryptions?

Z-Wave is highly unlikely to be supported considering it’s a proprietary protocol owned by Sigma Designs. I really can’t see this happening, regardless what Canonical is saying.

@Jean-Luc Aufranc (CNXSoft)
I’m sure it’s great for prototyping, but considering that you can get MCU’s with built in 2.4GHz radio’s for ~$1 if you know the right companies, this is very expensive.

Also, how useful will the code be that you’d develop using this, if you move to another hardware platform?

It might be a nice incentive for the educational market, but I see little use of it elsewhere.

@TLS
Little use? Imagine continiously only having to upgrade software instead of hardware to migrate to the next and next-next-generation of Home Automation protocols, WiFi standard, and 4G to 5G gateways.

The implications of this is huge! Question remain how to solve software patent issues, how to pay for software to upgrading to next-generation protocol if it is propriatary.