Allwinner H3 processor has become popular on hobbyist boards thanks to several Orange Pi board, especially Orange Pi PC and Orange Pi One due to their ultra-low prices, respectively $15 and $10. Olimex is also involved with their H3-OLinuXino-NANO board, and now at least one more company is about to release another Allwinner H3 board with SinoVoip’s Banana BPI-M2+. 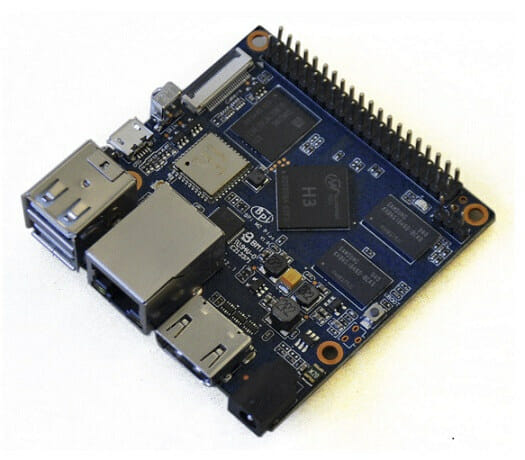 SinoVoip explains that 8G eMMC and on board Wifi module may be removed for cost cutting purpose in their board announcement.

The company claims the board will support Android 4.4.2, Ubuntu, Debian, and “Raspberry Pi” image (meaning Raspbian + Allwinner H3 kernel/bootloader), and the firmware should eventually be downloadable on banana-pi.org, but there’s nothing for M2+ for now. Some limited information is also available in the Wiki. SinoVoip also like to claim their boards are open source hardware, but they usually only release the schematics in PDF format and nothing else… You can get support via the forums that are mostly inactive, except for Banana Pi BPI-M2 and Banana Pi BPI-M3 boards, and some posts such as “Garbage M2 distros” are not really re-assuring, but at least they did not remove the critical post. It seems for anything Allwinner H3 related, you may consider the community developed armbian instead of the manufacturer’s firmware images.

I could not find when the board will be launched, nor its price, but when it does launch, it should be listed on SinoVoip’s Aliexpress store.

The nice detail is that you get GBit Ethernet with this board without an ultra slow USB-to-SATA adapter like on Orange Pi Plus or Banana Pi M3. And maybe this will be the 1st Banana with good (3rd party) software support from the beginning: http://forum.armbian.com/index.php/topic/724-quick-review-of-orange-pi-one/?p=5608

But unless price, the type of voltage regulator (if any) and camera is known it’s a bit too early…

I think Sinovoip have a nice ov5640 with autofocus but with 40 pin FPC cable, does not fit the connector.
The other camera module they showed was ov8865 for the M3 and that seems to fit this board nicely.

Also they never had really good prices for the M2/M3 boards, unless now they come up with a $ 10.00 range.

@@lex
Let’s wait and see. I bet only the ‘cost down’ version would sell since why choosing BPi M2+ if OPi PC is available? If it’s OV8865 then most probably no Linux driver ever? BTW: want to join the party in Armbian forum? We could need your help getting the GC2035 working. 🙂

Cool, another H3 🙂 In January I read about Orange Pi One at your blog and I ordered one. It arrived exactly for one month which is OK regarding its dirt cheap price 🙂 Most probably I will also buy H3-OLinuXino-NANO because it will be open source hardware.

I think there is a GC2035 kernel driver in the Fireprime source.

I watch Armbian very closely, you and Armbian team are doing a great job. Sure i will join as soon as i can be of help and time permits.
It is nice to see new H3 boards coming and that it will receive support from Armbian and sunxi community.
Let’s wait for a good price tag or it won’t get much attention.

you just can use OV5640 module on BPI-M2+ , so it not need camera module board ,just remove camera form camera moudle , can use on BPI-M2+

Thanks for clarifying it.
Can you disclose the price for this specific device shown here (8GB emmc and Wifi/BT) and what we could expect for the version without it?

@lionwang
On the picture above a barrel connector for DC-IN can be seen. On the pictures you showed before Micro USB was used to power the board. With the Banana Pi M3 it was the other way around (first you used the barrel plug on samples to switch to Micro USB with the first production batches).

Which power connector will be used? A sane one or insufficient Micro USB? Do you really want that M2+ boards will be returned by customers as it happens now with the M3 all the time: http://forum.banana-pi.org/t/update-rasbian-and-debian-failed/1242

@lionwang
Thx for the clarifications and especially the decision regarding DC-IN. Highly appreciated! Then I’m really looking forward to the cost down version if the price remains competitive. Armbian support should already be done if we can rely on your published fex file.

@lionwang I have a couple of thoughts from a user perspective, developer perspective and potential buyer perspective that you might consider when you set the M2+ price tag, and i believe most people here would agree with it: * User Perspective $30 would position M2+ between ODROID-C1+ and NanoPi M2 and very close to Raspi 3, H3 is not for newcomers but this could change soon, thanks to armbian that possibly will support it. So i would carefully lower it to $25 and get all the potential newcomers. * Developer Perspective All the hard work has been done by the… Read more »

@@lex
Armbian 5.06 booting on Banana Pi M2+ http://sprunge.us/hERA (Nico from Bananian was so kind to try the Armbian image I created yesterday)

@@lex
BTW: Xunlong announced an Orange Pi PC Plus (the names get even more funny) with WiFi chip and 8GB eMMC for $20 or $21. If the OPi PC+ also gets GbE then why should anyone buy an BPi M2+ for $9 more?

Maybe you or @cnx-software could do a comparison of the two boards running the same armbian when you get them?
So now @lionwang has good reasons to drop the price, let’s see how this will end up.

@@lex No need for a test since it’s already known what to expect. GbE on BPi M2+ outperforms Fast Ethernet on OPi PC and if you need many USB ports then OPi PC is the better choice. M2+ will be slower by default (if you know what you do, you can let it run at 1296MHz after extensive testing — but this is not recommended) and will consume more since the SoC is fed with a fixed voltage. Regarding real world scenarios the clockspeed difference between 1.2GHz and 1.29GHz is negligible. Other settings (throttling strategy for example) not so much.… Read more »

@@lex thank you , i see all user care about this cost. i have found sinovoip 13 years. and i have do product more than 16 year. when i begin to do a product, i must do a good quality hardware . i have myself factory ,and have do more than 13 years supply chain management. i do not want to do a cheap copy with bad quality. i want you can use banana pi as a real product , many user use it do theyself product. if you come china and visit my factory , you maybe comprehend us.… Read more »

Since SinoVoip chose to stay as compatible as possible to Orange Pi Plus/PC I could simply use the GbE pin mappings from Orange Pi Plus. In fact this is an image made for Orange Pi Plus and the only things that need adjustments are USB definition and different throttling settings. By choosing only one fixed voltage for the H3 SoC the BPi M2+ overheats way earlier than the Orange Pis and will therefore be slower unless active cooling will be used.

Unfortunately due to the fixed 1.3V voltage the SoC is being fed with BPi M2+ is a overheating/throttling candidate: http://openbenchmarking.org/result/1604074-GA-1604071GA80 — we added an ugly corekeeper hack in Armbian to bring back CPU cores that were killed due to overheating especially for M2+ (might be necessary/useful for other H3 boards that use fixed VDD_CPUX voltage too, eg. FriendlyARM’s Nano Pi M1). In the meantime I hacked together a device tree file for mainline kernel based on Orange Pi Plus/PC .dts (thx SinoVoip for copying nearly everything identical 🙂 ), the mainline patches to get GBit Ethernet for OPi Plus running… Read more »

Unfortunately SinoVoip again tries very hard to ignore any bug fixes or improvements which will lead to the BPi M2+ being the slowest H3 board ever. Their THS settings limit the CPU clockspeed to 1008 MHz (compare with the 1.2GHz they advertise with) and to killed CPU cores instead of lowering the CPU clockspeed. So chances are great that you end up with H3 running just at 1008 MHz and only one active CPU core after running heavy stuff on the board. See the last 3 rows in this benchmark comparison. While Armbian already takes special precautions for the M2+… Read more »

@@lex While SinoVoip is still ignoring the M2+’s performance issues (using their settings H3 only running at 1008MHz maximum and killing CPU cores instead of implementing sane throttling) Xunlong announced the OPi Plus 2E for $35 in the meantime: H3 combined with SY8106A as usual (less throttling –> more performance), 2 GB DRAM, 16 GB eMMC, 3 available USB2.0 host ports like on OPi PC (fortunately no USB hub used and no USB port wasted for an USB-to-SATA bridge, that means you can benefit from 3 USB host ports that do not have to share bandwidth!) and some onboard WiFi… Read more »

Banana Pi M2+ DRAM reliability problem (fails already at 624MHz DRAM clockspeed so we might have to decrease clockspeed down to 576MHz instead of the advertised/used 672MHz by the vendor): https://github.com/BPI-SINOVOIP/BPI-M2P-bsp/issues/3