There are few ARM Cortex-A72 “class” mini PCs available on the market, and the only one I can think of is Amazon Fire TV 2015, powered by Mediatek MT8173 hexa-core processor, and priced decently at $99.99, but hard or expensive to source if you don’t live in the US. There will soon be one more choice, as Xiaomi has upgraded its Mi Box 3 to use Mediatek MT8693 processor with two Cortex-A72 cores, and four Cortex-A53 cores combined with PowerVR GX6250 GPU. 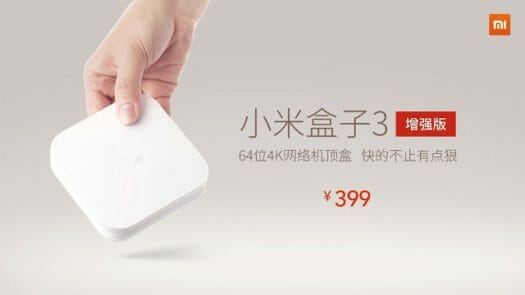 The device will run Android 5.1 operating system with Xiaomi customizations. There’s very little information about MT8693 processor, and the new Mi Box 3 TV box appears to be the first to use it, and since while Cortex-A72 core powerful they also emit a lot of heat, so a large heatsink and a fan are used inside the device. 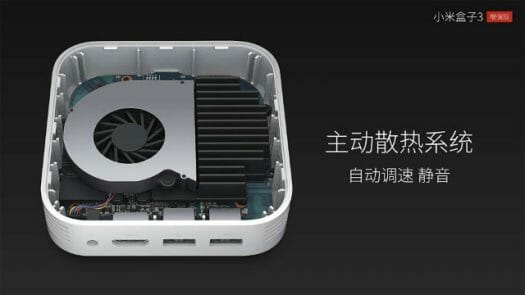 Xiaomi Mi Box 3 Enhanced Edition will start selling for  399 CNY (about $61) on March 18 in China. Online e-retailer will likely sell it shortly after the launch, probably between $80 to $90 including shipping, but it will likely require some hacking for people outside of China at least to change the language, just like for their previous models.  [Update: GeekBuying has just listed Xiaomi Mi Box 3 Pro for $85.99, with shipping scheduled for March 18] [Update 2: GearBest has it for $84.42, currently marked as out of stock, and they call it Xiaomi 3s Mi TV box]

Quite cheap and powerful box Cortex A72 but hard to use

@hoangdinh86
We’ll have to see if we can switch to other languages, change the launcher, and install Kodi. I’m not sure the latter support Mediatek processors very well however.

It’s so tempting to grab one of there to mess around with but the fact of the matter is that those chips will be available in other, FAR easier to play with device in the time it takes you to get such a device. IF Xiaomi was capable of shipping any hardware in any meaningful amount this would be different, but it still remains difficult to source their tuff regarldless.

It’s interesting to see MT8693 match the RK3399 by using 2 x Cortex A72 with 4 x A53 cores to achieve a good power/efficiency compromise. It begs the question: when AMlogic finally get into production with an S912 product, can they possibly succeed if it only has 4 (or 8) Cortex A53 cores? I doubt it. In fact I’ll be surprised if S912 does not include Cortex A72 cores and I’ll be amazed if it does not include USB 3.

Could be a great deal but to many unanswered questions. The GX6250 is listed on Vulkan wikipedia page but will Xiaomi upgrade to add it or does it already? Can you get Remix OS or Linux to run on it? Still this could be a good deal even if it is just able to run Kodi with full 10bit Hevc and Dolby or DTS audio. Does it have CEC support?

Anybody think that we can get source codes for this box from Xiaomi ? 🙂

@m][sko
Xiaomi – albeit being a big vendor who publishes /some/ kernel source-codes when they are in a good mood – is not very serious (like most chinese vendors) regarding source-code publishing… I have a redmi 3, and there is still no way to get any sources (despite I would have a very good reason to ask for them : this phone is vulnerable to the Stagefright vulnerability !)

please help !
how to change the language to english?

@albert
look at this http://www.cnx-software.com/2016/04/12/how-to-change-language-to-english-and-install-apps-remotely-on-xiaomi-mi-box-3-enhanced/

It works great, the hardware is a beast! The only important issue I encountered so far is that sometimes it exits the video player, some other times just pauses the playback on Netflix, every 10 minutes or so. On You Tube it exits fullscreen mode, which can be quite annoying. The only solution I could find is this: – In Settings (not the Chinese app, but the one that comes inside Shafa Market, or even better, go to https://drive.google.com/folderview?id=0B16bkj0QSkYnfjc1YXQ1YU1sSGVGOHZqY3FjWUNabUVJd1dSTFpSb1BZbnU4cVZQMi1hMUk&usp=sharing and download the startSettings.apk, then install it on your Mi Box, this way you´ll no longer need Shafa Market), go to… Read more »