There’s a lot of buzz around IoT, and the industrial sector is also trying to build smarter factories using protocols or standards part of Industry 4.0 or Industrial IoT (IIoT) depending on the country or group you belong too. Avnet has just launched MicroZed Industry 4.0 Ethernet Kit (I4EK) based on Xilinx Zynq-7000 ARM & FPGA SoC to address this market with support for the most common industrial protocols such as EtherCAT, Powerlink, PROFINET RT/IRT, EtherNet/IP, and Modbus-TCP. 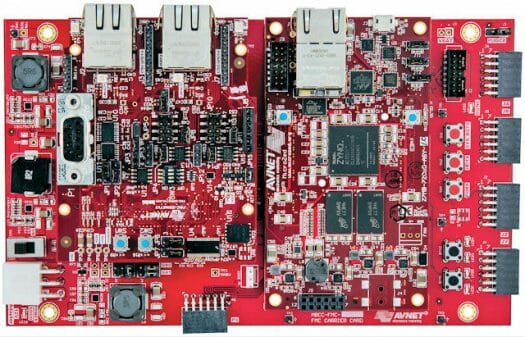 The “brain” of the development board is MicroZed module powered by Zilinx Zynq-7020 dual core Cortex A9 processor with FPGA fabric, and coupled with 1GB RAM, 128 MB SQPI flash, a Gigabit Ethernet port, and various I/Os. The module is connected to MicroZed FMC Carrier board with the following features:

The kits is pre-loaded with  EtherCAT reference design by HMS Industrial Networks, and can be controlled/managed with Beckhoff TwinCAT software. The Cortex A9 cores in the Zynq processor runs Xilinkx PetaLinux and an evaluation copy of HMS Anybus IP that implements PROFINET, Ethernet, Modbus TCP, EtherCAT, and POWERLINK on the FPGA fabric is included for free for evaluation or development. Deployed products will be licensed with a tiny 1-wire security chip, and only one  protocol is available at any given time to due Block RAM capacity of the Zynq-7020’s FPGA.

MicroZed Industry 4.0 Ethernet Kit is sold on Avnet for $699 an up. A few more details are provided on Microzed I4EK product page.