FriendlyARM has been very busy since the beginning of the year, as they’ve already released NanoPi 2 Fire, NanoPC-T2, and NanoPi-M2 boards, all based on Samsung S5P4418 processor so far in 2016. But they’ve not stopped, as the company has now launched NanoPi M1 board powered by Allwinner H3 processor with a similar form factor as NanoPi-M2, similar features as Orange Pi One, except they added two extra USB ports, an AV port with composite video and stereo audio, an on-board microphone, and an IR receiver. 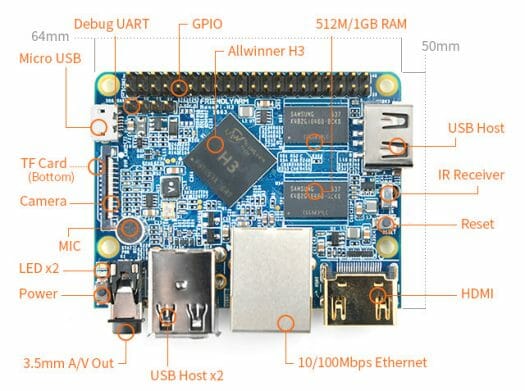 NanoPi-M2 board specifications (highlights show improvements or differences over Orange Pi One):

The board currently supports Ubuntu Mate, Ubuntu Core or Debian. Some documentation is already available on the wiki, but the link to the firmware are wrongly pointing to NanoPi2 images for now, which are not usable with NanoPi M1. It’s quite likely it will be supported by armbian too. The schematics (PDF) and mechanical (DXF) file are also up for download. 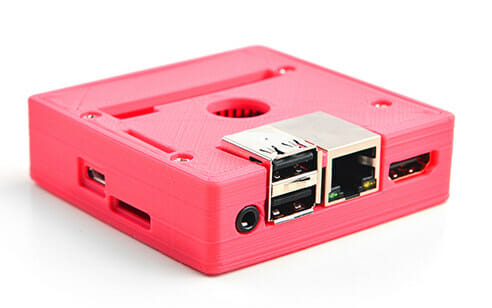 The company can also provide a case for $3.49, or you can print it yourself if you prefer.

NanoPi-M1 is only one dollar more than Orange Pi One, but adds more features and offers better documentation. Is there a catch? Of course there is, as while the board is listed for $11 on FriendlyARM, shipping adds at least $10, bringing the total to $21. It’s still a pretty decent price, but not quite the bargain you may have hoped for. [Update: The board is sold on DX.com for $22.46 shipped]

Shipping is not so bad.

Indeed for a single board it is $10 but I just check how much it will be for 10 boards to Europe and $31 total seems fair enough.

Any price for the 1GB RAM version?

I fail to see a power barrel but the wiki is quite clear that the board can be powered (more reliably 🙂 ) through GPIO pins 2/4 and 6 like Orange Pi PC/One. So the only interesting question is how the voltage regulator behaves. According to schematic it should work like on Orange Pi One switching between one lower voltage and 1.32V.

Sources and images become avalaible: https://github.com/friendlyarm/h3_lichee (still empty at the moment) and http://pan.baidu.com/s/1c0Lo3vE

According to script.bin used they do not adjust VDD_CPUX voltage just like with Banana Pi M2+ (sad since the SoC will suffer from overheating way more easily compared to the Oranges) but apart from that it’s a pretty close clone of Orange Pi One/PC. BTW: fully supported by Armbian since 5 minutes ago: https://github.com/igorpecovnik/lib/pull/241

Did they ship this with Google Play pre-installed?

@tkaiser
Armbian still with the old 3.4 kernel? I have heard there were some changes regarding ethernet support in mainline, don’t know if it is usable.

@Jon Smirl
Currently there’s no Android image available. But you can take the Android image for Orange Pi PC (works out of the box except blue led and ARISC errors since they copied the hardware very closely) or any other you find for H3 (Zidoo X1 or Beelink X2 for example), take FriendlyArm’s or better Armbian’s sysconfig.fex settings (see above) and then follow this guide to overwrite a few sectors with 2 files: https://codearetoy.wordpress.com/2016/01/12/orangepi-pc-android-display-on-dvi-monitor/

@zoobab
Mainline Ethernet still not ready but montjoie pushed his latest changes just a few minutes ago to his new Github repo. As soon as Ethernet is in a reasonable state we will provide 4.5 OS images too. If you use the Armbian build system you can run mainline kernel on H3 since last Dec already (using USB-Ethernet of course)

Shouldn’t that making a device with a great price/performance ratio for Kodi if you just want AVC and HEVC with 1080p @ 50/60 Hz?

Kodi on Openelec works fine for me on a Raspi 1 B for me, which also only has 512 MB RAM.

Kodi is available for Debian Jessie on armhf and from the Wiki it seems they have working graphic drivers — if mplayer works, why should Kodi not?

Do I miss something?

@Christian
Look into the OpenELEC forum on orangepi.org — the NanoPi M1 is more or less an exact clone of Orange Pi PC with half the DRAM (and that’s the problem — 512 MB seems sometimes not enough).

@tkaiser,
it seems that FriendlyARM at least is publishing latest stuff (datasheet and kernel code). After quick check of their github source, I can confirm that they have at least newer video driver code.

@jernej
Hm… since I added a patch for Mali r4p0-00rel0 to Armbian yesterday I had a look into linux-3.4/modules/mali/Makefile first and this looks just like loboris’ kernel with a few fixes on top.

just for reference: Kernel is indeed newer, confirmed by diff.

@tkaiser Thanks for your reply, especially as you seem to be involved in development for those devices! It seems there is an Openelec build now with HW acceleration: http://www.orangepi.org/orangepibbsen/forum.php?mod=viewthread&tid=648 I assume the Orange Pi PC version runs also NanoPi M1. This article mentions a NanoPi M1 version with 1 GB, so I guess I should wait for that. An explanation what I want it for: Soon there will be DVB-T2 with HEVC 1080p 50 Hz in Germany. I want build my own receiver with tvheadend as backend just for live TV and PVR. The off the shelf solutions are either… Read more »

@Christian Jernej’s OpenELEC version for Orange Pi PC will even run without any modification since the only two real differences are: blue instead of red led with different pin mapping, different voltage regulator always at 1.32V (not that good since the SoC gets hotter than necessary). Since shipping costs are rather high if you only need one device Orange Pi PC is obviously the better choice since this is ~17€ (tax free incl. shipping) and the OPi PC stays cooler due to better voltage regulation. With the OPi PC playing 1080p HEVC the temperature just increases by 4°-5°C and consumption… Read more »

@tkaiser
Thanks again for your reply — I really appreciate it!

I just discovered http://www.armbian.com/ and saw that you are very active there also. Is the Orange Pi PC Openelec build based on that in the sense that it uses the same patches and drivers?

Do I understand correctly that the Ethernet driver is not in mainline yet, but supported in armbian and Orange Pi PC Openelec fork or does it currently not work at all?

Thanks for now and see you in the other forums!

@tkaiser
I know, but I think I must stop at some point and start using mainline kernel. It will took a lot of time, but I think it will be worth it.

@Christian
I’m the author of that OpenELEC fork. We are sharing much of the patches and we are trying to stay compatible, but that it is not always possible due to different goals.

@jernej Yes, I saw your id in many posts at http://www.orangepi.org/orangepibbsen/forum.php?mod=forumdisplay&fid=55 and that you already made even a 7 beta. Thanks for your great work! Normally I would not care for an older kernel, as many newer features are not that important for a media box. I ask because of the drivers. My plan was to use tvheadend as TV server — I saw that somebody did it with another stick — with the Geniatech T230 and the LinuxTV page says it it supported since kernel 3.19. So I fear that it will not work with a 3.4 kernel. Or… Read more »

@Christian
Images include backported media drivers from 4.4 kernel IIRC, so your driver should work although that is not always the case.

I plan to go on mainline kernel soon after ethernet driver becomes usable but till then, I will try to integrate opensource VPU drivers.

Small update: NanoPi M1 does use the same voltage regulator as known from Orange Pi One (switching between 1.1V and 1.3V so the only currently available H3 board only using a single VDD_CPUX voltage is Banana Pi M2+) but currently it seems nearly all available OS images for Nano Pi M1 do it somewhat wrong so the H3 will be fed all the time with 1.3V (higher temperatures and if used without heatsink also lower performance since throttling jumps in faster).

At the moment some manual fixes are necessary: http://forum.armbian.com/index.php/topic/1015-nanopi-m1/?view=getlastpost

Help needed: We at Armbian currently try to improve THS settings for Orange Pi One/Lite, NanoPi M1 and Banana Pi M2+. In case anyone a bit more experienced owns such a board without heatsink applied to the SoC please read through http://forum.armbian.com/index.php/topic/1231-testers-wanted-improving-ths-settings/ and consider helping us improve the settings (every OS image and everyone might benefit from later!)

@gitrix
For $5 less you get the pretty similar Orange Pi PC or for pretty much the same end price you get the Orange Pi PC Plus (including case, USB to barrel plug DC-IN cable and shipping). With additional 8GB pretty fast eMMC and WiFi. OPi PC (Plus) is also faster since it has a better voltage regulator allowing higher clockspeeds with less throttling occuring.

FriendlyARM told me they decreased the shipping fee to $5 for NanoPi boards:

Our shipping cost with CHINA POST for one NanoPi family board is $5.
Eventually we improved this. Hope this is a good news for our customers.

@Jean-Luc Aufranc (CNXSoft)
This is really good news. I also hope FriendlyARM manages to improve heat dissipation with their next PCB revision 🙂

@Peter Scargill
Actually not having the Play Store is right way to follow Google’s guideline, but they could provide a convenient way to let the users install it, just like Hardkernel is doing for their ODROID boards.

@Peter Scargill Hmm… I really don’t understand why people mess around with vendor supplied OS images. Using Armbian (not another distro but an automated build system able to spit out OS images for +40 different SBC in the meantime) the whole installation procedure could be moved from your script to image creation by adding the necessary packages to configuration.sh, adding manual installation stuff to extras, tweaking check_first_login.sh so that the mosquitto password will be set at 1st login and so on… All that’s needed is a x86_64 build host (Ubuntu Xenial for best results), then tweaking the image creation process… Read more »

And there will be a bigger version released soon: NanoPi M1 Plus still with 4 USB ports but with Gigabit Ethernet, eMMC and Wi-Fi/BT: https://forum.armbian.com/index.php/topic/2937-next-h3-board-around-the-corner-nanopi-m1-plus/