The first Xiaomi Mi WiFi router brought the cost of 802.11ac WiFi to the masses, and it is now selling for less than $30 including shipping, but the company has now launched Xiaomi Mi WiFi 3 router with some improvements, including a total of 4 antennas and more storage, and sold on e-retailer such as GearBest and GeekBuying for just under $40. 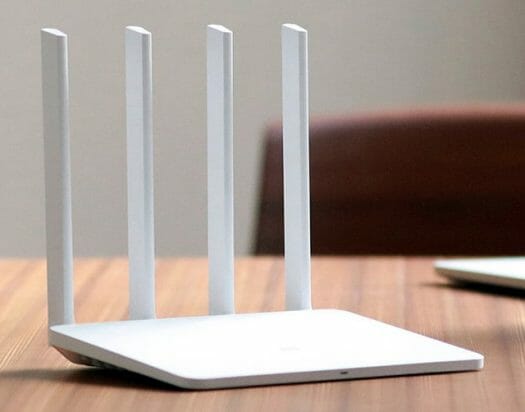 The router runs MiWiFi operating systems with configuration via its web interface, Android or  iOS apps. I understand that the router’s web interface is only in Chinese, but the apps also support English. However, the original router also supports OpenWrt, and considering there aren’t that many differences, the new version should already or soon be supported. You may find more details on the product page in Chinese.

Help me understand why you’ve got a wireless throughput of up to 867 Mbps and you then cripple that with a wired throughput of 100 Mbps. If I’ve got a Gbps network set up then best case is that my wireless devices are capped at 100 Mbps talking to wired machines and worst case is that this device slows my entire network down to 100 Mbps.

Are these solely for wireless devices that connect straight to the internet over a connection that’s capped at 100 Mbps ?

@Andrew That seems strange at first, but based on my testing with devices capable of 433 Mbps and 867 Mbps transmission rate, the actual transfer performance is lower than 100 Mbit for 433 Mbps, and about equivalent to a 100 Mbps Ethernet connection at 867 Mbps. That’s with an AC1750 router located at about 5 meters + wall. In room performance and getting closer to the router should yield better performance. Obviously that for only one device, and if multiple devices are connected to the router, Gigabit Ethernet could provide a performance boost in some use cases. I guess they… Read more »

According to other sellers this is a gigabit router. Can’t wait for an English firmware.

@Marios
they probably got it wrong, xiaomi’s tec-spec’s have it at 100Mbps, plus the soc only has two RMII interfaces, for gigabit support it’d need an external chip connected via pcie…

Does it include free Spying for the Chinese Govt?

@Marios
If you’ve found this in the “Customer Questions and Answer” section on GearBest, you can safely discard it. I’m always amazed at the number of incorrect answer customer support is giving there. That’s mind boggling how wrong they often are. I think they must toss a coin before answering. Head is 100M, tail is Gigabit.

Or maybe they are paid by the number of answers.

It seems to be trend, other recent chinese routers for the china market on another well known site are also 10/100 yet all claiming gigabit, they are being sold as though Cat 5e is so so last year, and its our fault for not using wifi, with broadband now getting upwards of 200-300mbit, erm kinda shots itself in the foot.

Do any ‘so called’ 300/867Mbs WiFi routers really deliver sustained throughput in the >100Mbs range? Aren’t they like ‘so called’ 500Mbs Powerline adaptors (also usually sold with 100Mbs connections)? The claimed speeds are seldom anywhere near what they achieve in real-world situations.

I believe that the product is called “MiWiFi”, not “Mi WiFi” (even though it is part of Xiaomi “Mi” series).

Anyway, unless you are an OpenWRT developer yourself I would wait until they add support for this:

Looks like very capable hardware for the price, wonder when a three band model will come out?

I this were a gigabit router then yeah sure but since it’s not, no thanks. I still care about wired performance and sometimes those 4 gigabit ports come in really handy.

@Harley
That’s a transcription from Chinese, so the space might not be important. As mentioned in the post, it’s almost the same design as Xiaomi Mi WiFi mini router, so the OpenWrt might just work out of the box. That’s unless the 128MB storage is not supported.

@bernstein
MT7620A supports up to 5 Fast Ethernet ports and 2 Gigabit Ethernet ports. The difference is that the FE ports include the PHY and gigabit ports don’t. An external gigabit phy nowadays costs less than 1 dollar, but they prefer to ship a deceptive product.

Any other option for a cheap wired gigabit and AC router ?

Archer C7 TP-LINK is the cheapest I could find. Not xiaomi cheap though. Some people say it’s good but I have no experience with it.

@Methanoid
Exactly, It will include some sort of spyware, like the Tenda.

bernstein :
@Marios
they probably got it wrong, xiaomi’s tec-spec’s have it at 100Mbps, plus the soc only has two RMII interfaces, for gigabit support it’d need an external chip connected via pcie…

Yes, Xiaomi specs say 100Mbps.
No, the ‘A’ variant of the SoC used in this device has two RGMII interfaces. The ‘N’ variant has an integrated PHYs for 5 fast ethernet ports and no RMIIs.

Andrew : Help me understand why you’ve got a wireless throughput of up to 867 Mbps and you then cripple that with a wired throughput of 100 Mbps. If I’ve got a Gbps network set up then best case is that my wireless devices are capped at 100 Mbps talking to wired machines and worst case is that this device slows my entire network down to 100 Mbps. Are these solely for wireless devices that connect straight to the internet over a connection that’s capped at 100 Mbps ? If you have a wired gigabit network set up, how does… Read more »

The spec above is missing lots of important parts: What is the Tx power, Rx Sensitivity (dBm), Antenna gain dB, is there a Guest Account, and of course the typical energy consumption (not the power brick capability) given that it will probably be on 24/7. I would like to see a full test under OpenWRT before considering it further.

@Ravi
Wrong on so many fronts.

Most dual-band routers use a second chip for the 5GHz band, and the WiFi SoC for the 2.4GHz band.
This device is no different, as explained by the other commenter.

Moreover, the MT7621 SoCs don’t have ANY integrated WiFi, and so dual band routers based on them typically include two WiFi chips, one for 2.4GHz and one for 5GHz.

Beyond that, there are multiple offerings in the MT7621 family, including a single core version.

@Harley Xiaomi has a few higher end products. I’d expect their first 3-band offering to appear at those higher price points. Agree about the OpenWRT support. I have the earlier, two antenna, version of this device. It is nominally supported in 15.05.1, but I’ve found it to have serious problems in AP mode, particularly on the 5GHz radio. For that device, the stock firmware is OpenWRT based, but depends on proprietary binary drivers and other non-standard enhancements. There are also 3rd-party OpenWRT based firmwares that use more of OpenWRT, but still depend on binary drivers. I think its good to… Read more »

@Jean-Luc Aufranc (CNXSoft)
Okay, I guess that makes more sense now, thanks for the reply.

eas : Agree about the OpenWRT support. I have the earlier, two antenna, version of this device. It is nominally supported in 15.05.1, but I’ve found it to have serious problems in AP mode, particularly on the 5GHz radio. There are also 3rd-party OpenWRT based firmwares that use more of OpenWRT, but still depend on binary drivers. I think its good to distinguish between OpenWRT and these derivatives. i also have the old 2 antennas version, i did try to find custom firmwares back then but ended up installing stock openwrt (after getting my “dev” access through their android app… Read more »

Did anyone got any idea how many wifi user can be support by this Xiaomi Mi WiFi Router 3 Dual Band APP Control with 4 Antenna? So this router wouldn’t hang or lacking . Just thinking can this be use & replace the original router from ISP in church building?

I am unable to connect my western digital elements external harddrive to the MI router 3. should I use any adapter as it is USB 2.0 interface?

@Lohith
If your hard drive is not recognized there are usually two possible reasons:
1. The is file system is not supported
2. Not enough power.

Question I have one of these working fine on the wireless network, I get ~90Mbps downlaod which is far better than I was getting with the old cisco router (now Bridged) one issue I’ve noticed is that the wired ports are only providing ~2Mbps. I know they’re 10/100 but I thought they would be able to handle more than that. Does anyone know if there is a setting missing? Oh and my internet speed is 240M, i tested the wired network just before switching to bridge mode and was getting ~215M. I uise this over cat5e in the walls to… Read more »

Any news about a new gigabit router from Xiaomi?

Hi !
I’m also interested about a new gigabit router. My network is in gigabit and my internet is in fiber optic (France – 800mb/s).

No news from Xiaomi?

Is it better to have China or US govt spying on you?