A team of developer has come together last December in order to provide Chromium OS, the open source project which Chrome OS is based on, to single board computers such as Raspberry Pi boards. So far, they’ve provided Chromium OS images for Raspberry Pi 2 & 3, but more boards should be supported in the future. 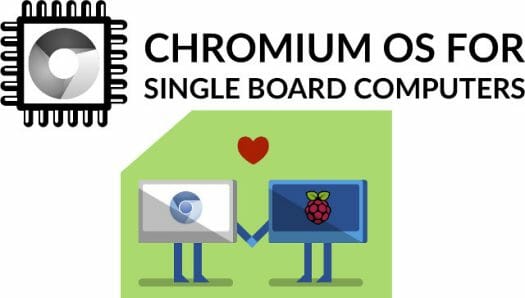 The latest version 0.5 release is said to be usable, but WiFi, Netflix, and HTML5 video are not working. The installation procedure is standard. You simply need to download and uncompress the archive (e.g. SamKinison_v0.5_Pi3_16GB.tar.xz), and dump it on a micro SD card with Win32DiskImage or dd. They have released different images for Raspberry Pi 2 & 3, and different SD card sizes (2GB and 16GB). Chromium OS is using 12 partitions, so that may be why they don’t provide a single image and resize the file system during the first time. You can report issue on their forum or Reddit.

The community has also received several boards from other companies including a few Shenzhen Xunlong’s Orange Pi boards, LeMaker Guitar & Hikey boards, FriendlyArm  NanoPi2, NanoPi Fire, NanoPi M2, & NanoPi M1, as well as a Roseapple Pi board. Pine64 also gave some Pine A64 for development, and one developer recently joined the community specifically to work on Pine64 port.

This looks similar to neverware

Yeah, but it does give us something to dream about. I have a suspicion by the time this reaches version 1.0, there will already be something better, smaller, and faster.

I’m a little puzzled about 16 partitions, though. What does an SBC need 16 partitions? Yeesh. If they want somewhat widespread adoption, they need to work on that.

Trying this now. Raspberry Pi 3 is so slow that it’s a painful experience using it as a desktop replacement with Raspian.