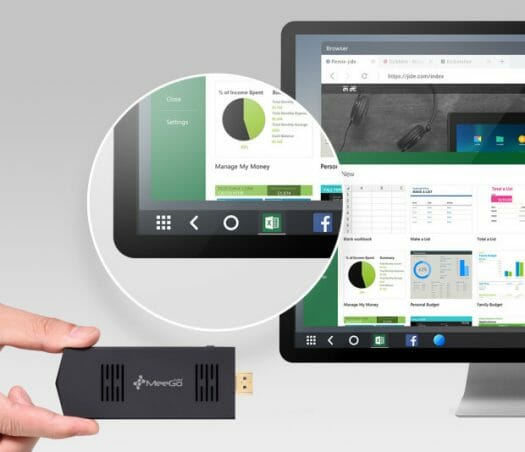 The specifications have not changed much (some features have been clarified), and there are still two models with different memory and storage capacities:

The stick is said to run Remix OS 2.0 with the Google Play store, despite Google having asked Jide to remove the Play Store from their own Remix OS devices.

The 2GB RAM/32GB storage version goes for $49 + shipping, and is now the most popular option. The stick will ship with a power adapter, a USB cable, and a HDMI extension cable. Shipping is free to most of the Western world (North America and Europe), but adds to $5 to other countries. Delivery is scheduled for 30 days after the campaign completes, so perks should ship around August 2016. Alternatively, you could also try your luck to with MeegoPad A02 through their Facebook giveaway.

Any information available which Wi-Fi/BT combi is used? If it’s Ampak AP6212 then this RemixOS image might be a way to ‘unbrick’ the countless Banana Pi M3 collecting dust everywhere 😉