There’s a wide a virtual reality solution from cardboard kits that now sells for a couple of dollars to full featured headset with motion tracking selling for several hundred dollars or more. 3DiVi has designed a Kinect like motion tracking device that connects to your Android and iOS smartphone, and is supposed to offer similar tracking capabilities of more expensive head mount displays (HMD) such as HTC VIVE at about half the cost, while also replacing the cables of those kits with wireless connectivity through WiFi and Bluetooth 4.0 LE. 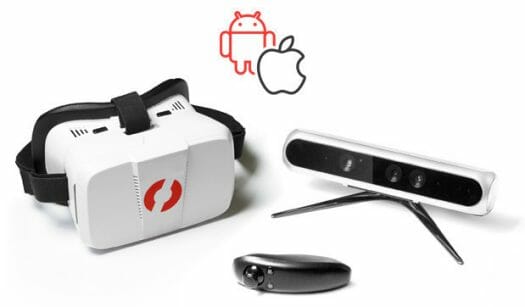 The sensor runs 3DiVi body tracking middleware NUITRACK, works with iOS and Android smartphones, as well as Samsung Gear VR and AppleTV.  Unity3D and Unreal engine SDK are provided to developers who want to develop app for the platform. The head mount display and wireless controller are optional, as you could also use your own.

The company also provided a comparison table against what they consider to be their competitors, namely GOA Nod, STEM Sixense, and Leap Motion. 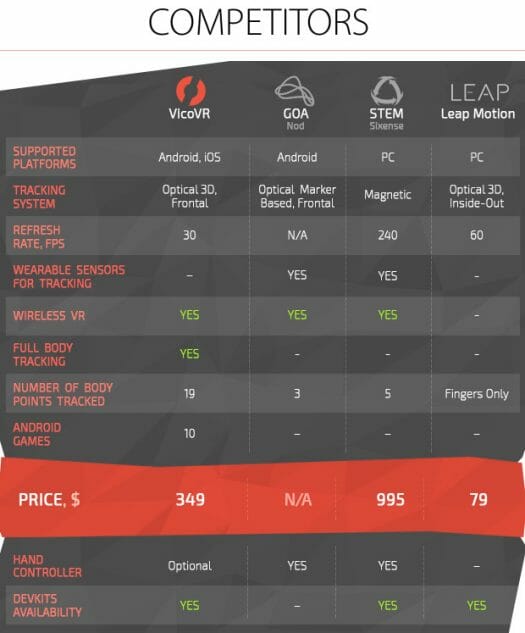 The promo video is quite impressive, but we’d have to see how it will actually perform in real-life.

3DiVi has now launched an Indiegogo campaign, and with 15 days to go, they have already exceeded their $75,000 target. VicoVR with all three items and a micro USB power supply requires a $219 pledge, but if you only want the sensor part, you’d just have to pledge $174. Shipping is free to the US, $10 to Canada, $15 to the UK, Europe, Australia, and Japan, and $30 to the rest of the world. Shipping is scheduled for November 2016, but as usual bear in mind that delays are frequent in crowdfunding projects, and you could well receive it in 2017 due to unexpected technical or manufacturing challenges.

This really looks awesome and i’m sure my kids will love it.
Condering picking a perk really.