SolidRun introduced ClearFog Pro and Base board based on Marvell Armada 380/388 processor at the end of last year, but at the time, only the higher-end ClearFog Pro board was available for $170 and up. Now the company  has officially launched the cheaper ClearFog Base board based on the same processor, two Gigabit Ethernet RJ45 ports, one SFP cage, a USB 3.0 port, an M.2 slot, mPCIe expansion slot, and more. 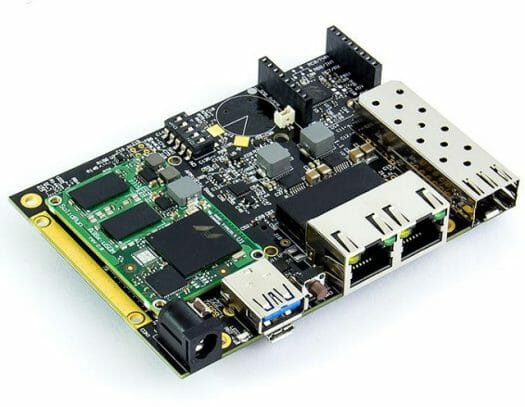 The board is comprised of a baseboard and a microSoM (in green), and runs OpenWrt or a Yocto Project build based on Linux 3.10.x, and other operating systems such as Arch Linux ARM, and Debian also appear to be supported. Hardware and software documentation can be found in the Wiki. 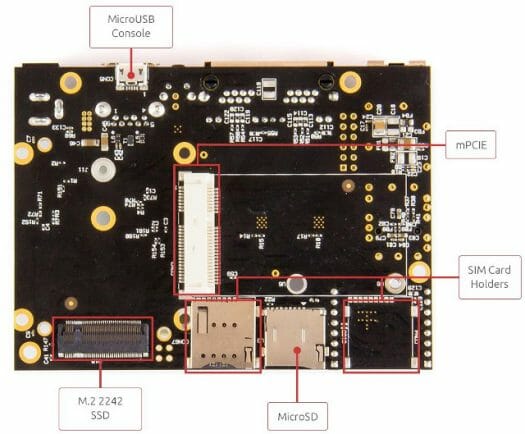 The board sells for $90 without power supply, nor internal storage, but 110V or 220V power adapters, a blank 8GB SD card, and a 4GB eMMC flash are all available as options.

It should be noted that I/O and network performance of these ARMADA 38x based boards are excellent (tested with the larger Clearfog Pro when we ported Armbian to it — expect Clearfog Base to be supported soon) and that both M.2 and mSATA slots can be ‘converted’ to normal SATA ports by using cheap mechanical adapters (might require some SERDES config voodoo in u-boot, Rabeeh from Solid-Run explained details in Armbian forum — Free section, ‘Quick review of Solidrun’s Clearfog’ thread)

Nice board, but SoC doc is where?

Could this run pfSense open source firewall with all drivers?

Exactly the board i was looking for, with the right horse power.
Would like to build an Home gateway with NAS capabilities – saw in smallnetbuilder the Armada 388 gets you full wire speed (FWS).Cannot wait till i get this board.

Where can i find an OpenWRT image for it?

Wow, cool! Exactly was I was looking for. Great board

Can you link to one of these mechanical adapters? All I get with google is the inverse product.

SATA 3.0 and USB 3.0 performance numbers for ARMADA 38x used on the Clearfogs: http://forum.armbian.com/index.php/topic/1925-some-storage-benchmarks-on-sbcs/?view=getlastpost