Zidoo X9S is one of the first Realtek RTD1295 based TV boxes coming to market, and it has some pretty special features like running both Android 6.0 and OpenWrt simultaneously, HDMI input support for video recording and PiP, an external SATA interface, 4K media capabilities including HDMI 2.0a output, 4K 60 fps H.265 and VP9 & 4K 24 Hz H.264 video decoding, as well as HDR and 3D support. You can find the full Zidoo X9S specification in my previous post. The company has now sent me an early review sample, and in the first part of the review you’ll post photos of the devices and accessories, and perform a teardown to find out more about the electronics and thermal design. Later on I’ll publish articles with benchmarks, video performance, and the complete review. 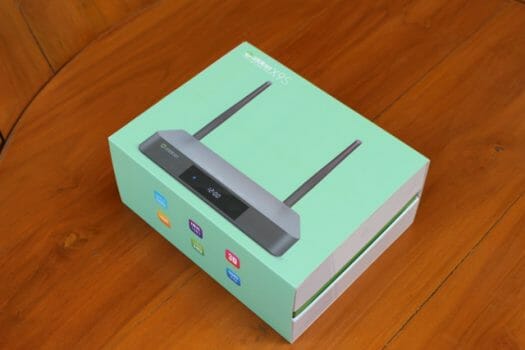 The bottom of the package lists the specifications.

The devices comes with a SATA cable for 2.5″ “laptop” hard drives or SSDs, a HDMI cable, a 12V/3A power supply that should be good enough to handle a SATA drive plus a USB 3.0 drive, an IR remote control with IR learning function, two large WiFi antennas, a guarantee card, and Zidoo X9S “simple manual” in English.

The case is made of aluminum alloy, and the device feels of good quality. It’s also quite larger than most recent Android TV boxes released to market

The front panel includes a VFD display and a window for the IR receiver, while one of the side features the SATA interface, one USB 3.0 port, and two USB 2.0 ports. The rear panel comes with two WiFi antenna connector, a Gigabit Ethernet port, HDMI input and output, AV (composite + audio stereo) jack, optical S/PDIF, a firmware recovery pinhole, a micro SD slot, the power jack, a mechanical on/off switch for power.

You’ll need to loosen the four screws on the bottom of the case in order to take out the metal bottom cover, which comes out very easily.

There’s no direct contact between the board and metal cover, but we’ll notice a shield covering the processor, memory and storage chips. [Update: The black part on top of the shield is “graphite nano thermo material” which helps with cooling]

The shield is soldered to the board, so I have not attempted to remove it, and the bottom of the board reveals the micro SD slot, Genesis Logic GL852G 4-port USB hub, and Titan Micro TM1628 LED Controller found on the small board used by the front panel display.

After removing three more larger screws, I can access the top of the board named “GPT X9S_1295_V1.0”.

Again there’s a soldered shield on the top of main ICs, so we can’t check out the SoC, RAM, and eMMC flash chips. But we’ll find a battery for the RTC, Realtek RTL8821AU USB 2.0 802.11ac and Bluetooth 4.0? chip, and SG24002 10/100/1000M transformer for Gigabit Ethernet (GbE PHY and MAC are inside RTD1295 chip). The serial console / UART header appears to be located between the USB 3.0 and SATA ports. The latter should be a “true” SATA port since SATA is supported natively by Realtek RTD1295 SoC.

I’d like to thank Zidoo for sending an early sample for review, and resellers and distributors can contact the company to purchase in quantities. Zidoo X9S can also be pre-order for $149 on GeekBuying, as well as a few shops on Aliexpress for the same price.

@cnx With all that unused space in the large box surely there should have been room for the SATA drive to be internal ?

As the spec mentions 12V/3A (36W) power, I hope during your review you can check if it has good power management so unused features like eSATA and HDMI-in do not waste energy.

As this is a rare example with 2 external antenna for potentially good WiFi RANGE, 2.4 & 5GHz, and as ‘fast’ does not necessarily mean good range, I hope your review can confirm if it has good range

Curious whether the USB attached WiFi chip is also behind the internal USB hub or not. Also how ‘Android 6.0 + OpenWRT(NAS) dual system run simultaneously’ looks like in reality 🙂

And since internal SATA data and power connectors are prepared on the PCB but unpopulated maybe they come up with another model with internal disk?

@paul Maybe you could even connect the Sata cable, and fold it back into the case and put the disc inside the box?
just a little tiny hole for the cable needed.

Do you think in your upcoming testing, you can review the hdmi in to network streaming (tvheadend)?

Can you please test the video encoding? Especially to see if hardware encoding is supported with third party Android apps.

Nice, we could finally get TV box with HDMI 2.0a (4K at 60fps), 10-bit HEVC/H.265 hardware decoding, full frame 3D MVC support (mkv and iso), USB 3.0, Gigabit Ethernet, proper frame rate switching and proper HD audio pass-through. All other boxes until now sadly lacking something of above.
Looking forward to other part of your review, before I make purchase.

@TLS
I’ll test encoding via the HDMI input app, but which other app can I use to test video encoding?

@Jean-Luc Aufranc (CNXSoft)
Can you try with CameraFi, it should support up to 1080p, if the HDMI port is seen as a “camera”. I’m interested in seeing if the input can be used for streaming video online.

Lucky you! This box looks like itll be a beast.

@Jocke Thanks for your suggestion. Bit of a kluge to have to fix a poor design decision. I never liked the shortlived eSATA fad, rarely see it these days. As tkaiser observed, the pcb has the circuitry to support internal disk, and the box has tons of unused space ! It is as if the maker bought in an outside SBC, stuck it in a poorly matched existing box and other than work on simultaneous Android/OpenWRT OS, rushed it out. What interests me is the potential of good Wifi long range performance via the 2 external antenna, + USB3 +Gigabit.… Read more »

@paul
You can find some benchmarks, and info about OpenWrt (and Android) @ http://www.cnx-software.com/2016/09/09/zidoo-x9s-realtek-rtd1295-android-openwrt-tv-box-system-info-benchmarks/

Can I ask a daft question, could some of these system board design of been original intended for in side a TV, and to work with little or no heatsink and now being shoe horned into Smart TV boxes?

@Theguyuk
No, there are different chips for Smart TVs, as they need to support display panels. For Amlogic, you can find the T8xx processors @ http://www.amlogic.com/#Application/SmartTV/index02.html

Heat from the drive unless SSD would be significant if mounted internally.
Micca did it on some of their boxes and had to go to a larger thicker aluminum box. $$$

friend, where is 2nd part? i think buy it or no and wait for your tests

@Ivan
Part 2 should be posted on Sunday or Monday.

@Jean-Luc Aufranc (CNXSoft)
in your opinion is it good?
it seems too expensive for it.

@Ivan
I have only used it a little bit, but it depends on your usage.
OpenWrt looks good, and I like that you can connect multiple hard drive, something not possible on the vast majority of TV boxes.
HDMI input also supporting streaming, again pretty neat.
4K video decoder has some limitation, for example H.264 decoder only support 24 fps max. That’ enough if you just plan to watch Blu-ray rips for example, but if you also intend to watch 4K videos from 4K (actions) camera or mobile phones (encoded in H.264), this won’t be good.

@Ivan
I’ll have to delay the review further… I had some problem with Internet over the week-end (no Internet), and Zidoo X9S HDMI input app is not working well right now…

@TLS hi, with HDMI input you can only stream non DHCP content, it is not possible to stream from a TV tuner or BR, you need to unlock the protection, i have read somewhere that with some switches or splitters you can break the protection but for streaming from playstation or other game boxes as playing, no problem, and you can choose the bit-rate and capsule(TS or mp4), as also the audio sampling frequency.

And war is a thankless task, it may lead to nothing. We must still work together and make the device better, more stable. I really went too far with the statements, and caused damage to the company Zidoo, in the face of Freeroc manager. For that I apologize. I was not right, the company is working on the bugs and try to make your device better.

@Andrea
You should check the photos above.

Hi
I have read on review this

Once you connect the 36V power supply, the front panel LCD display will show “boot” and the LED will turn blue. A standard boot takes about 40 seconds with my setup, but the very first time, you need to go through the setup wizard.

i can not update the software to 1.4 – just got it – new !
please advice ….
after downloading 1.4.. version, it is starting to update and goes out from app to boot and stop updating…crashes

OS is Android (phone), not “Android TV”. So HBO GO work only wifi intead of Ethernet.