But before starting with the benchmarks, I’ve run HWiNFO64 to get a bit more info about the system, and the processor in particular. The processor is the quad core Pentium N4200 stepping B0/B1 with sSPEC SR2Y9/SR2Z5 clocked between 400 and 1,100 MHz, and up to 2,5 GHz in burst mode. It also comes with a 18 EU HD graphics Gen9-LP.

IMHO, PCMark 8 Home Accelerated 3.0 is one of the best benchmark as it replicates typical use cases such as web browsing, video conference, light gaming, photo editing, and so on.

Voyo VMac mini gets the highest score (1,846 points) of all devices I’ve tested so far, with the previous top performer being MINIX NEO Z83-4 (Atom x5-Z8300) with 1,543 points. You can check the score details here.

PassMark PerformanceTest is also a popular benchmark. I started with version 8.0 in order to be able to compare to older platforms. Voyo VMac Mini got 1052.1 points comparing to 845.9 points for Beelink BT7 (Atom X7-8700). 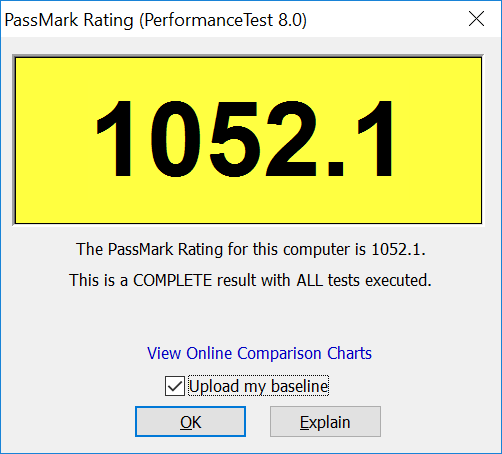 PassMark has now released PerformanceTest 9.0, so I also ran the test for this version for future reference. Result: 1087 points.

We’ll notice the score is also impacted by the FORESEE SSD inside the device, which has a very good score. I’ll provide more numbers about storage performance in the review, but sequential read speed reaches over 500 MB/s.

I compiled a table comparing the performance of other low power mini PCs with devices I’ve reviewed myself, as well as others like Intel Compute Stick based on Core M processor.

Note: 3D Mark Ice Storm benchmark’s scores have been divided by 20 for scale.

As expected the Core M platform is considerably faster than all other mini PCs based on Cherry Trail, Braswell, and even Apollo Lake. GPU performance of Pentium N4200 is similar to Intel Atom x7-Z8700 and Intel Celeron N3150, despite using respectively 18, 16 and 12EU HD Graphics Gen9. However, we see a clear boost in performance for the Apollo Lake mini PC with Passmark 8 and PCMark 8, with a gain of roughly 20 to 30%.

If you think it’s worth it, and don’t mind about the slight fan noise, you could consider purchasing Voyo VMac Mini with Intel Pentium N4200 “Apollo Lake” Processor from GearBest for $235, who provided the device for review. Other shopping options include Amazon US and GeekBuying.