I’ve run HWiNFO64 before running the benchmarks to get more details about computer, and especially the processor. Celeron N3450 is a quad core processor clocked at 400, 800, and 1,100 MHz, and up to 2.2 GHz in burst mode. It’s quite similar to Pentium N4200, except the later has a higher burst frequency (2.5 GHz), and a better GPU with 18 EU, instead of just 12 EU on the Celeron. My exact version of the processor is stepping B0/B1 with sSPEC SR2YA/SR2Z6. I forgot to comment about supported features compared to Cherry Trail and Braswell processors yesterday, and Apollo Lake processors do support some extra CPU features including RDSEED for random generators, SHA for SHA-1 & SHA-256 hashs, SMAP (Supervisor Mode Access Prevention), and MPX (Memory Protection Extensions).

Let’s move on with the benchmarks staring with PCMark 8 Home Accelerated 3.0. 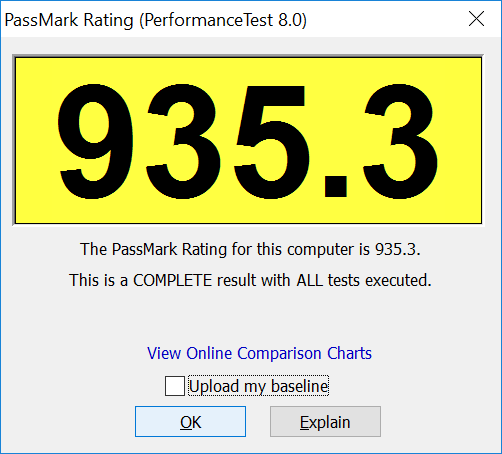 Results: 998.4 points which compared to 1087.0 for N4200. The performance delta roughly matches theory, especially once we look into the details with the CPU mark also identical, but 2D & 3D graphics quite faster.

Based on those benchmarks, the performance of Voyo VMac Mini with Intel Celeron N3450 (Red on chart) is nearly identical to the one of Vorke V1 based on Intel Celeron J3160 (Dark green on chart) both for a general computing benchmark like PCMark 8, and 3D graphics. Fire Strike however failed to run on Vorke V1. Both N3450 & J3160 SoC come with a 12EU HD Graphics gen9 GPU which may explain the similar performance for graphics. Overall the performance differences between Cherry Trail / Braswell and Apollo Lake processors are more incremental, than a big jump in performance, and for many tasks you’re unlikely to see much differences between systems, except for the more expensive Core M computers and sticks. Anyway, thats’ what I intend to find out in the review.

I’d like to thank GeekBuying for sending the sample for review, and if you are interested you can buy Voyo VMac Mini (N3450) for $199.99.