I’ve just posted Voyo V1 VMac Mini review with Windows 10 this morning, and at the end I mentioned I quickly tried to run Ubuntu 16.04 without success. Reader Piotr who also happens to be a LibreELEC together with about 65 other team members, noticed it, provided me a link to a development version of LibreELEC 8.0 (mirror link) working with Apollo Lake processors, and explained Ubuntu was not working because Linux needs updated Mesa and Intel drivers. The image is based on Linux 4.10-rc5 with the necessary drivers and Kodi 17. The changes were mostly made by FernetMenta (Rainer Hochecker), and will be merged in Linux 4.10 and Mesa 17.0. He also implemented 10-bit HEVC support that will officially be available in Kodi 18 only and found in daily builds.

So let’s try this out. After downloading LibreELEC-Intel.x86_64-8.0-devel-20170130110609-r25167-gd210441.img.gz, I tried to flash it (N.B.: no need to extract it) from my Ubuntu 16.04 PC with LibreELEC USB-SD Creator, but for whatever reasons neither the 32-bit nor the 64-bit versions of the tool would work, so I did this in a Windows laptop instead. After that I inserted the flash drive into Voyo VMac Mini, and pressed F7 to bring up the boot device selection menu to select the USB flash drive, and within a few seconds I got LibreELEC installation prompt, so this looks good. Please ignore the vertical lines in the photos below as it’s just an issue with my TV. 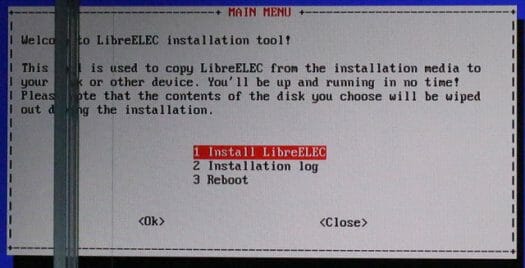 I selected 1. Install LibreELEC and OK to go to the next screen where I could select the installation device. 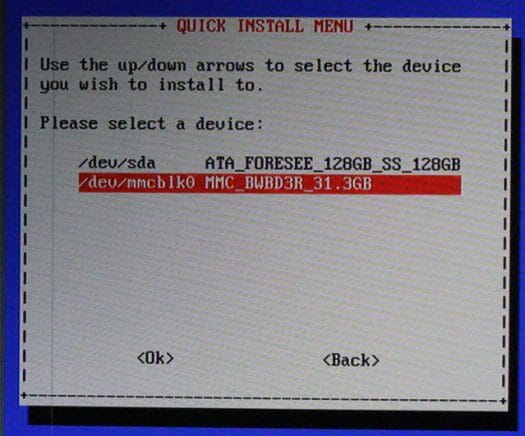 This is where VMac Mini having two storage devices becomes convenient, as Windows 10 is installed in /dev/sda (128GB SSD), but the 32GB eMMC flash in /dev/mmcblk0 is no used at all, so I selected the latter in order to have a dual boot Windows 10 / LibreELEC installation. 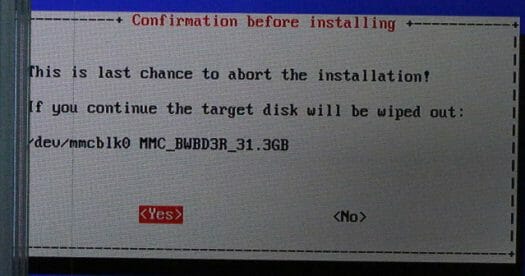 The installation script will then ask you twice to confirm your want to install LibreELEC and completely wipe out the target disk, and once you’ve confirmed the installation will take a few seconds, and you’ll be asked to reboot. As the system reboots, press F7 until you enter the boot device selection menu.

Windows Boot Manager should still be here (as default option), and there should also be a new “UEFI OS” option for LibreELEC. So I have tried and within a few seconds, I got to LibreELEC / Kodi 17 user interface. Success! 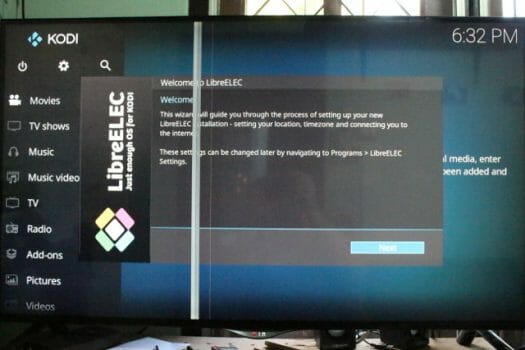 I went trough the setup wizard, and then configured the system to access videos on a SAMBA share. I could play 4K videos with H.264, VP9 and 10-bit H.265, although with some artifacts at the beginning of the H.264 video, but I had no audio… I went to the settings, and changes the Audio device from “HDA Intel PCH ALC296VC Analog” that probably outputs audio via the 3.5mm audio jack to “HDA Intel PCH ONK TX-NR636 on HDMI #1”, and audio worked through my TV’s speakers.

A Rec.2020 video did not play properly (horizontal bands shown), so there are still a few issues with video playback, but it’s a development version, and I’m expecting it to improve overtime. But let’s see it HDMI audio pass-through is also working, and there are options for Dolby TrueHD and DTS HD, all good!

Oh oh! Not quite, I had no audio at all. So I checked the passthrough output device in the audio, and changed it to use TX-NR636 receiver on HDMI #1. 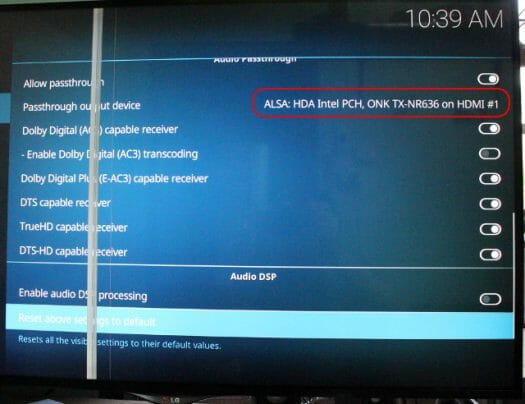 But did it work? The photos below may give a clue… 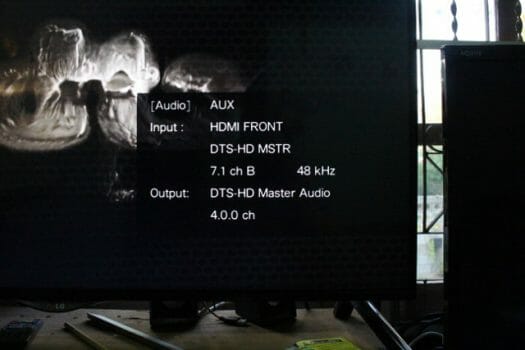 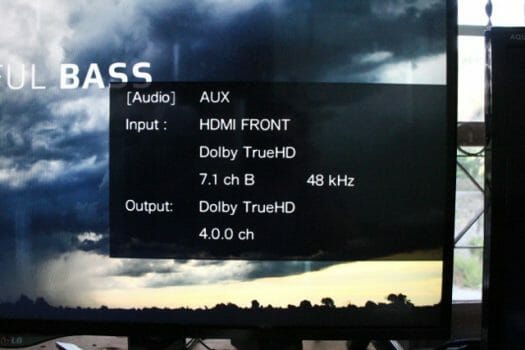 All popular audio formats supported by my AV receiver worked fine: Dolby Digital 5.1, Dolby Digital+ 7.1, Dolby TrueHD 5.1/7.1, DTS HD Master and DTS HD High Resolution. So LibreELEC is quite better than Windows in that respect. Note that Apollo Lake motherboards or mini PCs with HDMI 2.0 may not support HD audio pass-through right now, but the good news is that it could be a driver issue and Intel developers are involved in solving it.

If you are not that interested in LibreELEC, and would like to run Ubuntu 16.04 or another distribution instead this should also be possible, but you’ll have to do some work by modifying Ubuntu 16.04 ISO with a recent Linux 4.10 kernel, and possibly Mesa development branch if you’re not going to run a server image.

Apollo Lake motherboards or mini PCs with HDMI 2.0 does not support HD audio pass-through, because using HDMI (2.0) connector you’ll pass thru DisplayPort–>HDMI bridge, it does not support them. Using DVI connector, instead, you’ll lose [email protected] and HDMI2.0, but will gain audio-passthrough again.

I’m hoping that Apollo Lake will turn out to be a decent platform for running Linux, unlike Baytrail which has been a headache.

Nice guide. Exactly what I was looking for. Do you think we are going to see this running on the upcoming kaby Lake nucs too?

“A Rec.2020 video did not play properly (vertical bands shown)”… I had to chuckle when I read this, given that you’re watching it on THAT television 🙂

@RobBrownNZ
🙂 That’s funny, and I must have seen that vertical lines for too long, as I meant “horizontal bands”.

have you test this driver??

Braswell is Airmont, whereas this is Goldmont.

Hi there,
this was with the N4200-powered sample. Can I just assume the HD-audio passthrough will also work with the N3450?

I was wondering if there is any progress with regards to installing any Linux distro with a desktop interface on the Vmac? Do you still have to do modification to run it?