We’ve already written about Android 7.1 on Amlogic earlier with week with an overview of the system and SDK from a developer, and there were some issues and user interface inconsistencies. However, I’ve just seen GeekBuying is now taking order for Amlogic S912 powered Mecool KM8 P TV box running Android 7.1 for $38.99 and up. 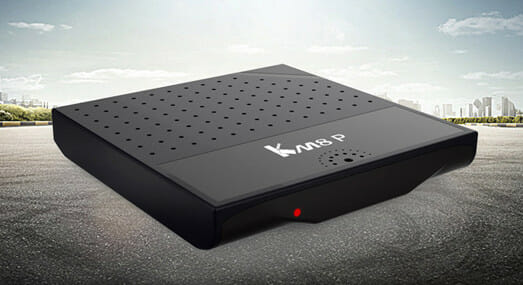 The box ships with an IR remote control, a power adapter, a HDMI cable, and a user’s manual. It’s running Android 7.1 with Kodi 17. 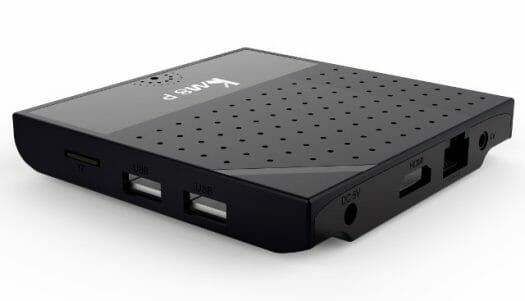 @hex
As a Linux server most probably, but not for LibreELEC/OpenELEC. They are missing some drivers for S912 support.
If you want to install Linux, then you don’t really care about the version of Android, and you could buy one of the many other models based on S905/S905X.

@Jean-Luc Aufranc (CNXSoft) text for the article on the front page reads 1 or 2GB DDR3 Storage instead of RAM.

@sandbender
The excerpt code is not really pretty for lists on the main page. It actually shows “System Memory – 1 or 2GB DDR3 Storage – 8 or 16GB eMMC” without bullets.

@Jean-Luc Aufranc (CNXSoft) I’m having trouble choosing between the available options. Could I get a recommendation? What’s a good place to start? I’ve been looking for an affordable ARM machine to run simple visuals and interactive displays. I’d also like to have a very simple system for playing around with writing NEON and OpenGL-ES code that I’ll later port to to Android (NDK). I don’t need anything fancy. I’m currently using a chromebook/crouton setup, but the hacked up mess that is crouton/chroot is a constant headache – so I’d like something a little simpler. The RPi and clones seem to… Read more »

@geokon Have you already looked at ODROID-C2 (S905) or Khadas VIM (S905X) boards? Both have decent support. The ODROID board might have slightly better support (TBC) since it’s been around for longer. But both companies provide good documentation. GPU support normally comes with userspace and kernel drivers. The latter are always open source, but the former is not, and I don’t think it’s going to change. You’d still be able to run you own OpenGL ES app. One reader “blu” has done work on several boards with OpenGL, maybe he can comment here if he see my/your comment. I know… Read more »

Wow, so many vents!

@Jean-Luc Aufranc (CNXSoft)
Since GPU has been mentioned: some readers/contributors in ‘Armbian for Amlogic S912’ thread were very excited about S912 containing Mali T820MP3 (vs. old and boring 450MP3 on S905) since T820 also features ‘Vulcan’ and OpenCL 1.2 support. Didn’t follow closely (or at all) but I believe there the usual Mali problem is present too (no useable userspace BLOBs)

@Jean-Luc Aufranc (CNXSoft) Thanks for that link. Blu has an interesting setup, and in the same vein as what I’m interested in as well. I’m definitely keen on the Odroid, but I hear it takes forever to ship and it’s about 2-3x the price of the NEXBOX A95X – so I had to ask 🙂 (and I get that there is a bit of a “you get what you pay for” element going on here as well) As for the OpenGL (I’m really trying to dive deeper into shader recently) when I read things like this: http://baylibre.com/elc-2017-3d-mainline/ What are they… Read more »

@tkaiser
(sorry if this is a naiive question)
So is the silicon completely unusable at the moment? Or there are drivers, but they only work with Android? Or is it just used for video decoding? ( I guess I’m trying to wrap my head around why it’s there is there is no way to interact with it! 🙂 )

@tkaiser Mali-T820MP3 in S912 has only a marginally better performance compared to Mali-450MP4 used in S905/S905X, but it does support OpenGL ES 3.x. Normally, Amlogic provided the framebuffer driver for the GPU drivers, which is useful for media players based on Linux, but can’t be used with X11, which requires an X11 GPU driver. That’s why image based on LibreELEC/OpenELEC used to come faster than Ubuntu images with GPU acceleration. Now it seems Amlogic has stopped providing framebuffer drivers for S912, so LibreELEC developers are not so happy about it, but I’ve just seen @Peter mentions they’ve used librybris for… Read more »

@geokon TV boxes are cheaper, but to get started I’d really get ODROID-C2 or Khadas VIM board, and once you are more comfortable/knowledgeable with the platform, you can try to run whatever you want on cheaper hardware. The main reason is that you won’t be alone on development boards to solve your issue, but on TV box, there will be some small differences in terms of drivers and device tree files, and you may be the only one really working on it. Companies normally release userspace binaries that work with a given kernel version. For example, and I use random… Read more »

@Jean-Luc Aufranc (CNXSoft) I think you’re right and I should start with a more accessible system before diving into the rabbit-hole of TV boxes 🙂 So normally the framebuffer and X11 driver are separate from OpenGL, but with libhybris people are getting the android OpenGL drivers running and then getting X11 running over GLX. And so the BayLibre guys are rewriting the binaries (or adapting the old one?) to run on mainline linux Am I correct in understanding that when you say “userspace binaries” these are what basically transform the OpenGL graphics pipeline and your GLSL into the hardware-specific assembly… Read more »

@geokon I have never developed for OpenGL (ES) myself, so everything I say if from a higher level perspective, i.e. I don’t know the implementation details, using what I’ve read over the years. All drivers implement OpenGL, but the “glue” (API) is different whether the content is rendered in Android, X11, or the framebuffer. All those are close-source binaries, and cannot be modified. In an ideal world, you’d get Linux drivers, but in the real world, many devices are only sold with Android, and companies don’t want to spend resources to develop Linux specific drivers. BayLibre is working directly with… Read more »

cnxsoft : Normally, Amlogic provided the framebuffer driver for the GPU drivers, which is useful for media players based on Linux, but can’t be used with X11 Yeah, I know. Same problem with other SoCs that rely on Mali and where only one variant is available but not the other 🙂 To be honest: I don’t care that much or at all about ‘Mali and X11’ or TV box use cases but based on my understanding Kodi/LibreELEC need ‘Mali acceleration’ here only to draw parts of the UI since video acceleration is still something differently? Anyway: I wasn’t referring to… Read more »

Hmm… I stumbled accross a rant by someone mentioning an impressive ‘GPU downgrade’ when comparing S812 with S905 (Mali-450MP6 vs. Mali-450MP3). The MP number is the count of shader cores? Mali450 seems to allow variable clockspeed and Amlogic claims 750MHz with S905, is this number confirmed (as with their CPU cores 😉 )?

@tkaiser I now avoid adding a number after MP… 😉 But I broke that rule. Some GPU has unified cores, but ARM Mali GPUs have shader cores (aka fragment cores) and vertex cores. It’s unclear from their naming convention how it works. For ARM Mali-450 I could see diagram with a single Vertex core and up to 8 shader cores as shown on the diagram @ But in other documents from ARM I can see a dotted line inside the Vertex core like if there was two. So the number in name must be the number of shader cores, which… Read more »

According to ODROID-C2 FAQ,

ARM Mali-450MP3
In fact there are 5 GPU cores.
3 fragment(pixel) processors and 2 vertex shader(geometric) processors.
But normally we are counting the number of fragment processors only in this industry.