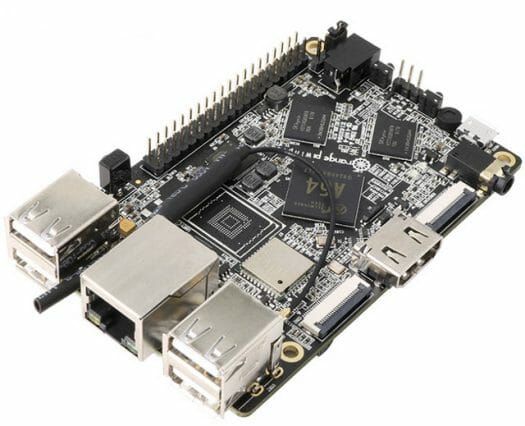 That board is just an update to Orange Pi Win board with the only difference I could find being the 2GB RAM:

The company has released Android, Ubuntu 16.04 “Xenial” Server & Desktop, and Debian Jessie Server & Desktop images for the board on the resources page. Windows 10 IoT support is coming later thanks to a partnership between Allwinner and Microsoft. It’s also possible community images will also become available. 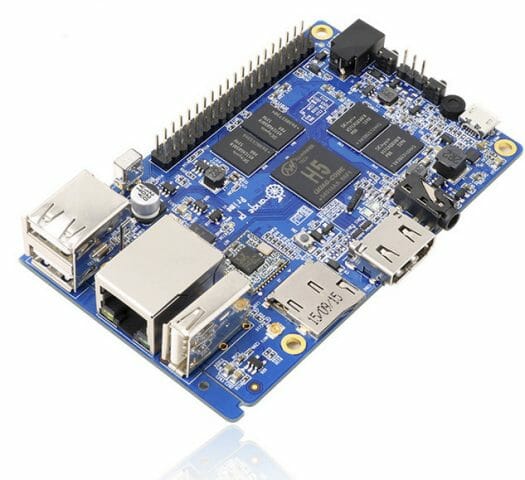 Orange Pi Prime required a new PCB layout, but it still shares many of the features found in Orange Pi PC 2 (changes highlighted in bold):

Xunlong has released four OS images on their resources page: Android, Ubuntu Desktop, Arch Desktop, and Debian Desktop. Since the board is so similar to Orange Pi PC 2, except for the extra memory, wireless module, and reset button!, and Orange Pi PC 2’s Armbian Ubuntu Xenial server & desktop nightly build images with Linux 4.10 are available, I’d expect an Orange Pi Prime build soonish. Note that while Armbian image with mainline Linux may have improved security and potentially better performance, a few things like GPIOs may not be working yet.

Orange Pi Win Plus is sold on Aliexpress for $29.99 shipping, and Orange Pi Prime for the exact same price.

Regarding OPi Prime that’s strange since to me it seems that board has exactly same dimensions and connector placement as older OPi Plus 2E. So either description above or in linux-sunxi wiki must be wrong: http://linux-sunxi.org/Orange_Pi_Plus_2E 🙂 Now it gets even stranger since from a software point of view OPi PC 2 and Prime are identical (different amount of DRAM doesn’t matter). Only exception: RTL8723 Wi-Fi/BT is here so it’s just taking the driver (used with Pine64 or C.H.I.P.) and adjusting contents of a few files like /etc/modules to get everything up and running. If pin mappings of leds and… Read more »

@tkaiser
It looks like getting dimensions right is one of the most difficult part on Orange Pi boards.
I also get 108x57mm on Orange Pi Plus 2E @ http://www.cnx-software.com/2016/04/26/orange-pi-plus-2e-development-board-with-gigabit-ethernet-2gb-ram-16gb-emmc-flash-to-sell-for-35/, but it was marked as TBC at the time.

Of course. A64 has one USB2 host port and one OTG (that can be turned into a real host port) so you end up with 2 ports max and everything connected to the USB receptacles has to share bandwidth (hub is on the lower PCB side). The Prime is the one you want when looking for an USB2 NAS these days 🙂

After last year’s embarrassment about the Amlogic S905 performance and clocking misinformation, I’d hope to see some clear statement from somebody about the clocking and performance of Allwinner H5 which is obviously a direct competitor of Amlogic S905. The Allwinner A64 has been unambiguously described as having 4 x 1.2 GHz Cortex A53 cores in Orange Pi Win Plus but the Allwinner H5 in Orange Pi Prime seems to be shrouded in mystery. What’s the problem? Surely the manufacturer knows!

@LloydS Allwinner A64 devices when being queried by pseudo benchmarks like geekbench or tools like CPU-Z in Android will tell you 1.3GHz and H5 will tell you 1.5GHz. Both are numbers without meaning 🙂 ‘Clockspeeds’ are not related to ‘performance’ without taking the fab process and other details into account. Heat/throttling is a real issue (everytime you would need ‘performance’ the clockspeeds get down anyway). And if you’re talking about the use cases these devices are made for (TV box, gaming consoles) the CPU cores and their clockspeeds get even more irrelevant (better check the video engine’s capabilities and the… Read more »

@tkaiser tkaiser : @LloydS ‘Clockspeeds’ are not related to ‘performance’ without taking the fab process and other details into account.. Yes, but they are clues that we try to use to form an educated guess about the likely performance. Allwinner seem reluctant to disclose the H5 fab process so I’m obliged to guess 28 nm, like S905 but it might well be 40 nm which would explain their lack of candour. Given your input that H5 is clocked at 1.5 GHz and assuming that H5’s Mali 450 is clocked like S905 (another wild assumption) I can reasonably form the view… Read more »

@LloydS
H5 and A64 are almost certainly 40nm, at 28nm they would clock higher.

@LloydS A64 is confirmed to be 40nm so I would believe H5 is the same. To run this thing at high clockspeeds you need to feed a higher voltage which will then lead to thermal problems. Anyway: with Allwinner’s BSP kernel on those H5 Orange Pi voltage regulation seems still to be broken so you end up with 1.0 GHz, with mainline kernel you can exceed 1.3 GHz (the 1.5 GHz mentioned above are the same as the 2.0GHz S905 has been claiming: a setting that can’t work) but at least in Armbian with default settings it’s limited to 1.3GHz… Read more »

@tkaiser
>want to run a Desktop Linux (or Android) the random write performance of your storage media is the most important factor if you look for ‘performance’.

Also sufficient cooling and some sort of 2D acceleration is also preferred.

@tkaiser
I’m not sure the Prime would be the best choice for a NAS. The H5 has a 1Gig GMAC but a 100M PHY so while it’s technically a “Gigabit” card, it’s limited to a 100M physical connection. Sourced from the datasheet. I can’t tell if it’s the same case with the A64, the datasheet just lists the GMAC, not the PHY.

@sandbender
Manufacturers have two options:
1. Use the built-in 100 Mbps MAC+PHY interface for cheaper models but limited to 100 Mbps. They only need to add a transformer to the board.
2. Use the Gigabit Ethernet MAC with external Gigabit PHY/transceiver + transformer delivering Gigabit Ethernet.

@sandbender As others explained the integrated PHY is only there for cheap designs. What’s more interesting with those Allwinner SoCs is that some of them seem to contain two different/independent MACs. In linux-sunxi community we discussed that a while ago and some members speculate that it should be possible to expose both to the outside but no board vendor actually did (maybe since no Allwinner reference design available showing this?). This would be really nice to have one Fast Ethernet (maybe using also an internal PHY) and also an GbE NIC at the same time. On the other hand all… Read more »

@tkaiser Block diagram for the H6 shows two independent EMACs. Need the reference manual to see if it is really two controllers. I seem to recall someone got this working on the A20 but the website for it is gone now. There are definitely not two EMACs on the A64. If you look at the way AW draws the block diagram for the A64 there is only one EMAC square. On the H6 diagram there are two. When making the silicon it may be simpler to just make two EMACs than it is to try and hook their internal FE… Read more »

Jon Smirl : @tkaiser Block diagram for the H6 shows two independent EMACs. Sure but maybe pins are multiplexed? Let’s wait and see. In the meantime I compared Xunlong’s sys_config.fex of OPi PC 2 and Prime and apart from Wi-Fi/BT changes there are only two notable differences: usb_id_gpio/usb_det_vbus_gpio use a different pin (now PA21 and PG12 before) and spdif_used is 1 on Prime while being 0 on PC 2. So it seems Prime will be a bit more audio friendly than PC 2 before and it still seems possible to provide one Armbian OS image for PC 2, Prime and… Read more »

Which case is compatible with the prime card?

@tkaiser It’s still not enough to convince the RPi community to switch. The clones seem more powerful these days, especially now with 2 gigs of RAM. Maybe the CPU cores are quite decent in Rpi3 vs the other boards, but the lack of multiple USB hosts, shared BW for eth and USB starts to look really bad. But I’m still sure that Rpi4 will be sold out immediately once it will arrive. It doesn’t really matter if the specs don’t improve significantly. It will sell millions nonetheless. Just changing the PCB board color would boost existing RPi 3 sales more… Read more »

Schematics released for these 2 Xunlong boards and 2 more: http://linux-sunxi.org/index.php?title=Special:RecentChanges&from=20170411062833 (release history of both OPi Win and Win Plus is funny)